Tribulations of the Trialist : What is (or isn't) Wrong with Mauro Rosales?

What role will the Sounders captain play as 2013 resolves?

Share All sharing options for: Tribulations of the Trialist : What is (or isn't) Wrong with Mauro Rosales?

Mauro Rosales has experienced an inconsistent season with the Seattle Sounders, and a performance record with an impressively varied response. On July 10th, Dave garnered significant debate at S@H, stating:

Tuesday's practice involved a lot of tight spaces or one-on-one dribbling skills. The variety of games really emphasized quick decisions, controlled passes in small spaces and players that can slip through gaps themselves. It was a day built for #10s and those that can fill that role during a sequence.

It was a day for players like Mauro Rosales. Not the crossing Rosales booming in from the flank, but the Mauro of this year. A year removed from flinging a ball onto Eddie's head from everywhere Rosales is now the Key Pass leader, the Through Ball leader, second in assists, first in crosses and third in Big Chances created.

Some have opined, throughout the season, that an aging Rosales is best used off the bench, or even that he has little place in the 18. To the latter opinion I responded, back in April:

Probability of his improving the team while serving in a rotational role? Quite high. The team simply doesn’t have enough quality service from the flanks or creative players overall. Mauro doesn’t need to play every game, but currently he’s needed on the team.

... but there's little doubt that Mauro's public acclaim has fluctuated throughout the year. His first two seasons exhibited streakiness as well, but with 11 games to play he has 6 assists on the year to match with the 13 apiece in '11 and '12. Although his 3 goals match 2012's output and are not far off 2011's pace, he's missed a few glaring opportunities in recent play, and finishing has never been the most vital aspect of his game in the Northwest. Commentators praised Rosales' 60th minute entry into the derby on Sunday, but didn't substantially gainsay the Designated Player's exclusion from the starting XI. So, how (and when) has Rosales performed? 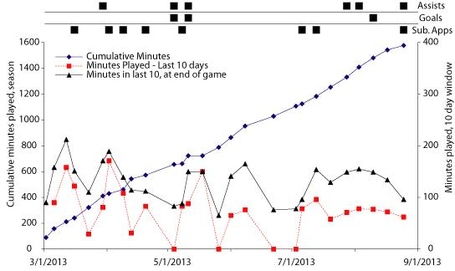 The usage pattern under Sigi Schmid may be telling. As far as performance may be measured by goals and assists, Mauro Rosales experienced a significant drought in June/July as well as a dry period to begin the season. Playing time has been more erratic than in previous seasons. Rosales has logged over 80 minutes 6 times this year (June 8th the most recent) out of 26 appearances, and played the full 90 exactly twice (the last being March 30th).

Does Rosales need the rest, and is he noticeably more effective having received it? We might expect passing accuracy or frequency to decline with more time spent on the field, below we see the accuracy of passes (not including crosses or throw-ins) vs. minutes played in a ten game day window. 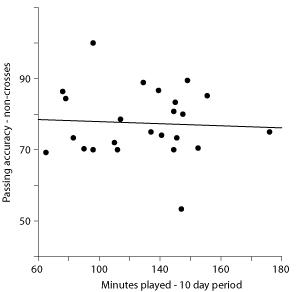 There is no relationship, and I haven't found one yet over a range of different stats, using either a 4 day or a 10 day window. If there is an impact of rest on Rosales' performance it does not appear to be measured by the stats OPTA collects or it is concealed by other variations in play. Substitute appearances, instead, have a modest impact on performance:

However, with only 6 substitute appearances (after stripping off 2 outliers with only about 3 trackable actions), these differences can't explain much of the variation in Rosales' season performance. 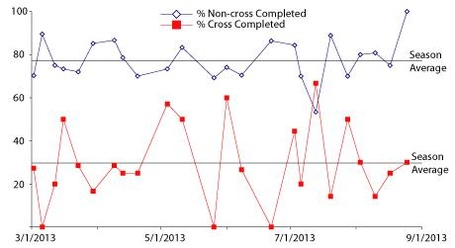 We would expect crosses to be a bit more erratic given the small volume. In accuracy of both types, Rosales shows a decent amount of game-to-game variation in his stats, and had runs of below-average performance in the early and mid-season. 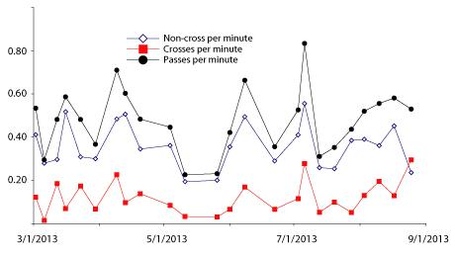 As a keystone for offensive distribution in the Sounders' lineup, one would expect Rosales' to receive and deal the ball on a regular basis when the team is performing as designed. For an extended period (with some notable exceptions), May-July, he struggled to find the game.

As with passing accuracy, game-to-game consistency is somewhat lacking in the record.

Ultimately, is Mauro a different player than in his first two seasons? Even here, the differences are slight apart from playing time and other patterns of usage. Taking a random sample of 14 2011 appearances...

There would be a more noticeable difference in passing rate if not for the substitutions. Still, in accuracy and involvement in the game Mauro seems a very similar player in every respect apart from "key passes," generating shots. How much control does an individual player have over key passes, and is this a strong measure of dangerous play? That's a question for a later date, and a larger one than may be solved with one player.

So... attempting to answer the question stated at the outset:

1. Rosales has neither been as good or as durable as has been shown in previous years, and this is not a surprise for a player of his age receiving the excessively physical attention of aggressive defenders focused on cutting off service.

3. What's wrong? Not much. Rosales can still provide cultured passes from outside the box. He's valuable both as a substitute and as a starter, particularly when the dimensions he provides are otherwise lacking in the Sounders attack (as was the case on Sunday). However, the level of his performance may be erratic, and - trusting to Sigi's usage - he is unlikely to be fit for 90 minutes. As the team is designed for the Cup (or even the Shield) run, it should take advantage of his talent as it has done in the past. It must also be ready to succeed without him.