A game with potentially significant playoff implications has come to harsh our Clint Dempsey buzz.

You'll be forgiven if you're a little distracted from this weekend's game. After all, the Sounders have almost certainly (multiply confirmed, but not announced) just made the second biggest signing in the history of the league, behind David Beckham. If/when Clint Dempsey joins our midfield, the spine of Dempsey, Osvaldo Alonso, Eddie Johnson, and Obafemi Martins won't just be the best in the league, it will lap the rest of the league. That is a four player spine that can win Supporters Shields and MLS Cups.

But it hasn't happened just yet. And today's isn't a game we can just coast through in a happy, drunken haze. If you saw my playoff odds from the beforetime when Dempsey to Sounders rumors were just for laughs, you'll know that we're projecting 4 Western Conference teams to finish within a point of each other at the edge of the playoffs, and Seattle's one of them. That's crazy-pants. . four teams within a point. That's a hell of a playoff race. Now, adding Dempsey should bump up Seattle's points pace. . we'd certainly hope so. But giving a point, or — if worse comes to worst, three points — to FC Dallas, which is also one of the teams in that pack of 4, would be a really bad move.

You will of course remember the last time the Toros came to town. It was in the middle of a brutal May schedule in which somehow Seattle was racking up points. And that included the FC Dallas game, in which Schellas Hyndman opted to play the highest defensive line I've seen in a long time against some of the fastest strikers in MLS with a young defense and he got destroyed for it. It was only Michel's wizardry on the dead ball (including an Olympico) that kept the score close. For Seattle, we thought that May run would transition into a relatively easy June and July schedule and they'd make a push for the Shield. But frankly June was meh and July sucked. We need August to get off on a good footing if we want to put this playoff race behind us.

For Dallas, that loss put them into a tailspin. It was only their second loss of their first 12 matches, but now they've only won one game in the 9 matches since. They were at one point Supporters Shield leaders and now they're fighting to make the playoffs. Much of that has been without Blas Perez, but really they have enough offensive talent to overcome that loss. Between Eric Hassli, Kenny Cooper, and David Ferreira — plus Michel's foot on free kicks — they should be able to score, and yet they haven't scored in their last 4 matches. And the defense hasn't been any better. Other than two scoreless draws with Chivas and Montreal, they haven't had a shutout since May. With Perez and George John (who missed the last game in Seattle with an injury), this is a better Dallas team. But Seattle's control over them in the last match was so total and their recent form so terrible that the Sounders should still be strongly favored to pickup a win and start creating some distance in the playoff race.

Here's the APM from their scoreless draw with the Impact: 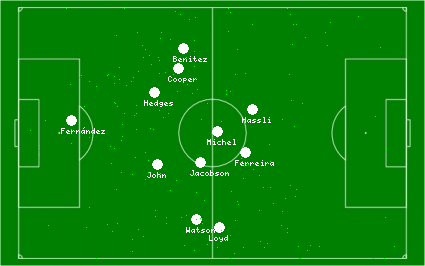 You can see that the odd attempt to turn Cooper into a left midfielder continue. And he was a tremendously defensive one with Ferreira and Hassli pushed forward. His average touch is further back than fullback Jair Benitez. That's not a look I expect to continue. With Ferreira playing forward, Michel is moved up from a defensive midfielder to a playmaking CAM. It basically looked like a really squashed diamond midfield with Andrew Jacobson at holding midfield. . a pretty significant departure from the 4-3-3 they were playing in their last trip to Seattle. They didn't concede any goals against Montreal, but they didn't score any either. So I'd say it had mixed results.

It'll be interesting to see if Hyndman tries it again in Seattle. Perez will replace Hassli, who's out with a suspension for some totally uncharacteristic (sarcasm font) violence, but that means less reliance on Hassli's crazy shots from distance and even more reliance on set pieces. Even with George John back, Seattle has the offensive ability to tear up the Dallas defense if Jacobson is the only player in front of the defensive line. And even more so if Cooper continues to be deployed as a side midfielder with defensive duties. So I'd expect Michel to sit back to help out, which would leave the two forwards on an island, much like Seattle's forwards have been this season. That would even more limit the Dallas chances to dead ball situations where Michel can be dangerous and ability in the air will be at a premium.

That's an argument for Zach Scott continuing his transformation to a central defender, and honestly he's played as well as anyone outside of Traore this year. His strength in the air may be necessary to ward off Perez and John in the box.

At the other end, Eddie Johnson is back from international duty, which re-unites the dangerous forward pair that killed Dallas in the last matchup. But it re-opens the question of what to do with Lamar Neagle. He pairs so well with Martins that it's hard to keep him off the field, even if you do it by pushing him to left wing, where he hasn't been nearly as effective this year. Still he's earned the opportunity to do it and prove it's just a sample size issue and he can still be an effective attacker on the wing. And Mauro Rosales on the other side has seen his play slowly improve along with the fortunes of the team. The last match against Chivas was arguably his best of the season, but let's be realistic. . it was against Chivas. Repeating that performance against a good (but still not great) team like Dallas would help put to bet the criticism of his play early in the season.

Which leaves the midfield of the defensive rock Alonso and Brad Evans, who at this point has to feel like he's just keeping the spot warm for Dempsey. He will no doubt want to prove that he still deserves a starting place in this side and a big game here would help.