The Crew are a mediocre team _with_ Frederico Higuain and Eddie Gaven. Without them, they're a target of opportunity for Seattle, even on the road.

Share All sharing options for: Crew Scouting Report: Leave Your Capos at Home

For the second game in a row, Seattle's opponent will be without a key player thanks to suspension. It's almost as if players would rather skip a match against the Sounders, and really, who could blame them? Last week it was the Timbers' Diego Chara taking a game off and this week it'll be Frederico Higuain — the heart of Columbus' attack. Other than Higuian, the only Crew player with more than two goals for the season is speedy right winger Dominic Oduro. And the only player other than Higuain with more than 2 assists is Eddie Gaven, who's out for the season with an ACL tear. 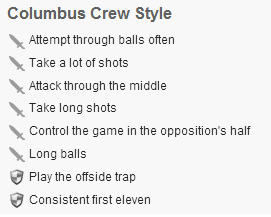 That leaves Oduro as the lone established offensive threat for Columbus, who likely will be content to try to counter through him under pressure from the talented Sounders offense. And with Leo Gonzalez having his best season as a Sounder since 2009 and the pacey Jhon Kennedy Hurtado and/or Djimi Traore available to provide help from the center, that's a threat Seattle should be able to handle comfortably, just as they handled the dangerous Darlington Nagbe last week.

Here's the average position map from their 4-0 dismantling at the hands of Real Salt Lake in Sandy last week: 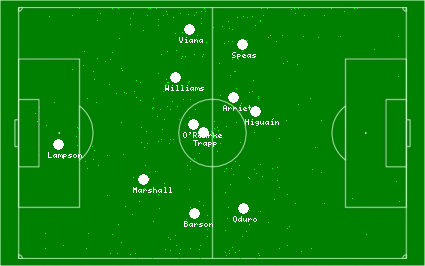 Swap out Speas for Justin Meram, who's likely back from his own injury, but that doesn't change the look much. It's a compact formation when they're under pressure (as they're like to be this weekend), with two holding midfielders behind the wingers and the attacking pair of Higuain and Jairo Arrieta. They play a high line to keep it compact, but as we saw against Dallas, Seattle's fast forwards and good passing out of the midfield can shred a high line and create breakaways behind the defense. And with Seattle struggling to find a consistent playmaker in the central attacking midfield, I'd expect the Crew to back off and allow some space to develop in front of their center backs, gambling that the Sounders can't do anything with that space.

Seattle will be once again without one of their high octane attacking triumvirate as Obafemi Martins remains out with an ankle injury. That defers the question of how to play all three together for yet another week (and beyond) as both Eddie Johnson and Clint Dempsey will be able to play as forwards. But the questions of what to do at left wing and at central midfield still don't have good answers. Lamar Neagle has been Dr Jeckyll and Mr Hyde this season, with impressive performances as a forward and very pedestrian performances as a winger. He had a particularly difficult game against Portland with little service and some bad giveaways, so I wouldn't be surprised to see him start this match on the bench. This would actually be a fantastic game for Steve Zakuani to abuse Chad Barson with Oduro bombing forward, but sadly that's not to be. So perhaps it's another match for a workmanlike game from Marc Burch to try to get some service into the Seattle forwards. Or perhaps the debut of Blair Gavin there? Either would let Seattle get away with reverting to a more defensive center with Brad Evans or Servando Carrasco alongside Osvaldo Alonso, if Evans isn't starting out right to spell Mauro Rosales.

Seattle has not been as good on the road this season as they've been in years past. And the past few months have been particularly unkind to MLS road teams. And the Crew have actually been decent at home, in front of a crowd that might be a little bit amped to have a go at Seattle after a somewhat weird controversy this week related to support at the upcoming USMNT game in Columbus. Those first couple of points are probably why the sim has Columbus 50/50 to win the match.

But I just don't see it. Higuain is a huge loss to a Crew team that's come to rely on him almost exclusively to create offensive chances. And Seattle seems to be rounding into form with Dempsey developing an understanding with the rest of the team. I'm not saying Seattle should be favored to win, but I'd say they should be strongly favored to get out of Columbus with at least a point. And this is the kind of game they need to win, even on the road, if they want to keep pace with Real Salt Lake in the Supporters Shield race.