Tomorrow's match in Toronto should be the debut of one of the biggest signings in league history, but Seattle shouldn't even need him to get a result against the Reds.

Toronto FC is not a good team, and that's not new. Without running the numbers, I'm pretty confident they've been the worst team over the 4 and a half years that Seattle's been in the league, with maybe only Chivas giving them a run for that title. They seem to be in a state of perpetual rebuilding, exacerbated by the fact that they continually place the foundation of the rebuild on semi-retired European players who get injured or quickly tire of losing (or the fans quickly tire of seeing them lose) and they leave and the process starts over again. In 2010 it was Mista, in 2011 Torsten Frings and Danny Koevermans. Mista and Frings are now retired. Koevermans missed nearly a year with an ACL injury. In 2012 they went younger with Darren O'Dea, but it didn't matter. He only lasted a year. This season it's Robert Earnshaw, who started off brightly but has played in only 2 of their last 7 matches. Then they were reportedly inches away from signing Diego Forlan, but given their track record he likely would have retired 3 months later, so maybe it's for the best that didn't work out. 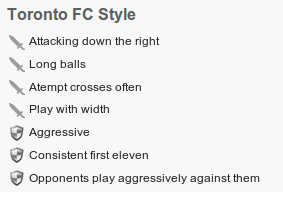 This weekend both Koevermans and Earnshaw are likely out again with injury, leaving them with a strikeforce of bench players Jeremy Brockie and Andrew Wiedeman. That stands in stark contrast to the Seattle Sounders, whose main problem in offense is finding a place to play for all of their forwards. In the absence of saying 'to hell with it' and going with a 4-2-4, it's likely the very capable Lamar Neagle will be left on the bench or be subbed early for new DP Clint Dempsey, who probably won't play the whole match after missing training this week with an illness. But the team will still start the game with two international quality strikers in Obafemi Martins and Eddie Johnson. And with Osvaldo Alonso fully healthy, Mauro Rosales rounding back into form, DeAndre Yedlin back from international duty, and the possibility of Shalrie Joseph and Michael Gspurning being available, we're starting to see the disgustingly talented team that Adrian Hanauer has assembled. It's true that the team hasn't won (or scored) in its last three road games, but that team wasn't this team. As the Emperor so wisely put it, I'm afraid the Sounders will be quite operational when your friends arrive.

Here's Toronto's APM from their 1-0 away win over New England last week: 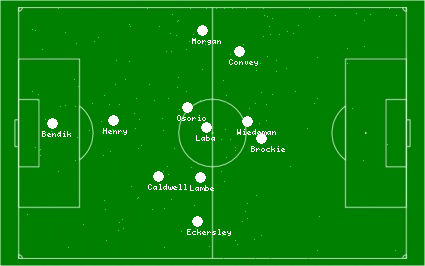 After getting a goal from defensive midfielder Matias Laba in the 2nd minute, they were happy to bunker up for 90 minutes and were incredibly fortunate the Revolution didn't at least equalize in a game in which Toronto was outshot 17-6. Toronto just doesn't have the defensive cohesion to stop chances, especially if the opposing offense can move the ball laterally to spread them out. I will be stunned if Seattle doesn't outshoot Toronto significantly, even on the road. And the ability of an attacking player in the center — whether that's Joseph or Dempsey or Brad Evans — to switch the ball across the box will be a key to getting the Toronto defense out of shape.

At the other end, Toronto's attack is likely to come through the flanks, via winger Bobby Convey on the left and fullback Richard Eckersley on the right. Neither are significantly dangerous on their own, but a defensive breakdown on a counter could allow the occasional opportunity. Assuming Alonso doesn't have an off day I wouldn't expect many chances to come through the middle. If Earnshaw does play, there's a little more threat, as he has the ability to make something out of nothing. But if the's their only dangerous attacker then double and triple teams to bottle him up will be the order of the day.

Really, on paper the talent and form differentials are daunting, even if Dempsey doesn't play the whole match. A team that has ambitions on the Shield and the Cup has no business losing to this Toronto team, even on the road. But soccer is soccer and weird things happen. Toronto beat Sporting Kansas City in March and Sporting is as well positioned as anyone to make a playoff run. The key to making sure it doesn't happen is overwhelming them. If only 5% of your shots are going in, take 30 shots. That's something this team can do, and if the defense is solid and doesn't get complacent, it should be more than enough.

Sounders at Toronto FC - Dawn of a New Era