Scouting Report: How Many Times You Get Back Up

We take our fourth shot at a top team in the West, hoping for a different result on home soil.

Share All sharing options for: Scouting Report: How Many Times You Get Back Up

Three times have the Seattle Sounders challenged the titans of the Western Conference this season, and three times have they been found wanting. First they faced Real Salt Lake, flush with excitement about new signing Obafemi Martins, but they were lifeless and disorganized and were crushed. So they went home to dress their wounds and re-find their focus, went on a six-game undefeated streak, and then challenged the Los Angeles Galaxy. Again they were not nearly good enough. They went home and called it an aberration and won two more in a row before once again trying Real Salt Lake in Sandy. And they lost again. So they went back to the drawing board, signed Clint Dempsey, and are ready to give it another shot.

The fact that Seattle's at or near (depending on how you count) the top of the Shield standings is a testament to how well you can do in the league by just taking care of business against the bad and the mediocre teams. But RSL and the Galaxy are their opponents in 3 of the last 8 games, so they have a slim hope of holding onto that Supporters Shield pace if they can't figure out how to beat them. And they have even less hope of an MLS Cup, since the playoff road almost certainly winds once again through Sandy, Utah and Carson, California.

Of course, one crucial difference about this week's match is that it's at home. A schedule that has us playing both of those teams twice on the road this season is particularly unkind, and it's meant its taken until the last quarter of the season to get a home game against one of them. And there's the small matter of having all three of Martins, Dempsey, and Eddie Johnson available.

But back to the Lakers. They've been one of the most consistent sides in the league for years, and in the past you could generally write a scouting report on autopilot. . blah blah diamond blah blah Beckerman blah Morales. . but they're changing it up a little more this season as they try to integrate a significant influx of new players. Here's their average position map from their 4-2 home win over Portland, which. . okay it's a diamond pivoting on Beckerman and Morales. Plus ça change. 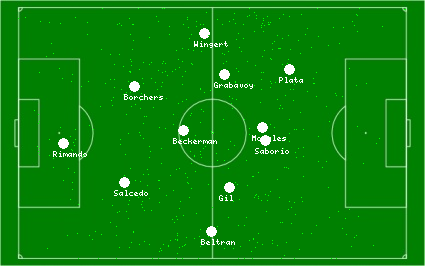 The only likely change from that lineup is Alvaro Saborio, who's probably out with a leg injury. That actually changes the attacking look quite a bit. Not only because Saborio is by far their best forward, but because he's the only consistent aerial threat at forward. Without him previously this season, RSL has gone to a forward pairing of Joao Plata and Robbie Findley, which is clearly all about keeping the ball on the ground and running fast. That in turn changes Seattle's math on defense. Zach Scott is a great defender against high crosses, but not against zippy forwards. So I'd expect to see Jhon Kennedy Hurtado and Djimi Traore in the center.

Against the central playmaking prowess of Javier Morales and late runs from Beckerman we deploy Osvaldo Alonso — though his dogged defending means you're going to see Morales going down like a sack of wheat 5-6 times as he tries to create dangerous free kick opportunities. That's another context in which Saborio's absence could make a big difference, leaving the set piece threat to the less threatening center backs.

If we can keep their fast forwards from getting behind and bottle up Morales' distribution, the last key is to shut down the fullbacks, who give the team its attacking width. That will require defensive help from Seattle's wingers and that's where we might run into problems. Sounders fans are understandably giddy at the prospect of a starting lineup that includes Dempsey and Martins and Johnson AND co-leading scorer Lamar Neagle AND assist maestro Mauro Rosales. But that's a defensively weak lineup. Rosales has the will, but the body isn't up to running up and down the sideline for 90 minutes. And Neagle's value has never been in his defense. Maybe we outscore them 4-3. And maybe we get unlucky in our shooting and lose 1-3. I think we're better off keeping the defense stout, and that might mean moving Neagle to a bench role, which would be totally unjust given his play this season, but that's what happens when you stockpile forward depth like Seattle has this year. 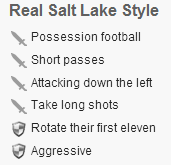 The question in Seattle's attack will be how to get their three amigos situated. The common assumption is that Martins and Johnson will be the forward pairing and Dempsey will drop into the hole as a scoring CAM. Personally, I'd rather Oba be the playmaker behind Dempsey, since I think he's a better service provider. But that's probably unlikely. And that means Seattle could once again struggle to get the ball to their forwards and, if Neagle starts, their left-wing-forward. That job would be entirely up to Rosales and I have no doubt Chris Wingert and Ned Grabavoy could contain Rosales if they made that their focus for the match.

Keep in mind that Seattle's only scored 5 goals in the last 4 games. Sure, they haven't been shut out. But they haven't exactly blown the doors off either — especially compared to Real Salt Lake, who've scored 15 in their last 4. FIFTEEN. On paper, Seattle has by far the better attackers. But I'm not sure they've figured out how to integrate into the rest of the team. And they need to do it in a hurry if we want to keep the Shield in sight. Fortunately, RSL has also allowed 2 or more goals in three of their last four games. So I wouldn't expect a low scoring match.