The build up on Lamar Neagle's goal was about as good as any you'll see in MLS this season.

Share All sharing options for: Six-pass sequence to set up Sounders' second goal was thing of beauty

The Seattle Sounders' surge to the top of the Supporters' Shield race has been mostly on the back of a defense that is now tied for the best in MLS. During their current five-game winning streak, they've allowed just one goal and over their past seven, they've registered seven shutouts.

While the defense was once again stellar on Friday against Real Salt Lake, we also got to see a glimpse of how good this offense can be. Both goals featured some impressive build up and there easily could have been three or four more goals with a little more luck.

The second goal really stood out, though. It featured six passes, one of which was a pass back to the goalkeeper (and wasn't part of the highlight package) and none of them were over-the-top. It was mostly well-executed but simple passes, aggressive dribbling and a quality finish. Here's a look at some of the key moments. Even including the back-pass, the entire build up takes about 19 seconds.

Alonso gets the ball in space

This is actually the third pass of the sequence but it's where it all starts to open up. Osvaldo Alonso is allowed to collect the ball in acres of space with absolutely no pressure.

This is probably what is really the fateful of the sequence, though. RSL midfielder Ned Grabavoy was already a bit out of position here, I'd argue, but he totally abandons DeAndre Yedlin. I'm not sure if he figured Chris Wingert was going to pick up Yedlin, but there seems to be little gained by him chasing the ball to pick up Obafemi Martins who is already being tracked by a couple defenders. This is also the first bit of very good recognition on the part of Yedlin, who aggressively moves into the space that has just opened up. 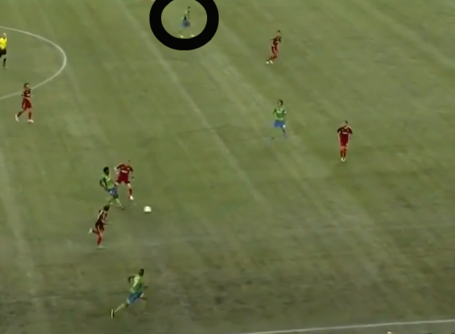 Obviously Martins makes the perfect read by spotting Yedlin's run (and Mauro Rosales may well have been point it out audibly), but this is also where the defense apparently forgets about Lamar Neagle. The Sounders' leading scorer is just hanging out on the off-ball side and rookie center back Carlos Salcedo doesn't seem to particularly mind. This is going to factor in later. 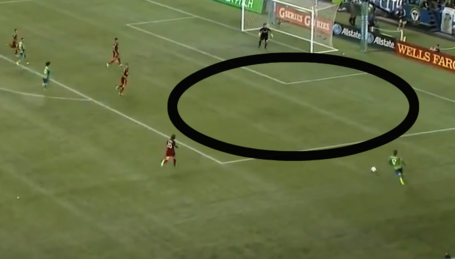 A few months ago -- maybe even a few games ago -- Yedlin probably hits his cross at this point. He's open, after all, after Wingert has been sucked inside, while Grabavoy is hopelessly trailing. Yedlin recognizes all of this, has rounded the corner and has a clear path to goal. He's also getting a little help from Rosales, who is waving him forward (although it's very hard to tell on this screen capture). Someday, perhaps, he'll grow confident enough to take it all the way in and try to roof the shot. For now, I'm more than happy to at least see him keep charging forward. 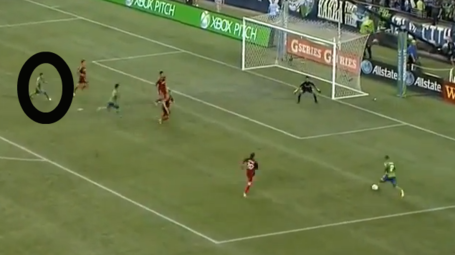 The instinct is often to get to the far post, while another runner heads toward the near post. But Neagle, probably sensing that no one has been paying attention to him for awhile at this point, cuts off his run and loops back around. It's a good decision, because three defenders are collapsing on the goal, which Yedlin apparently noticed. Although Yedlin said he didn't pick out Neagle, he obviously saw space opening up in that part of the field. 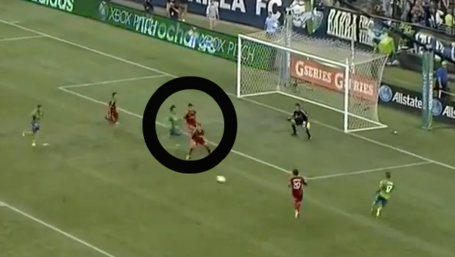 Rosales never touches the ball during this sequence, but his near-post run was the final piece the Sounders needed in order to finish off this chance as Wingert, Salcedo and Tony Beltran all seem much more interested in Rosales than they are in tracking Neagle, who know has an open look after from about 12 yards out.

Here's how the full sequence looks:

Absolutely gorgeous, which was lucky since the goal-celebration did not go off quite as smoothly: