The toughest game left on the schedule is also an opportunity for Seattle to put a stranglehold on the Supporters Shield race and demonstrate that they can beat anyone anywhere as they head into the playoffs.

Share All sharing options for: Scouting Report: Agents of S.H.I.E.L.D.

The Seattle Sounders have had a very good couple of months on the field. But up until last weekend, there was always that a little void of doubt. That Gollum messing with our happy Smeagol — reminding us that for all our victories against the middling morass of MLS teams, we still hadn't shown we could beat the two teams we would need to beat to conquer the MLS playoffs: RSL and the Galaxy. In every previous game against those two teams this season the Sounders looked second rate.

Well, along came the Sounders and 55,000 of their buddies and they shut that voice up. I mean, they stomped that voice into whimpering submission. It was a borderline war crime what they did to that voice. By the end of their fourth match against the LA/RSL bogeymen the Sounders players were basically doing the airplane celebration across the field during the run of play while the Lakers were whistling at the ref and asking him to put an end to it.

So with Real Salt Lake at home resolved, we step up the degree of difficulty to the two-time defending champions at their house. Realistically, a point here is a really good result. But if the Sounders actually get the three points, we're pretty much done, right? With the doubts and the caveats about too much rest for Borchers and not enough rest for Beckerman and the unsportingness of the crowd being loud and all. Three points here and the Sounders are inarguably the best team in the league. Not just in the standings (by both points and PPG) and getting one hand on the Supporters Shield, but in having no qualms about facing and beating any MLS team on any day in any venue. That's a level of confidence Seattle has never had entering the playoffs.

But. . uh. . like I said, a point is still a really good result. Those handy simulation results up above say there's a better than 50/50 chance LA gets a win, just based on form. The Galaxy have won 5 of their last 6 home matches (though it has to help that the exception was their last game, a 1-0 loss at home to Colordo). And Seattle has lost 4 of their last 6 on the road, though that's a set of games that stretches back to the bad old days of June and July.

Here's the average position map from their 3-0 win over the Earthquakes, which was the last home match that they had their superstars on the field: 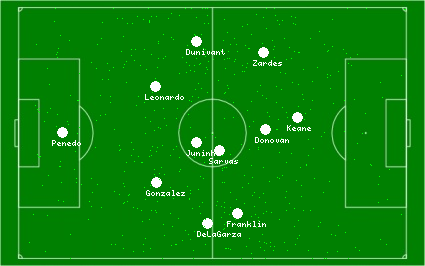 It took a while for Bruce Arena to sort out how the Galaxy would play in the post-Beckham era, but it looks like he's settled on a 4-2-3-1 with Landon Donovan hovering behind Robbie Keane. That makes them easily the most dangerous forward tandem in the league. Sure, any two of Clint Dempsey, Obafemi Martins, and Eddie Johnson is arguably as good in terms of pure talent. But Donovan and Keane aren't just potential. They've shown it, over and over. They're both individually dangerous and the excellent understanding they have of each others' tendencies magnifies that quality.

They sit in front of a pair of very good holding midfielders in Juninho and Marcelo Sarvas who are capable of dominating the defensive central midfield and pushing up to transition the attack to their two scorers. And they sit in front of Omar Gonzalez, who's one of the best central defenders in the league.

So the spine is strong. The relief for any team opposing them is that the flanks are not. On the wings and at fullback they're a very average team, with the only standout being Gyasi Zardes, who's an exciting young player, but like all exciting young players is unreliable. And with AJ DeLaGarza out, the fullbacks won't even make average. They'll probably move Sean Franklin back to right back, from where he was bounced to be one of the Galaxy's iffy wingers.

So I think they key to beating the Galaxy will be attacking the fullbacks, which is why this is one of the rare games where I wouldn't advocate playing Marc Burch on the left. Burch's skill is being defensively pretty stout on the left and lofting good crosses in. But with Gonzalez in defense, balls in the air aren't as useful and I'd rather we see someone who can go at Franklin. This would actually be an ideal game for Steve Zakuani to flash his speed, but in his absence Lamar Neagle is a good threat on the left. Or if they want to give Eddie Johnson a try there to actually get all of the hydra on the field at once, that works.

The other Galaxy weakness is balls on the ground. Omar has never been the most reliable defender when he has to move his feet quickly. . his boner against DC United last week — when Chris Pontius just picked the ball off his foot to walk into goal — being a stark example. That's an argument for keeping the crosses low, whatever Mauro Rosales' proclivities, and working the ball through the box to attackers in tight spaces. Fortunately, both Martins and Dempsey are tremendous in tight spaces, and a few inside runs from DeAndre Yedlin to feed them the ball in the box would give the Galaxy fits. 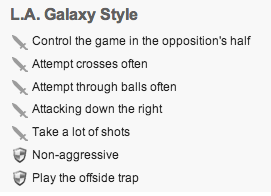 At the other end, Donovan and Keane's class are obviously the major threat, but it's worth highlighting how much the Galaxy attack relies on panicky defenses. Just watch a highlight reel of their goals. . defender makes a desperate slide, Keane cuts back and easily scores. Defender makes a desperate slide. Penalty. Defenders desperately collapse on Keane, pass to Donovan who's wide open. Goal. Keane, like Wondolowski, relies on drifting into open space to get good looks. To beat him, you need disciplined defense where everyone knows their responsibility and sticks to it, so he doesn't get those open spaces and we don't collapse into a mess of desperately sliding defenders. I can't say what that calls for in terms of personnel. I've always though of Ianni as a pretty disciplined guy. . maybe Zach Scott. You're certainly not going to keep Hurtado off the field with his recent form.

Finally, there's the question of what to do with the second central midfield spot. Late in the RSL game and in the postmatch press conference Sigi hinted he might be leaning to being a little zany with the lineup when everyone's available. For this game, I'd be happy to see our own 4-2-3-1 with Martins up top, EJ on the left, Dempsey behind, and Rosales on the right. Then the second midfield spot would be more of a holder, who could either be Brad Evans or the newly acquired Adam Moffatt. And honestly, a holding midfield of Osvaldo Alonso and Moffatt should give even Donovan a long pause.

But the more familiar lineup would be two forwards and two wingers.. Oba/EJ up top, Neagle on the left, and Rosales on the right. Then the second 'midfield' spot goes to a roaming Dempsey. And that's a good look on offense, but it leaves Alonso pretty alone to deal with the Galaxy attack. That's much more likely a 2-2 game than a shutout for anyone.

Another reason to go a little crazy is that we're basically playing with house money in this one. It's easily the hardest remaining game on the schedule. A loss here only dents the Supporters Shield hopes a little bit. A close loss, say by a goal, is basically holding par with reasonable expectations. But a win. . oh a win. Seattle would be overwhelming favorites for the Shield. And notice will have been served to the rest of the league.