The Middling of Marc Burch

Marc Burch is growing into his role as a rotational left midfielder on the Sounders.

Share All sharing options for: The Middling of Marc Burch

Marc Burch has come a long way with the Seattle Sounders. In 2012, he started 19 regular season games due to a mix of injury, unavailability, and form on the part of Leo Gonzalez. On several occasions, Sigi Schmidt inaugurated the double-LB look with a later substitution to protect a lead, and often Leo played the more advanced position. Gonzalez reclaimed the starting spot by the end of the season. Turn the clock to 2013, and a mix of health, availability, and form has limited Burch to two regular season starts at LB, both in March.

Burch debuted at left midfield in the 1-0 loss at San Jose on July 13th, most notable for the Sounders' loss of three players due to injury (Michael Gspurning, Brad Evans, Djimi Traore) by the 53rd minute compounding the forced absence of Obafemi Martins. Extenuating circumstances aside, it wasn't a promising beginning. Burch generated 1 key pass and launched 1 off target shot of his own; he completed 1 of 5 crosses, and a very weak 20/31 basic passes. 11 defensive actions (9 of them, recoveries) rated fairly well for the Sounders midfield, but his 18 lost possessions were not encouraging. However, with international absences and injuries influencing selection, Burch kept accumulating midfield minutes, and the huge win against Real Salt Lake on the 13th marked his 7th start in that position. How have things changed (and, indeed, have they?). 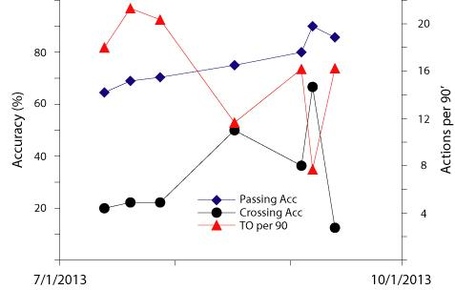 The concerns of sample size and a noisy graph notwithstanding - those who have praised Burch's recent efforts in midfield may be justified. His accuracy - both in crosses and in basic passes - has improved, and he has (correspondingly) turned the ball over less. In the seven starts, he's built up 3 assists (vs. 2 in his 21 Sounder starts at LB). Per 90 minutes, he generates shots (his own or others') about 2.17 times, better than Evans but weaker then Neagle in comparable roles. Where, exactly, does Burch fit in context with other LMs? 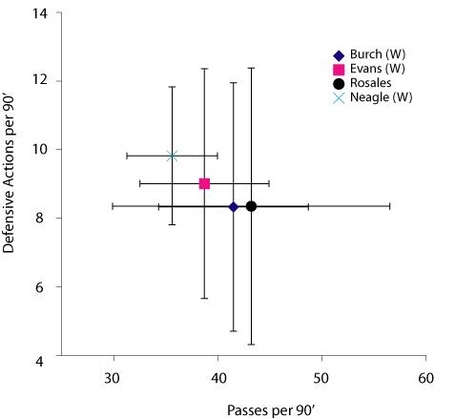 This graph is not fully updated for Mauro Rosales or Lamar Neagle just yet, but you can get a feel for Burch's role nonetheless. For one thing, he has not simply translated his play from LB into a midfield role (or, at least, hasn't since his first couple games). His defensive stats are roughly halved from his last 4 starts at fullback (17.5 per 90' to 8.3). His rate of play and involvement is remarkably similar to that of Rosales... and that is a trend to keep an eye on as Seattle picks out the XI on the field. Marc Burch has proven capable, in recent games, of delivering dangerous service from outside the box. He has the experience for solid defense, and has cleaned up his simple passing game to eliminate some dangerous turnovers. However, against high-pressure/possession opposing midfields (e.g. Houston), when the Sounders need two defensively-minded players in that space, he may not be the best choice.