The Supporters Shield race may come down to this game. If that isn't a reason to get up for a match, I don't know what is.

Soccer's a funny game. You can think you're going to win by controlling possession and dominating the run of play, and you actually win on an own goal off a corner kick. And similarly, building MLS rosters is a funny game. You can think you're sacrificing depth for talent in the starting lineup and building a team that sacrifices some regular season points to succeed in the playoffs, and then you actually get the deepest roster you've ever had and go out and win the Supporters Shield. That's the path we're on now, after thinking this would be a rebuilding year with the losses of Fredy Montero and Christian Tiffert and Adam Johansson.

If the Sounders are to win the Shield, this match against New York is critical. To whatever extent you give credence to the season probabilities we publish here or you find on Sports Club Stats (or that you roll yourself. . we know you do), you will know it's critical. I calculate that if the Sounders win, their chances of winning the Shield — their first ever piece of major MLS hardware, a guaranteed CCL spot, and a guaranteed home field advantage in every playoff round (including potentially the MLS Cup final) — will be 69%. That's a very good place to be. If they lose, on the other hand, it will be 15%. That's the difference between an overwhelming favorite and a longshot. If they draw, it's 35%. . still highest in the league, but it still means the odds are that someone other than Seattle lifts the Shield at season's end.

That's a 54 point swing between winning and losing. And for New York, it's just as wide — from 7% when losing to 63% when winning. That's why it's all the baffling that Thierry Henry — their best player — is refraining from playing this match, reportedly because he doesn't like the surface. Now, I'm not as talented a player as Henry. But if it meant a 50-point swing in likelihood of winning the Shield, I'd play on sand. I'd play underwater. There are players on the Sounders who'd play the game on broken glass. If I were a Red Bulls fan I would honestly be questioning whether the club could ever be great with a player that uninterested in such an important match. But then again, this is also the club that had a head coach who didn't even travel for a US Open Cup match, so maybe it's part of the culture.

Besides Henry, the Red Bulls will also be without Jamison Olave, who also doesn't like turf enough to even travel with the rest of his team. And without Bradley Wright-Phillips, who actually is injured. That means the Seattle lineup should be significantly more talented, even without Clint Dempsey, and surrounded by the massive CenturyLink crowd will have every advantage. The Supporters Shield will likely come down to whether the Sounders can convert that advantage into goals.

Here's their average position map from their home win over DC United about a month ago, which was the last time Henry didn't start for them. Conveiently, Olave also wasn't in the lineup that match, so it could be a decent hint at how they'll play. 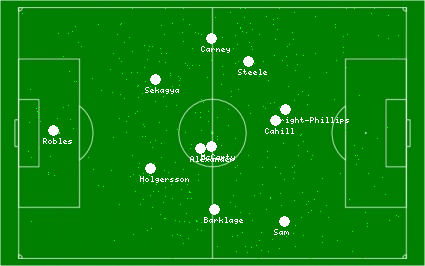 Swap Fabian Espindola in for Wright-Phillips, but otherwise that's the lineup we'd expect to see. The fact that this lineup needed a penalty save to beat the worst team in the league at home is certainly a heartening sign.

Without Henry, Johnny Steele will be the most dangerous conduit for their attack. He's become the team's biggest playmaker from his left wing position. And the most likely recipient of his distribution will be Tim Cahill's head. The Australian was already a legendary header of the ball in the Premier League and in MLS may be rivaled only by the current incarnation of Eddie Johnson. The Sounder center backs will have to be solid on aerial service to him. And then there's Espindola, who's just a dangerous player who can make a run from anywhere on the field. If Alonso can shut him down, Yedlin can keep Steele from getting too much space, and Hurtado and Traore can control Cahill, New York's offense should be neutralized.

At the other end, the Red Bull defense isn't particularly good even with Olave. And without him, they're bad. Even with two ostensible holding midfielders against DC United in Dax McCarty and Eric Alexander, the defensive center was wide open. Mostly because both players were easily sucked wide with lateral passes or were skittish about dropping into the box when under pressure. A team with a very good passer in the attacking central midfield would tear that defense apart. In that game, Dwayne DeRosario wasn't quite that player and they still nearly got the draw. Diego Valeri would kill them. Wait, let me check the schedule. . oh yeah, Valeri scored the first Timbers goal of the season against New York.

Unfortunately, Seattle doesn't really have that player when Mauro Rosales isn't pushing centrally. Assuming we don't play Shalrie Joseph (which I think would be incredibly unlikely), we're more likely to see Alonso and either Brad Evans or Adam Moffat in the middle. Neither of them are tremendous playmakers. So the best exploitation of that space may actually come from Obafemi Martins dropping back into the midfield. But overall I think it's a weakness we're just not well equipped to take advantage of.

Instead we'll take advantage of Olave's absence to flood the box with dangerous attacks. Even with Clint Dempsey likely out, Martins, Eddie Johnson, and Lamar Neagle can overwhelm a young player like Ibrahim Sekagya, who'll probably deputize at center back. Sometimes beating a team isn't about exploiting tactical weaknesses. It's about being better for 90 minutes. I think this will be one of those games. And barring some good fortune for the Red Bulls and/or a major letdown from the Sounders, we should win this game. And then be a few footsteps away from the Supporters Shield.