Missing starters will force the Sounders to make tactical adjustments for a set of important games. David Estrada and Marc Burch may play important roles in midfield and defense.

Injuries, absences and suspensions will once again test the depth of the Seattle Sounders, with particular concern over the next three games against Chivas USA, Chicago Fire and Real Salt Lake over a 9-day stretch. Under the 10% odds for the Supporters' Shield sidereal gave the team last Wednesday, Seattle must take advantage of two home games against weaker opponents in order to make a serious run at the top of the league. The game against RSL on the 13th offers a key opportunity to potentially slingshot to the top of the race. Who should we assume will be unavailable or limited, September 4th against Chivas? Mauro Rosales (rotation), Clint Dempsey (international), Eddie Johnson (international), Shalrie Joseph (injury), Brad Evans (injury), Leo Gonzalez (suspension), Obafemi Martins (injury).

I would guess that neither Joseph nor Evans will necessarily be available to play a key role against RSL, although there hasn’t been much news about the extent of Evans’ injury. Rosales’ peak use of 212 minutes in a 10-day period came back in March, and based upon his usage since then he’s unlikely to play significantly more than 150 cumulative minutes in the next three games. Based on the challenge and the importance of the match, I feel the majority of those should come in the game against RSL. With four clear starters out of the game, Wednesday may reveal a very strange lineup.

Some of the players who may be asked to step in against Chivas don’t have much of a track record to talk about (Eriq Zavaleta), but the statistics of some better-known players likely to play may tell us how the Sounders will adjust to the forced absences. 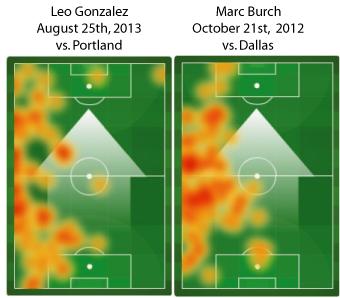 While Marc Burch has seen some reasonably effective minutes in midfield this season, he has started in place of Leo Gonzalez at left back only twice in MLS play, both times in March. If we compare his last 4 LB starts, extending back to last season, to Leo’s 4 starts in August (excluding the 7 minutes at Columbus before the red card)…

TackPM: Tackles per minute (both failed and successful)

The sample size is too small to make definitive judgments concerning player quality, but nevertheless there’s something to be learned about the pattern of play. The PassPM and DefActPM rate stats are designed to provide a simple metric of involvement in the offense and defense, respectively (ideally these would be normalized to overall team statistics, which I’ll try to do some time in the future). Burch gets forward and involved in the passing game to a greater degree than Leo. His long crosses into the box, even from the fullback position, could partially compensate for Rosales being limited in this game. Burch somewhat surprisingly matches Leo’s rate of accumulating defensive numbers, but exchanges tackles for clearances, for whatever they are worth.

Burch’s tendency to get forward and into the passing game as well as his relative weakness as a 1v1 defender suggests playing a fast/aggressive tackler (Hurtado, slightly favored, or Ianni) alongside to cover for Leo’s absence, and a defensively active midfielder. The anticipated CM pairing of Osvaldo Alonso and Servando Carrasco should also improve the team’s defensive range.

A somewhat unorthodox alternative I haven’t seen anyone suggest yet would be to play Djimi Traore at LB, and pair Hurtado/Ianni in the middle of the backline. This would allow Burch to slide forward into LM, but Traore isn’t an ideal fit for fullback in Sigi’s system, has neither practiced nor played there for the Sounders, and is returning from his own recent health issues. 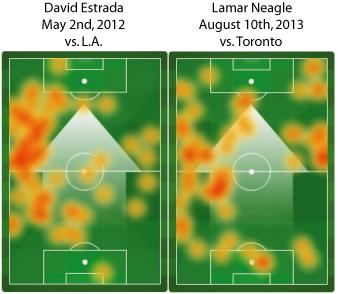 The headline is probably a false choice. I suspect both forward/midfielders will play significant minutes against Chivas and Chicago under the circumstances, but if Martins or Zavaleta pair with Neagle up top, roster depth may force Estrada out wide in midfield. Once again, you need to step back significantly into 2012 to find just 3 MLS starts for Estrada on the wing. How does his play there compare to Neagle’s?

I believe Neagle’s weaker traits in midfield this year have been taking on defenders 1v1 (doing it too often, rather than crossing) and losing the game on offense. Over this limited sample (picking the most recent 3 starts at LM), the numbers support the latter contention. In a 90-minute game Estrada will pass the ball about 13 more times than Neagle, and do so with greater accuracy. Part of the difference may likely be attributed to the aggressiveness of the passing. Neagle, as a midfielder, has still been expected to contribute the same offensive energy he’s put in at forward, but I believe that has taken him somewhat out of his game.

However, contrary to expectations, Neagle has brought some decent energy on defense when playing out wide. He may not be a fullback, as demonstrated in the Columbus game, and his offensive aggressiveness will take him out of position, but I feel this simple comparison reveals some reasonable ability to track back.

Having talked these options out:

Zavaleta and Rose enter as substitutes for Martins and Rosales, hopefully with the intention of defending a lead. This is my preferred solution to the Sounders’ absences, what’s yours?