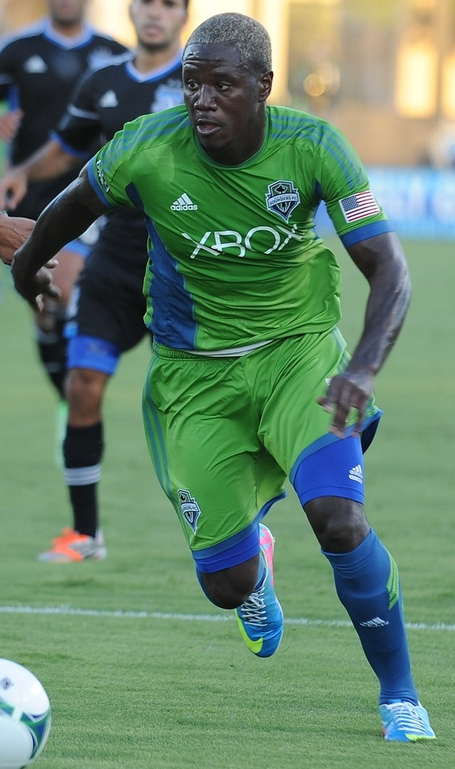 Greetings all! This is dc13 (happy to share my full name if I become a more regular poster). I know I'm a bit late to the game (Labor Day weekend will do that), but I'd like to throw my hat into the collective pool of potential future writers here at everyone's favorite SaH. My background is that I write content and manage websites and multimedia for a small non-profit here in downtown Seattle. I've been a supporter since I moved to Seattle back in 2008 and found out about this mysterious little team being put together to compete in MLS. I follow the Sounders daily, am typically very up-to-date on news, play in my free time (keeper, CB and target forward), have a good, but admittedly not excellent nose for tactics, am good at fact-checking and image permissions, and can easily tame my occasional cynicism about our ability to pass creatively when Mauro isn't on the pitch. I have also find myself disagreeing with primary content writers on occasion but am proud to say we've always disagreed respectfully and professionally, and I will always refuse to engage in personal-level attacks.

At minimum, this was fun to write and I hope you enjoy my thoughts regardless of whether I'm invited to post a bit more frequently. I wanted to offer a slightly longer-form post as this site doesn't regularly feature them and it might be something to consider more frequently (like once a week or every 2 weeks). I'm happy to provide a more news-oriented, shorter post if that is more what the SaH editors are looking for in the near future...

At this point in time the debate over whether EJ went over the top in his most recent goal-scoring celebration has, for the most part, subsided. One only need look at the explosions of comments both here and at mlssoccer.com to understand just how much it has already been discussed. Some of us were outraged at first and still remain that way today. Some of us were concerned about the impacts it would have on team chemistry, but were mostly abided by recent dismissals by Schmid and Hanauer. Some of us thought the entire thing was overblown to begin with and just simply wanted to talk about the game itself (ahem, Abbott).

Wherever you land on this reaction spectrum, there is no denying that this dialogue has opened a window into a bigger story that is very well worth discussing: How much is EJ worth?

To answer this fairly, we must look through two different lenses. First, there is the market-based determination. How much are EJ’s skills and production worth in a truly free market? To assess this we need to look at how much players are being paid for similar levels of production.

While he hasn’t scored as many goals in a single season as Wondolowski has, I see some adequate comparisons: both score lots of goals (including important ones), and both seem to have a ceiling somewhere in between great in MLS and average in slightly better leagues. Neither are going to Manchester United anytime soon. Wondolowski had a far different path toward achieving success on the field, however they are both in similar stages in their career, have proven the ability to succeed in MLS, and still have a few years left of likely production. EJ’s ability to score in different ways arguably offsets the disparity in goals scored by Wondo, further evidenced by Wondo’s recent struggles as his team around him fails to consistently put him into positions to score.

Most importantly, both were being woefully underpaid for their services. The Earthquakes saw this last season and subsequently locked Wondo up in a multi-year deal seeing him net around $600k per season. A look atop the current goals scored stats page shows that there is a mix of bigger name and better paid DPs (Di Viao, Keane, Blas Perez, Higuain) alongside some lesser-paid and typically younger emerging players (Camilo, McInerney, Fagundez). However, it is important to note that many of the players that fall under the latter are likely due for substantial raises, so it’s hard to compare them to EJ directly. It would also be unfair to compare him to a Keane or Henry as the name on their backs is arguably accounting for a healthy chunk of their salaries.

Thinking of Wondo as the best apples-to-almost-apples comparison and looking at who is scoring and who is getting paid in MLS, EJ at his age should likely being paid somewhere in the $500k-1m per year range. There is no reason to doubt that at 29, he still has at least 2-4 more solid seasons in him. Whatever concrete value you put on his services, almost all scenarios end up with him being paid at DP-levels barring the use of retention funds (which only can be used on players who have played 3 consecutive seasons with the same team). If EJ were traded or sold to another team, we should expect him to be making at least $500k/year in his new home.

Now is arguably the more difficult question to answer: How much is EJ worth to the Sounders. This question relies on a combination of on-field tactics and salary cap constraints.

Tactically, EJ has been a godsend to the Sounders since his first arrival. He was the target forward to partner with Montero that we had all been waiting years for. He found renaissance using his head and almost instantly found great chemistry with Mauro Rosales’ right foot. He broke the Sounders single-season goals record in his first try despite missing a few games early in the season. But this was also before we signed the likes of internationally-acclaimed players Obafemi Martins and Clint Dempsey. 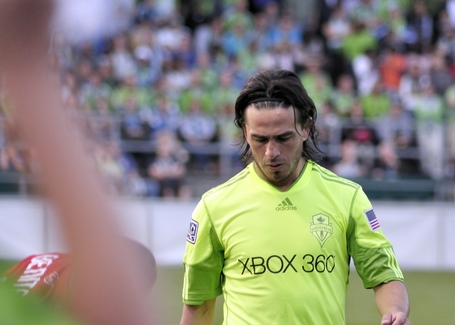 Unfortunately, we’ve still yet to see EJ, Martins, and Dempsey all line up on the field together. They could be the greatest three-headed monster in the history of MLS. They also could be the most overhyped trio of players in MLS, struggling to integrate their own individual skills and strengths into a cohesive team-based system successfully. Until we see this combination in consecutive games, we can only speculate.

But looking back before Clint was brought in, it became apparent that our forwards—aside from a couple games of anomalous finishing—were never our main issue. This team had a problem in consistently creating chances for our forwards from the midfield. Rosales was inconsistent, occasionally injured, and his service was waning (thankfully, this trend seems to have recently reversed). Martinez never really fit into our system the way we wanted. Joseph showed glimpses but almost predictably picked up yet another knock before going a full 90 minutes. If there was a bright spot, it was Brad Evans and his newfound ability to send through-balls to onrushing forwards (both on the ground and through the air), but even his most loyal supporters will admit he isn’t and will likely never be a traditional ‘playmaker’.

In essence, our team felt too divided between defense and offense. Aside from Evans, we didn’t seem to feature the types of two-way players capable of helping defensively while also springing our offense up the field and toward our dangerous finishers. Dempsey might still take a more prominent role in the midfield once we have our 3 attackers together, but there is a legitimate concern that by doing so we’d be playing him out of position and not best utilizing his strengths.

I am unsure as to whether an EJ trade or sale would net the Sounders significant allocation, but if it did that would have to be weighed into consideration. In a league with such a tight salary cap as MLS, even an extra $100-200k being available to round out your roster can have great effects. Although inconsistent and oft-maligned by our supporters, think of signing a Mario Martinez with this freed up cash. Not a horrible prospect in the slightest.

First, there is the possibility that one of the three take a more long-term role as a midfielder (Dempsey has been discussed as a high winger in 4-4-2 or as a CAM in a diamond) or that the team adopts a more formal 4-3-3 approach and lines up with more two-way players in the middle three. Should this happen, particularly if it pays early dividends, EJ would not appear to be excess talent or space.

Perhaps more importantly, however, EJ offers a particular skill that no one else on our team features at the same level. His ability to leap above a throng of defenders to place a perfect glancing redirect on target cannot and should not be undervalued.

While there are many ways to score goals, this particular asset could likely prove vital in a setting like the playoffs.

MLS is already considered a physical league, constantly featuring sloppy challenges, broken up plays, and often physical might over fancy finesse. Sure, there are teams like RSL and Portland that seem to go against this narrative, but appear more to be exceptions. This physical nature expands dramatically in the playoffs, where road teams tend to bunker aiming to bash out a 0-0 draw while frustrated home squads often divert to lobbing balls into the box and seeing what happens. Set pieces become even more important than they already were. Even teams that score with more finesse, like the Galaxy, tend to do so more out of physical defense and quick counters rather than steady, possession-based build up play.

Look no further than the amicable movement of Montero elsewhere as at least semi-tangible proof. For all he did for the Sounders throughout the years, it is widely believed that his inability to score in the playoffs at least played a part in the eventual decision to send him elsewhere. We’ll never know how much of a factor this played, but it’s not unlikely that the FO saw a need to get more physical in the box if we wanted to score more consistently in the playoffs.

Eddie Johnson does exactly this. He bangs, be bustles, and he goes Boom Boom in the box with regularity, often derived from his physical ability to elevate and change the trajectory of a ball using his head. Although the post-game narrative at Columbus was about his actions after scoring, the narrative could have been how a team that got outshot, outpossessed, out-just-about-everything still managed to put up a lone goal against the run of play and come away with 3 points on the road. In the playoffs, the ability to score against the run of play is often the difference between advancing and going home.

So therein lies the question: Is having 3 DP-level (and likely tagged if EJ gets his wish) forwards simply too imbalanced and focused at the top of the pitch? Are we better off replacing Rosales with a younger DP capable of similar offerings and doing our best to net allocation by moving EJ? Or is his golden head simply too valuable of an asset to give up, particularly given its use in playoffs, even if it means signing cheaper playmakers like Mario Martinez over pricier DPs like Valeri or Morales?

Or do we go another route and simply fill two DP slots and use the remaining cap space spread around on players like Evans, Hurtado, and a couple of new midfielders?

These are questions that aren’t easy to answer, and luckily they are ones left to smarter folks than you and I. In a game as fluid as soccer, there often aren’t "right" and "wrong" answers, just different ones depending on what you value.