Erick Torres is more machine than man, but even he shouldn't be able to carry Chivas USA to a victory over the cruising Sounders on home turf on Wednesday.

Share All sharing options for: Chivas Scouting Report: The First Law of Robotics

Last time Chivas USA came to town I called it the easiest game on the Sounders’ schedule this season, and I still think that’s true. Columbus without Higuain was arguably a worse team, but that was on the road and we tried to even things out by playing most of the match with 10 players. And the Chivas team returning this week is better than the version that visited in July, if only because they’ve figured out that their loanee forward Cubo Torres should be the focus of their attack. The Mexican youth international has scored 4 goals in their last 2 games and has 6 of their last 9. And just as importantly he’s moved the focus off of Chivas’ off-field turmoil and instability and back onto what they can do on the field.

But even with Torres, Chivas are a very bad team. Statistically, even weighted for their recent games where they’ve done alright, they are by far the worst team in the league and the worst team since I’ve been compiling the crunchy power rankings. Which is to say that if ever the Sounders were expected to take advantage of a game in hand, this is that game in hand in which to do it. A win would put Seattle at 1.72 PPG. Which would be. . the highest in the league. Beat the worst team in the league at home to put yourself on Supporters Shield pace. That seems like a pretty good incentive. 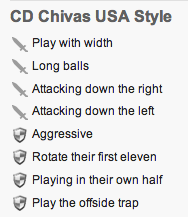 So Torres is the danger on offense. What about their defense? They’re not so much weak at any particular position on the field as they are weak at a position on the clock. Maybe it’s fitness, or maybe composure. But the Goats fade late in games. They fade badly. They’ve given up 15 goals in their last 8 games, which is pretty bad. But 12 of those goals have come in the second half of games. Twelve goals in 4 games worth of minutes is really bad. EIGHT of those goals have come in the 80th minute or later. That’s eight goals in about 90 minutes. I’m no tactical genius, but that seems really, really bad.

Our compatriot Matthew Hoffman from the Goat Parade has pointed out that new coach José Luis Real has mandated more intense pressing from the team, and while that strategy has certainly worked out well for Sporting KC (among others), it’s looking like the players don’t yet have the fitness to pull it off for 90 minutes. Especially after Chivas played a match just three days ago in Vancouver, Seattle would likely to do well to lurk a bit and hold off whatever early pressure they can bring and then run them over in the second half.

Here's the average position map from that late draw with the Whitecaps: 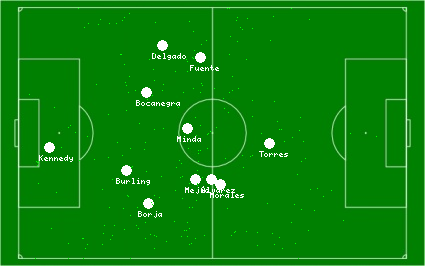 That mess on the right is indicative of a lot of positional fluidity for Mejia, Alvarez, and Morales, who switched back and forth between the wings. But there was definitely a rightward lean as the attacks largely came up the right flank to eventually cut in to get the ball to Torres.

Seattle’s rotation of forwards will continue as Eddie Johnson and Clint Dempsey are away on national team duty. The last time Chivas came to town was also the last time Obafemi Martins and Lamar Neagle started up top, and that’s a pairing that did well early in the season. If Martins is fit enough to start, that’s a likely partnership. Leo Gonzales is suspended for that red card against Columbus, which leaves left back to a likely Marc Burch. And Evans is out with a calf injury (and would be out with the US team if he wasn’t) and Shalrie Joseph is likewise out, as he so often is. So I’ll pencil in Servando Carrasco to pair with Osvaldo Alonso in the middle.

That leaves the wings and we’re going to have to dig pretty deep on the left side with Steve Zakuani still out. Alex Caskey is no longer on the injury report and could be an option. Or David Estrada. Another option — and one I’d actually favor — is to move Neagle back to left wing. There’s no question he’s played better as a forward this season, but long term with Seattle’s forward depth (assuming we can actually assemble them all at once) he’s probably going to see more time out left, probably in the playoffs. So the more time he can get there to make the adjustment the better, and Chivas isn’t a bad team to be making adjustments with. That would open up the second forward spot for Eriq Zavaleta, who’s been playing well enough in practice and reserves to be routinely making the bench for MLS matches.

On the right, there’s a good argument to manage Mauro Rosales’ minutes heading into the postseason. There’s also a good argument that we’re out of players to play there. Estrada is again an option.

This will be a ramshackle lineup. . no question. But at home against a tired (and seemingly perpetually tired) basement team, that’s not close to an excuse. A win is absolutely expected. And if other fans around the league got sick of hearing about points per game over the last few months, we’ll just have to see how they cope if we hit 1.72 and top of the PPG table.