The Fire kick off a road-heavy end of the season with a long trip to the Pacific Northwest, where we'll see if Seattle's reserve-heavy attack can keep holding the fort while we wait for the big guns to get back.

For the Chicago Fire, tonight's trip to Seattle marks the beginning of a difficult gauntlet they will have to navigate to realize their slim playoff hopes. They've played well since Mike Magee joined the team from the Galaxy in late May, with only 3 losses in the 15 matches since and only 1 loss in their last 7. Now only two points out of a playoff spot in the East, it would seem that they're destined to overtake Houston and New England to make the wild card round and put their nearly disastrous start to the season behind them.

But their schedule is daunting. Of their final 9 games, 6 are on the road. Road wins are always difficult in MLS, but this season in particular has seemed friendly to home teams. The usual recipe of road draws and home wins would get them 15 points to finish at 50, which will probably be right on the borderline of the playoffs. And that's with no losses, which is unlikely. So they'll probably need at least a couple of road wins to make it in.

This Seattle match will be the toughest on paper — despite Seattle missing two national team forwards. It's Chicago's only remaining trip to the West Coast and they'll be up against a streaking, talented team that hasn't given up a goal at home since July.

Here's the average position map from their home draw with Houston last week: 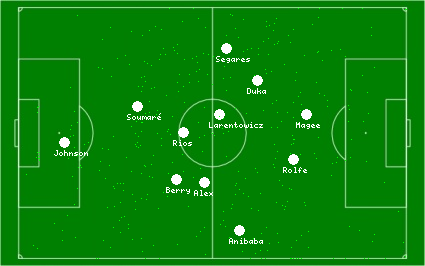 They rely on two good holding midfielders in Jeff Larentowicz and Egidio Rios to shield the back line while the wingers and fullbacks create on the flanks and draw defenses wide enough to create space for Magee and Chris Rolfe in the box. That tends to create open space in the central midfield for opponents to work in, but Seattle may be almost uniquely unqualified to take advantage of it. With Shalrie Joseph still out, I'd expect Osvaldo Alonso's partner in the middle to once again by Servando Carrasco. That matches up two defensive specialists on each team in the central midfield, so the creativity may have to come from players cutting in from the flanks or dropping down from the front line. For Chicago it'll be more of the latter as Rolfe and Magee drop into the hole. For Seattle, it'll probably be the former, as Mauro Rosales cuts in from the right wing to make plays, as he's done so well in the second half of the season.

It'll likely be defense on the flanks that determines whether Seattle can shut down the Fire attack. The return of Leo Gonzalez from suspension will make a big difference in that regard, and I think it's a good opportunity to return Marc Burch to his occasional left mid role, where he can pair with Leo to bottle up the right side of the Chicago offense. That means Lamar Neagle at forward, which has been a good role for him anyway. On the other side the Rosales, DeAndre Yedlin pair won't be quite as defensively stout, but if Alonso and Carrasco lean right a bit they can help shore up that side.

In the other direction, Seattle's attacking quality will depend a lot on whether Obafemi Martins is able to play. If not, the Neagle/David Estrada combo is perfectly capable of being dangerous — and frankly their movement and spacing in the last game made the offense look better at times than it did with our high priced strikers who tended to clog up in the same area of the field. But still, that makes a 1-0 victory more likely than a blowout. Seattle's certainly shown recently they're capable of 1-0 wins, but it'd be nice at some point to not have to hold on for dear life at the end of a match. And Chicago's defense isn't exactly stellar &dash; they haven't shut out an opponent on the road since a March scoreless draw with Sporting KC.

A Seattle win would move the Sounders ahead of the Galaxy into second in the standings setting up the chance to pass up Real Salt Lake with a head to head win next week, and then the Supporters Shield starts to look like a real possibility. But first thing's first: dumping some Seattle sunshine on the Fire's playoff hopes.