With Kovar and Okoli signed, what are their paths to further develop

This may be blasphemy in Soundersland, but not every Home Grown Player is going to be an All Star like DeAndre Yedlin in their first year. Some may need to develop. There are a few ways they can do that. None are guaranteed to succeed.

Share All sharing options for: With Kovar and Okoli signed, what are their paths to further develop

It is an amazing week for Aaron Kovar and Sean Okoli. They are no longer part of The Future. They are instead the present. Now with the First Team they will get the opportunity to earn a path to long term success. Every path is different and none ensure success. During training camp, just under two weeks away, fans will start to learn just what path these two HGPs are going to take. 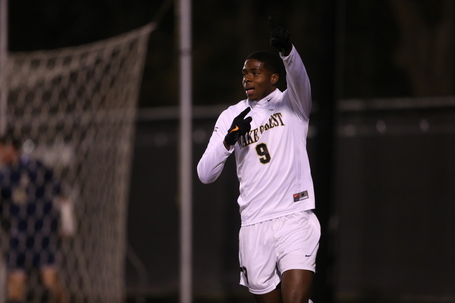 If they show they are in the top half of the depth chart early this gets them playing alongside the regular XI quite a bit. It gets them minutes in MLS games, likely at the end to start, but minutes none the less. More importantly in 11 v 11 drills it means sometimes being with the Ideal XI. That is huge. Particularly while Camp Cupcake and Dempsey's loan are things those that show they deserve time will get extended looks. This may be the least likely scenario, but the short and long term benefits are highest for the club and the players.

Develop Through Reserves and Open Cup

This is how most teams try to develop their youth. In 2013 there were 12 Reserve Games and 1 Open Cup match. And it those minutes were mainly given to the 2nd XI. Some of the deepest bench didn't get much time in their best spots even in these lower pressure matches. If this is the intent, the players still need to earn time. There will be something like 40 total players brought into camp at some point. Breaking into that 2nd XI is vital. FC Dallas is notorious for taking HGP signings and those signings not getting time before being cast aside. This is the most likely scenario and probably the reason that so many HGPs in MLS do not make it.

Loan Out To Lower Division

This takes a lot of trust. The young talents get loaned out to NASL or USL PRO sides. As Seattle has no affiliation agreement Kovar and Okoli could wind up at any pro club in the USA or Canada. Seattle's loaned players to Charleston, Atlanta, Orlando City and San Antonio. Some developed, some did not. In each case the Sounders FC FO had to trust a coach trying to win games at his level to play and train a youth talent in order to make them better for someone else. Loans can be as short as a single match or through the entire season; they can have recall agreements; their biggest impact can be Dom Dwyer. A reminder, a team must pick up the salary of a player for that player to not take up cap space or roster limitations within MLS. Most lower division sides can not afford this.

In the moment when I truly understand my enemy, understand him well enough to defeat him, then in that very moment I also love him. -Ender Wiggin

Loan Out To International Club

This is not tried much by MLS sides. It takes even more trust and a mature individual who is not only in their early pro career, but one able to be separated from their home culture for a significant length of time. It takes all the trust, if not more, of the Front Office, adds in a layer of cultural difference, and the problems that come up with any loan. It's a huge risk. But the payout could be enormous. For all the advancements in American soccer there are other cultures that are just more soccer-y than ours. Walking a young player up to the edge of the dock and throwing them in the big pool of a culture that breathes soccer will shock them.

They will either swim, float or need to be rescued. If they swim the payoff adds a layer of pre-thought that could really help them. If they float there is no harm and they experience a new culture. Pulling them back because of culture shock could mean that their career is ruined, or just that they need the comfort of the Sound around them. A reminder, a team must pick up the salary of a player for that player to not take up cap space or roster limitations within MLS. Many possible Liga MX, Costa Rican and Honduran sides can afford this.

Seattle, like a few MLS sides, dreams of a day when they are a power within CONCACAF. An international loan, or two, or more, may just be the way to find a way to love the soccer enemies below the border.

These are tough choices coming up for Sigi, Chris and Adrian. With no USL PRO team or affiliate in 2014 the options are a bit more difficult than what a few other teams are doing. These choices not only benefit the First Team they need to benefit the individuals as well. These are the youngest of men. They are Sounders from birth. Raised within the Rave Green (and earlier color schemes) they must be cherished.

There is not a right answer. As with all things about development it is both individual and philosophical. Both have to fit together to get the best for the player and the team. Each could follow a different path, one only need look to how Seattle Sounders FC developed drafted players to see the variety of paths taken.

Aaron and Sean/Ugo will take a new path soon. It will not be DeAndre's path. It will be their own. They must own it. Control it. Live it. "A beginning is a very delicate time."