Is there a way to objectively weigh a team's success in finding talent through the MLS Superdraft?

Grading the Major League Soccer Superdraft is extremely difficult, by any objective standard. In-game performance metrics are weak and rarely normalized for positional variance. The depth of starting quality players rarely extends beyond the 10th pick. Teams draft differently with respect to need and opportunity. Forming a qualitative opinion of drafting performance, therefore, tends to rely on carefully applied hindsight - weighing the choices a team made and which gems were missed along the way. However, while some teams may be particularly adept at identifying traits which may lead to players developing above the expectation of their draft position (e.g. Graham Zusi), focusing on star-level talent is cherry picking data (San Jose, for example, picked Michael Thomas before ultimately striking great value in Justin Morrow and Steven Beitashour). All MLS teams have draft hits and misses, and a great scouting department should exhibit better-than-average perception of talent on a regular basis, not just with the lucky strikes.

Let's assume that, even in the absence of good objective performance metrics, high-quality draftees will eventually receive a commensurate increase in playing time. Below, I've compiled regular season minutes for the first 38 picks of the SuperDraft over the past five seasons (2009-2013 drafts). 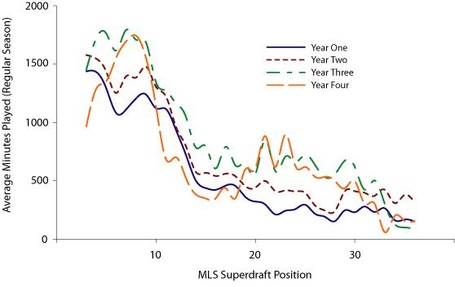 The lines represent a five-pick moving average of playing time (e.g. the y-value at x value 3 is the average minutes of draft positions 1-5). This gives us both a sense of the immediate impact and the development track of MLS draftees. As would be expected from anecdotal accounts, MLS regulars are mainly concentrated in the top 10 picks, and the average minutes played in those slots is somewhere between a regular starter and a rotational player. Role players may readily be found in picks 10-30, but reach significant levels of playing time for a few years. Surprise players are often offset by disappointments. In this range, 11 players from the '09 draft never played an MLS minute, and only 4 were regulars in 2013. Only 2 picks 11-30 never saw the first team from the 2010 draft, but only 3 could be considered "regulars" in 2013. After pick 30, finding value is exceptional, and it may be worthwhile to credit those clubs who have discovered such overlooked MLS talent, including those picks not covered in these stats.

Having gone through this exercise for the early rounds - what teams (if any) have regularly found players who overperform (or underperform) the trend above? We can measure minutes played for a particular draft pick against the 5 point moving average for the relevant years of play. For this analysis I have excluded the rookie season in an effort to control for playing opportunity (some teams not drafting for an immediate need, or scouting a talent that needs development) and also don't consider the 5th year (players move on, get injured, etc.). Therefore, the evaluated years:

In this table, a "hit" is defined as a player who exceeded the 5 point moving average by at least 100 minutes. "Performance" is, essentially, the average minutes played of all players chosen by a team compared to the moving average (for example, a player chosen by Columbus will spend about 360 fewer minutes a season on the field than an average player taken in the same spot). Despite the exclusion of the rookie season, this analysis may clearly be influenced by team performance, as a strong club will have fewer holes to fill and opportunities for a draft pick to see playing time. Team performance in the draft may be best evaluated by comparison with similar-quality teams, and I've included team points per game from 2010-2013. 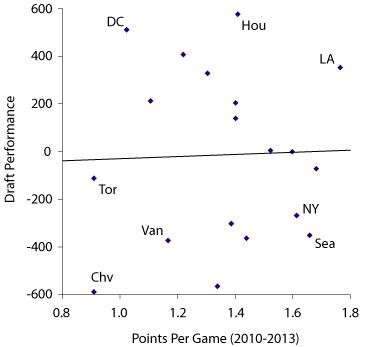 Some allowance is due for teams like Seattle and New York having fielded consistently strong squads, and therefore having few openings - but they nevertheless have fared more poorly in the draft than certain of their peers (KC, RSL) over the 4 year span. Some failings are outside team control - Steve Zakuani is a "miss" as a #1 pick thanks to Brian Mullan - but injury-related problems are common in the league, and even were we to arbitrarily upgrade Zakuani, Seattle would rank low. Los Angeles has clearly been strong in the draft. DC and Philadelphia may not have on-field success equal to their prowess in the draft, but teams like Vancouver and Chivas have largely squandered their opportunities to make a difference through this means of player acquisition (so far). Colorado is given no credit for its strong 2013 draft in this work, but certainly will see the benefits in the long run.

Playing time, for the reasons discussed above, is an imperfect measure of draft quality, but it can still give us some insight into team trends... and those trends tell us that, while finding value after the 10th pick is difficult, good scouts can do so on a regular basis.