This should be the last day for a bit that the roster is settled. With the MLS SuperDraft, Training Camp and the Transfer Window all rapidly approaching another wave of chance is about to come to Sounders FC.

One of the things that becomes rapidly clear is the Seattle Sounders FC is already much younger. The other thing that is clear is that there are significant holes in the middle of the midfield, and yet the club does not indicate they will fill those in the MLS SuperDraft. TopDrawerSoccer sees central midfield talent available, but also feels that Seattle will pass that up in the first round getting even younger at left back.

Here are some reminders about the Depth Chart

Top Section: Players are listed by primary role. This quick glance shows where Seattle has gaps in a First Team v Second Team situation. Quick eyes will notice that Kovar and Okoli are listed at the bottom of their respective roles. They certainly earned their contracts. They are now in the phase where they will need to earn their playing time. At this point they are just rookies climbing the ranks.

Middle Section: Players can fit more than one role. That's especially clear with how Evans, Neagle and Estrada have been used over the years. Bold is for players that are at or above MLS average as a starter in that role. Standard font is used for those who can fill in multiple games in that position without the club suffering significantly. Italics indicate that the player can fill in at the league level there, but mainly in emergency circumstances. 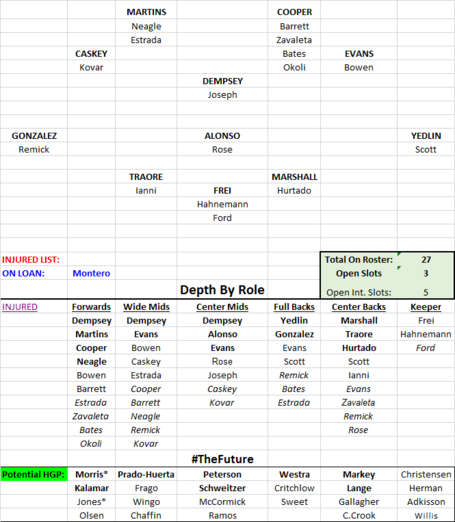 This is an attempt to see a depth chart as Sigi sees it at the current point in time. What makes that most clear is Zavaleta listed at forward. While most of the Sounder at Heart staff thinks that his maximum value is at centerback he's seen little time there in the past 10 months. The club also indicated that they were looking to draft a CB.

The wide midfield is another area where reading tea leaves is easier than figuring out Sigi Schmid's current state of mind. Part of this is because there are indications that the team will stick with the Diamond (though the dispersal of Forward/Midfielder/Defender may mean a 433 variant). The other part is that several of the forwards acquired during the offseason to this point always get mentioned as potential wide players. The Depth By Role for wide midfielders is the place that should see the most movement during the preseason.