The Care and Feeding of Kenny Cooper

Kenny Cooper, in the right position, has much to offer to the Sounders in 2014.

Share All sharing options for: The Care and Feeding of Kenny Cooper

Taken at its most extreme, the narrative that Kenny Cooper's 2012 performance should be credited to the influence of Thierry Henry is clearly flawed. Cooper's MLS track record with Dallas in 2008 and 2009 established a similar level of performance. Still, his time with New York could be considered an anomaly in other ways - 55% of his shots were on target (compared with a career average 49%) and a career-best 39% of those found the back of the net. Since returning to MLS from two lost years overseas, Cooper has one stellar and two weak seasons. If we are to guess at what Cooper will provide for the Sounders, we have to parse out how much of the variation in his performance is due to different team, different fortune, and different role. 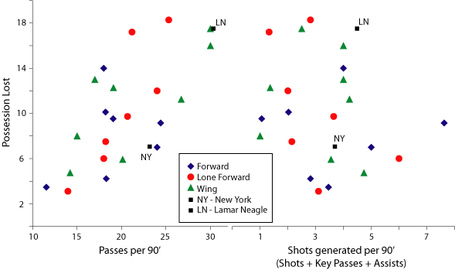 Cooper's time with FC Dallas in 2013 (individual games plotted above) falls into 3 basic categories: one of multiple forwards in a 4-4-2 or, more rarely, a 4-3-3; a lonely forward up top in a 4-2-3-1; a winger in a 4-2-3-1 or 4-4-2. Only appearances lasting 45 minutes or more are included, and I've done the best I can to characterize his role (subject to debate). For context, I've also plotted the average of his last 7 qualifying appearances with New York in 2012 as well as Lamar Neagle's average 2013 performance at forward (as of this post). Given the considerable scatter in the plots above, people may find his average performances in table form easier to read.

5 of Cooper's goals came in a multi-forward setup, and his 1 on the wing came on May 8th from a penalty kick. Dallas managed only 5 points in the 7 multi-forward games, largely due to defensive failures (17 goals allowed), which may explain why a team with Cooper, Blas Perez, and Eric Hassli used nominally single-forward formations so often. Setting the team's fortunes aside, Cooper rarely played in a role similar to the 4-4-2 typically used in his time at New York, and most often played at positions that magnify his weaknesses.

Cooper is not a distributor. Even when placed in a midfield role he registers relatively few passes for his time on the field. In the sample set, he connected on only 2 of 22 attempted crosses. Playing isolated at the top, his simple pass accuracy suffered. He was more turnover-prone as an isolated forward and as a midfielder. On the other hand, he is a goal scorer. When played in a similar fashion to his time at New York, he was still finding the back of the net in 2013 and his peripheral possession numbers dropped off only slightly (if at all, as it would be useful to summarize his full 2012 season rather than the last 7 games in which he and his team performed very well). Since his return to MLS, Cooper has scored 32 times in MLS play. 22 have come from the run of play (though I sometimes question OPTA's accuracy in this label), 4 directly from set piece service, 5 from the penalty spot, and 1 off a free kick (including 1 of only 2 coming from outside the penalty area). 10 have come from within or in immediate proximity to the six yard box. 22 have been scored off the foot, 7 off the head, and 3 off some other portion of the anatomy. He can score anywhere in the area using his right foot, and his left is dangerous in close to goal. He is not strong on the ball for his stature, but will use his size to his advantage competing for passes or loose balls. He is not particularly dangerous from range either as a supplier or as a scorer, and should not be put in a role to emphasize those chances.

If the Sounders use Cooper in a hold-up role, the best case scenario for 2014 is similar to what we remember of Nate Jaqua - offering some danger in the box and drawing defenders, but not always effective bringing others into the attack. If used strictly as a poacher, he may not reach the dizzying 0.65 G/90 rate he posted in New York, but 0.40-0.50 (roughly in the range of his MLS average) is readily attainable. The key for the Sounders will be to identify when the midfield and defense can accommodate him in that role.