Your dreams of tacos dancing on the CenturyLink pitch have been dashed as Friberg chooses Bologna instead.

On the second to last day of the winter transfer window, Serie A side Bologna F.C. 1909 have officially signed Swedish midfielder Erik Friberg, thus ending the hopes and dreams of benevolent, attractive, and humble fans of the Seattle Sounders. Bologna currently sit in 17th place out of 20 teams in the Serie A with 18 points in 21 games played, collecting a whopping -16 GD. They are tied with Catania in fewest wins with 3. Friberg will surely look to help out the club that has only scored 20 goals in their 21 games.

Friberg previously played in Seattle during the 2011 MLS season, where he scored 1 goal in 34 total games. Following the season, he requested a transfer to his native Sweden so that he and his girlfriend could have a baby around family. Sounders sold Friberg at a seemingly discounted rate to UCL side Malmö FF, where the midfielder made 61 appearances in two seasons. He remained a fan favorite after his departure due to his willingness to engage with Sounders fans and fellow Sounders players on Twitter.

It seemed like the potential acquisition of Erik Friberg made perfect sense, given Seattle's perch atop the allocation rankings and apparent lack of another midfield starter on the roster, but it's not to be.

With the MLS dropping a Pappa deadline of Friday at 1pm, it was known the Sounders would have to make a decision regarding their #1 spot in the Allocation Order, with the debate of Friberg vs Pappa being heavily weighed. However, Bologna has made that decision rather moot. And it would appear that now the Sounders must entertain offers for Pappa, pick the Guatemalan midfielder, or pass, which would put current #2 spot Toronto FC on the clock. sidereal had a great article detailing the potential options available for Seattle at the #1 spot.

Whatever happens in the coming days, it's clear that Erik Friberg will not be a Seattle Sounder for the 2014 MLS season. For the Swede it came down to Bologna or Tacos, and perhaps the decision to play in a league closer to Sweden was a determining factor. 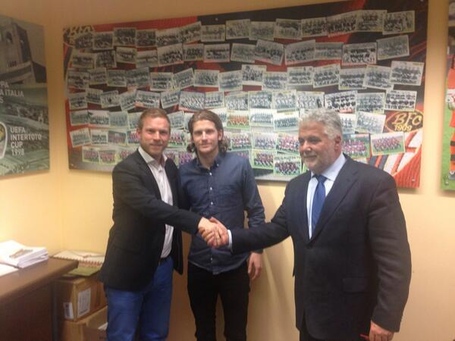