Sympathy for the Diamond

What's puzzling you is the nature of their game.

Share All sharing options for: Sympathy for the Diamond

Sounder at Heart does not lack for opinion concerning the diamond midfield.

"[RSL's] diamond 4-4-2 requires creative impetus from both the CAM and the CDM. Javier Morales is one of, if not the, best central attacking midfielders in MLS and he is aided by Beckerman and Grabavoy, who in their own right, are creative players, that allow RSL to flourish even in games where Morales is marked out. However, the Sounders in their diamond midfield formation had no answer to this issue."
-Ryan Cowper

"It's somewhat odd that Sounderland seems to have moved forward under the impression that the Sounders are now a diamond team, considering that the late-season tactical switch smacked of complete desperation, and could even be said to have been a total failure. What resulted from the new formation was a 5-1 aggregate deficit to our most hated rivals, before Sigi was forced to sub on more attacking players in an attempt to save face."
-malcontentjake

Also. in the most recent Nos Audietes, Aaron voiced concern over the acquisition of Kenny Cooper, as it seems to further lock Seattle into a diamond formation for which the team is ill-suited.

With all this opinion, I agree - more or less.

The switch to the diamond at the end of the season seemed a crude means of putting Clint Dempsey in the space on the field he traditionally has occupied, and to maximize his impact on the game. Even at the time, the personnel didn't match up with a traditional diamond, and Dempsey was not nearly the worst fit to the style (Adam Moffat, or perhaps Leo Gonzalez, take that label). Expressing sympathy if not outright advocacy for the formation, the patchwork nature and preliminary success of the Sounders' diamond leads me to quibble with Jake's "failure" description above. The team played a (somewhat) viable lineup in the diamond for all of 41 minutes before DeAndre Yedlin's injury against Colorado destroyed it. Every successive minute of the 2013 playoffs brought in another severe flaw to the system (Marc Burch/Moffat CM pairing, Zach Scott or Burch at fullback, Shalrie Joseph at forward). That 41-minute diamond lacked the creative spark Ryan would use to fix the formation, but that diamond was nevertheless successful, dominating midfield possession and generating multiple chances before Brad Evans finished off a deflected Gonzalez cross. 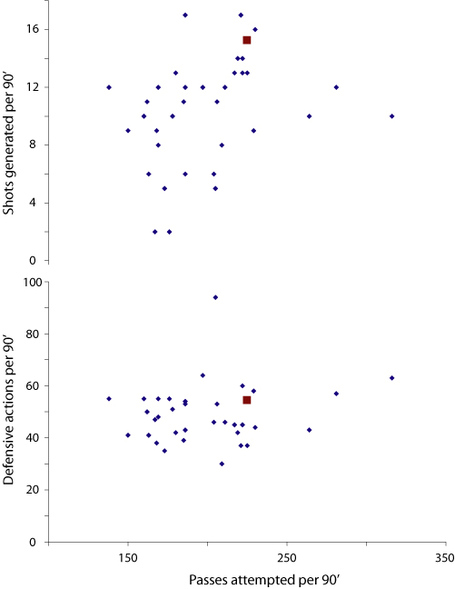 If you extrapolate the midfield performance from the first 41:14 (up to Yedlin's injury, marked in the red square; changes in Game State make this a questionable exercise) and place it in the context of Sounders regular-season games (marked in blue diamonds), the change in formation was quite successful in spite of the team's lack of familiarity with the system (and an extremely poor 0-for-5 on crosses). Shots generated from midfield (shots + assists + key passes), defensive actions, and pass volume all rate well above average (note: 2 of the 3 superior performances in shots were the Vancouver and Houston blowout losses, representing more desperation than success).

Adam Moffat was not a great fit for this offense, as he was neither as quick nor as accurate in his short passing as his midfield fellows. Still, his off-the ball movement and forward passing was sufficient to help the Sounders pick apart the Rapids quite effectively. The same thinking applies to Gonzalez, who cannot consistently provide width on the left side as an attacking fullback, but nevertheless played a key role in the game-winning goal.

Thinking of creativity as a means of unlocking defensive form, the Colorado victory had a bit more to do with executing a midfield passing scheme that prevented the Rapids' defense from taking shape. Clint Dempsey is an extremely effective short passer in the offensive half, and skillful at retaining possession in CAM space. Even in the absence of "creative" service, how many MLS teams are able to effectively mark Dempsey, Obafemi Martins, and Kenny Cooper in the vicinity of the box while limiting space for trailing midfielders and fullback runs? If quick, short forward passing and off-the-ball movement is the most pressing need of the Sounders' diamond, the team may have less demand for a Mario Martinez-type midfielder and more a demand for a mobile Shalrie Joseph, or for an Erik Friberg or Friberg-type box-to-box CM. Many of the ideas put forward to improve the formation seem to involve making up for Leo's lack of pace or Dempsey's lack of creativity, where both weaknesses are rather overstated. Improving upon Moffat's range and passing may be the shortest path to an effective lineup.

All of this discussion is not to dismiss the Sounders' need for more creativity out of the midfield. At the very least, the midfielder-to-be-named-later would ideally provide strong set-piece service (as that responsibility presently devolves upon Evans or Dempsey) and viable backups are needed for nearly every position, particularly given expected absences for international duty and injury. It may be too early to condemn the diamond based upon playoff performance, but I agree with the opinions stated at the top of this post, hoping that the Sounders are not tied into the formation (I, myself, would prefer a truer 4-3-3 or perhaps a 4-1-2-3 depending upon whom the team acquires in the remainder of the offseason). Seattle does not presently have a convincing roster for any option (4-2-4 notwithstanding) and some offer worse fits than Dempsey as a diamond CAM (Cooper anywhere in a 4-2-3-1, for example). This team is incomplete, and we will have to wait to see the finished product.

No matter the ultimate design of the 2014 Sounders, the example of the 2013 playoffs should illustrate the risk of forcing personnel into mismatched roles, in the diamond midfield or otherwise.