There were some definite highs and lows in August, but two big Open Cup and Cascadia Cup victories left us with mostly positive memories.

Share All sharing options for: 2014 Year in Review: August

When August rolled around, fans still had the bitter taste of a 3-0 home loss to L.A. in our mouths. Things didn’t improve immediately, either. The San Jose Earthquakes had our number twice this month, defeating the Sounders on the road at the start of August and drawing at home in the middle of the month.

However, August was not full of doom-and-gloom. A thrilling Open Cup victory, the return of our World Cup heroes, an exciting Cascadia match, dominating Seattle Reign FC performances, and endless days of Seattle sunshine gave us plenty of positive August memories.

Let’s take a look at the highs and lows of August.

The Sounders took on the San Jose Earthquakes for the first-ever sporting event at Levi’s Stadium. Chris Wondolowski had a big World Cup miss a few weeks prior, but he managed a perfect pass to Yannick Djalo in space in the 42nd minute, who slipped a shot past Stefan Frei for the game-winning goal. Seattle’s best chance came in the 85th, when Chad Barrett’s header was cleared off the line by, again, Wondolowski. Of course. 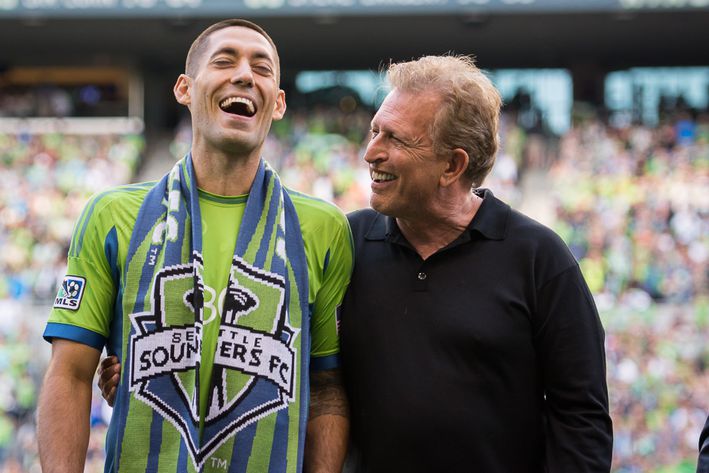 On August 3, 2013, Clint Dempsey became a Sounder. The Sounders celebrated his Deuce-versary by taking a look at Clint’s best moments in Rave Green over the last year. Luckily, we had a lot.

It wasn’t pretty, but it was a win. A deflection in the 70th minute, followed by a Gonzalo Pineda PK in the 74th, secured a home victory against the Dynamo. Two match takeaways: Stefan Frei was improving (he earned Man of the Match), and Chad Marshall can’t get hurt. EVER. His return brought immediate order to a backline that looked confused, disorganized, and slow over the last two games.

Also, according to Ethan’s Aftermatch Aftermath, we can blame him for the previous two losses. Why #BlameEthan didn’t trend on Twitter is beyond me.

What’s the best way to get out of a scoring rut? Score a ton of goals, of course. That’s exactly what the Sounders did in their U.S. Open Cup semifinal match against the Chicago Fire. The Sounders enjoyed a 6-0 victory at Starfire thanks to a goal in the 6th minute from Chad Barrett, a pair of goals from Andy Rose and Kenny Cooper, and another from Obafemi Martins just five minutes after entering the match.

On August 13, DeAndre Yedlin’s transfer to Tottenham Hotspur was made official. Come January, a few more Seattle fans will be cheering, "Come on, you Spurs." Take a look at DeAndre Yedlin, by the numbers. And share your favorite Yedlin hairstyle in the comments.

Remember that time the tiniest player on the field scored off a header? So do I. With Marco Pappa and Obafemi Martins sidelined—Pappa due to injury and Martins a red-card suspension—the Sounders struggled to find the back of the net, losing 2-1 to RSL on the road. The loss put RSL at the top of the conference (with a game in hand) for a fleeting moment. It wasn’t officially time to panic, but the Sounders continued to struggle against high defensive lines.

The Sounders statistically dominated this home match against the Earthquakes—outshooting San Jose 24 to 10—but a Wondolowski equalizer in the 65th minute stole two points from our boys. However, one point was enough to push the Sounders back to the top of the conference and Supporters’ Shield race.

While the game was frustrating, Yedlin did give us this fun play:

The month was drawing to a close, and 2013's fall meltdown was in the back of every fan's mind. The Sounders needed a dominating performance to convincingly emerge from their recent slump. On August 24, fans got that performance—against our Cascadia rivals down south, nonetheless. Chad Barrett celebrated his third goal in three straight MLS games with a ballerina twirl. The hydra was back. The Shield was still in our sights. All was right in the world.

The match included this 80-yard run from Dempsey:

And this I-still-don't-understand-how-he-scored-this wondergoal from Oba:

Clint Dempsey’s shin was the difference-maker in this 1-0 win against a depleted Colorado Rapids team that included a real-life sheriff, Joe Nasco, in goal.

After a dominating season that included winning the NWSL Shield by 13 points, Coach of the Year honors for Laura Harvey, and an MVP award for Kim Little, the Seattle Reign FC entered the playoffs. Goals from Kim Little and Megan Rapinoe helped them defeat the Washington Spirit 2-1—propelling the Reign to the NWSL final at Starfire Stadium. The combination of Lauren Holiday and former Reign FC forward Amy Rodriguez proved too much for the Reign, and they lost 2-1 to FC Kansas City on August 31.

Goal of the Month

It’s a Sounder at Heart Moment of the Year finalist, so this O-BEAST-MODE goal has to be Goal of the Month for August.

Quote of the Month

I think every player aspires to challenge themselves against the very best and that’s what I’m hoping to do.

DeAndre Yedlin on his move to Tottenham Hotspur.