3XI Depth Chart - Use of Time

After a few matches we can get a better idea of how certain players are viewed by the coaching staff. This look at the Depth Chart includes a look at trialists as well as which players on the roster look to be charging into the 18 from the fringes.

Share All sharing options for: 3XI Depth Chart - Use of Time

Things are starting to sort out a little bit. The search for the magical trialist continues, but the bubbles of XI and 18 are also starting to get a bit clearer as well. In this edition of the 3XI Depth Chart there are a few changes. On the practical side a legend is added to the graphic.

But the movement of players is what is truly important. Sigi Schmid took a long look at some trialists, played several of the various bubble players in unique situations and we can start to learn how those three empty slots are going to be used.

Tactically Seattle Sounders FC used both a the empty bucket 4-4-2 and the diamond during the preseason. One of the discoveries from that usage is Alex Caskey as a central midfielder. While more often used as a wide player in previous seasons a majority of his time this preseason is as the more advanced central mid. His approach is obviously different than Clint's approach. He showed quicker passing and could fill in without damaging the club's chances at victory.

Sean Okoli is primarily a forward. Every single minute he played was as a wide man, but he played the role like a goal dangerous forward. Of the three youngsters competing for time up top he's shown the best footwork, passing and hold-up play.

If Tristan Bowen were a draftee rather than a five-year vet fans would be stoked for his addition to the team. He drops back well, though foul prone. After turnovers he immediately looks to either attack or defend the goal as appropriate. He is not in the Ideal XI, but when he plays he will be helping the club earn points not hurting it.

With Leo Gonzalez out injured the depth at left back was tested. Dylan Remick more than passed that test. He took that test and earned entry to the Ivy League. He's more than just speed. His defense looks strong and his crossing quite good. No player showed a greater improvement this offseason than Remick. There is no third natural left back. Aaron Kovar found himself playing there in order to get time. With 70% of his minutes in a new role he showed that he can learn, adapt and apply his skills in unfamiliar places. He also had the best service of any of the Sounders in Tucson.

Jeremiah just wrote about Andy Rose. Then Andy Rose looked even better. Rose could very well be out of the sophomore slump and into "you should play me coach."

Obafemi Martins is not going to move up the depth chart. He's basically at the top. He looks great in his role as the higher forward. 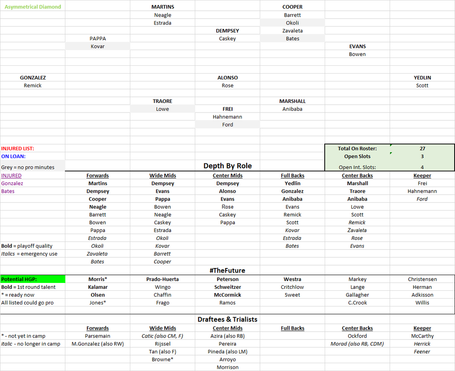 Let's take a deeper look at the Trialists and their playing time. Several cuts are starting to be known. Both Morad and Catic are no longer with the club. This is a great time to point out that playing time in preseason matches can mean two things. First, it could mean that Sigi likes what he sees and is trying to get the player more experience in Rave Green. Second, it could mean that Sigi thinks that they are on the bubble and needs more time to evaluate them. Azira looks to be that first section and Morad the second.

The breakouts are clear. Kevin Parsemain scored twice. His touch is soft; he's goal dangerous; he captures dangerous spaces. At this point it seems quite likely that Seattle signs him as their ninth natural forward. Micheal Azira also looks quite good. The former Battery player is showing strong role flexibility, good positioning and is a hard tackler.

Most of the rest have shown why they are trialists. There is a weakness that is just a bit too much to make up for their strengths. Some are doing too much by themselves (M.Gonzalez); others a bit too patient in their play (Catic). While some may still be in camp their fight for playing time and a chance is getting tighter. Which of them can earn a trip to Charleston will be a theme of the next week.

Analyzing Pineda and Arroyo is difficult due to their lack of playing time.