Do you believe in magic?

Though they might try to hide amongst mere mortals, it would appear as if the Sounders employ wizards.

Share All sharing options for: Do you believe in magic?

Since the Sounders’ inclusion into MLS, they have perennially been one of the better teams, winning three US Open Cups and making the playoffs in each season, albeit with varying degrees of disappointment included therein.

In that time they have accumulated some truly talented players – world class players who have performed in top tier leagues who now wear the Rave Green. But it would be naïve to think the Sounders’ talent lay only with international stars, as the Sounders have been effective at developing talent into players worthy of their respective national teams.

There could be myriad reasons why Seattle has been able to attract and develop so many talented players in their short MLS history. It could be the rain, the fervor of the fanbase, or maybe something less substantial like money. Or it could be magic.

And now the Sounders have been heavily linked with Drogba – even rumors of a contract being offered – with details being leaked (thanks, Turkey!). It certainly seems like magic.

It begs the question whether Seattle Sounders General Manager Adrian Hanauer is a wizard, and if he sets his sight on acquiring fellow wizards.

A warning to all the single ladies out there, skip the next paragraph, if you would be so kind.

I’ve played enough Dungeons & Dragons in my day to know that being a wizard is pretty much the best way to go. Why would I want to pick up a sword and go toe-to-toe with the Big Bad Evil Guy in hopes to get the McGuffin and Save the Cheerleader when I could just make my big stupid fighter even bigger and stupider and he can go toe-to-toe whilst I lounge in a chair and sip on fruity cocktails?

The thing about being a wizard, as Adrian Hanauer most surely knows, is that you have a lot of power, a lot of magical power, and you don’t just use that power to pull the moon closer to your balcony so that when your girlfriend sees it she gets all sexcited, you use it to make your job easier and to make those around you better.

I want you to do something right now. I want you to build a time-machine and go back to a previous version of yourself. If you want to do the whole Biff-Sports-Almanac thing, be my guest, but you’d better believe I’ll be wanting a cut of that fat cash. But I want you to go back to Past-You and after that Past-You makes a snotty remark about how fat and old you look, I want you to ask that younger version if it was possible that Seattle would have a professional soccer team full of wizards like Clint Dempsey, Obafemi Martins, or even Didier Drogba. If it’ll help your narrative you can even mention Freddie Ljungberg and Kasey Keller.

Be careful though, Past-You might freak out and punch you and you don’t want one of those Time Cop mixer parties happening.

What will happen is Past-You will say no, no way that an American team can draw talent like that. Spoiler Alert: they have! And wizard Hanauer keeps pulling more wizards out of his hat.

Do you remember when Hanauer signed Dempsey out of nowhere? "What is this new devilry?" bemoaned all other MLS muggles. "Wizards rule! Non-wizards drool!" We shouted back.

After initially being rebuffed by Levante over Obafemi Martins, a few precise gestures from Hanauer got that deal worked out. Just standard wizard stuff, that’s all.

Seriously, look at all this magic.

Clint "It’s not a trick. It’s an illusion!" Dempsey

The Best of Clint Dempsey (via 15checkthisout9) 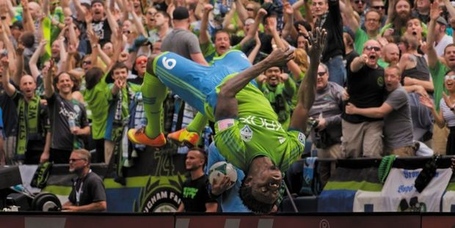 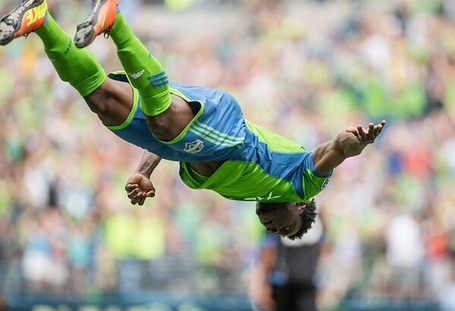 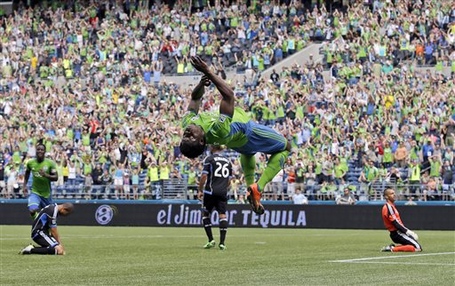 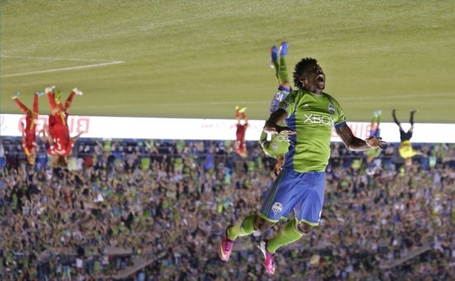 Didier "Are you watching closely?" Drogba

That's some straight up wizard shit, that there is.

Some of you might be asking the question, "If Hanauer is a wizard and has been employing wizards, why haven’t the Sounders won the MLS Cup?" Well, that’s a fair question, I guess, if you’re unfamiliar with the Three-Act-Structure.

Wizards are all about flair. They’re the dudes who don’t look back when the big explosion occurs. You have to be knocked down before you pick yourself back up. That way when you’re the only one standing at the end, when the Cheerleader survived, the McGuffin deactivated, and the BBEG smote into ruin, you’ll truly savor that taste of victory. It’s a wizard thing.