A guess at how the Reign roster could line up in the season opener, and a comparison to the team that lined up on opening day last season.

With the Reign's frenetic, transformative offseason coming to a close, it's a good time to look at the new roster and project a likely lineup. Nineteen of the available twenty roster spots are filled, and thanks to Laura Harvey's relentless work since the end of last season, only nine of the current players were on the team in 2013.

In predicting an opening day starting lineup, I'm going to assume Harvey sticks with the 4-3-3 she played last season and in previous years with Arsenal. Anything else seems very unlikely for a host of reasons — it's the incumbent formation, it best suits the personnel on the team, Kim Little has been imported to presumably run the same formation she flourished in with the Gunners, etc. So let's assume that.

One complication is the fact that there's a lot of positional flexibility on the team, especially in the attacking midfield. Most of the wingers are just as able forwards and vice versa, many of the central midfielders are interchangeable, etc. Last season we saw Kiersten Dallstream play fullback and winger, Lauren Barnes play across the backline, Jess Fishlock play every position on the field in front of the defense, etc. So I might project a player to be a backup on the wing without being shocked at all if she ends up in the central attack or forward. That said, I'm pretty confident in the starting lineup at least.

So with that said, here's how I'd expect the team to line up with the current personnel. For each position, I'll predict a starter and the first backup on the depth chart and then compare that with the player that started at that position in the season opener last season and the usual 2013 starter at the position (if different). I think that'll highlight how much the roster has improved in the offseason. 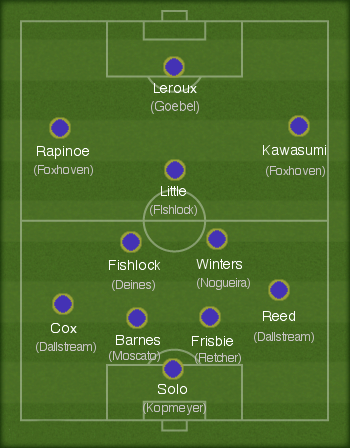 Solo missed the first half of last season with a wrist injury — one of three US allocated players who weren't with the team to start the season. Betos did an okay job filling in, but Solo is one of the top 3 goalkeepers in the world. Having her for the full season is a clear upgrade at the position.

Kopmeyer started last season third on the depth chart, but she had one start during Solo's absence. She was let go during the season after the US #1 returned but stayed close to the organization. Her familiarity with the team will help, but obviously anyone is a big downgrade from Solo.

This is where Seattle really suffered last season. After Deines was injured early on and Zurrer was glued to the bench for most of the season, Seattle rotated through a misfit collection of center backs, most of them playing out of position. Harvey eventually settled on fullback Barnes and midfielder Kyle. Over time, Barnes flourished in the role, going on to win our Defensive Player of the Year. Kyle gamely tried to learn the position on the go, but was never really comfortable in it.

This season Barnes returns from a solid campaign in Australia, where she helped Melbourne win the title (scoring the second goal in the final on a nice volley). I'd expect her to have an inside track on a starting spot. And for the other, I'd give the nod to draftee Frisbie, who was a Hermann Trophy finalist in her first season at center back for the Portland Pilots and was just called up to the US U23 team.

The depth at the position is good this year in stark contrast to last season, and I wouldn't be surprised to see the veteran Fletcher — who's also coming in from a season starting down under — win a starting spot. Or Canadian international defender Moscato. And Deines is in the conversation as well.

Reed was a solid right back last season, but she missed the opener with an injury and Mexican international Ruiz filled in. Dallstream was the left back for most of the season before Cox returned from having a child and promptly became a regular US national team starter again. That gives the team a very reliable fullback pair this season, though the depth is a question mark with no clear succession after Dallstream. It's likely Harvey would take advantage of the sudden depth at center back to move Barnes or Fletcher to the outside.

Verdict: Full season of Cox should be an upgrade.

This was the strength of the team last season, and it's not getting any weaker. As mentioned, Fishlock was everywhere in the midfield as the team's rare bright spot in the early season. And it's possible she played as much at CAM and forward as she did at holding mid. I think her ferocity and ball-winning ability (along with a notable player acquisition) put her firmly in the defensive midfield pair when everyone's available, but with international absences and whatever injuries come up, she could drift around the attack again. Winters is a solid holding mid who's been around the fringe of the senior national team for years.

Despite the quality of the likely starters, we shouldn't overlook Nogueira, who played a full season running the central midfield for Boston before coming over in the offseason for draft picks. And Deines — who's adaptable but has the misfortune of playing the two deepest positions on the team — will probably get minutes here, too.

Any other year, the addition of the 2013 PFA Women's Player of the Year, who's the offensive engine for a perennial championship contender, would be the signing of the offseason. The fact that Little might only make the top 3 is a testament to how crazy the winter has been. But I wouldn't be surprised at all if she has the biggest impact. Harvey's 4-3-3 is built to run around a player that the team almost never had last season. Fishlock was a good central attacker when she played there, but she was busy running around plugging leaks at holding mid and occasionally at lone forward. When she wasn't CAM the team experimented with Teresa Noyola, Christine Nairn, and Australian Emily van Egmond, but no one else established a foothold.

Now Harvey doesn't just get a player who can play the position, she gets the player who played the position and won championships and golden boots with her at Arsenal. Her ability to interplay with the other attacking players on the team (who we'll get to shortly) will plant fear in the hearts of every defensive unit in the league.

There isn't a clear backup for her in the middle. Fishlock is an obvious choice to move up. Or one of the wingers brought in. Hopefully it's a question we rarely have to ask this season.

After early struggles, this became a position of some strength for Seattle. Rapinoe quickly became the best player on the team (and possibly the league) when she returned in the middle of the season from French side Lyon. And Christine Nairn would finish the season leading the team in assists and tied for third in goals, winning our Rookie of the Year Award.

The recent news that Rapinoe would be with the team the entire season instead of splitting time with Lyon again is arguably as big as any player acquisition this offseason. She dominated the left wing at the end of last season, demanding 90 minute double teams that were unfortunately forthcoming given the team's weakness at forward. The loss of Nairn on the other side is a little unfortunate, but it's mitigated by two factors: we dealt her for the rights to Little, and we filled her place on the wing with a Japanese national teamer and the captain of the Nadeshiko league champions.

Seattle's not tremendously deep on the wing, but Foxhoven played 21 games in the attack for league champion Portland. And Dallstream is a candidate to fill in there. As maybe is Bev Goebel, Kawasumi's fellow loanee from Kobe and their leading scorer.

Verdict: What is this I don't even...

Forward competed with center back for weakest spot on the roster last season. After we learned allocated player Amy Rodriguez would miss the entire season, the team failed to find a player to fill her shoes. And the attempts were many. . Tiffany Cameron, Lindsay Taylor, Kennya Cordner.. At midseason they picked up Jessica McDonald on waivers and traded promising young player Teresa Noyola to Kansas City for Renae Cuellar — sacrificing some of their midfield strength to fix the forward position. But neither player was the answer.

Now they have the answer. A series of trades effectively turned Rodriguez into Sydney Leroux — a dominant world-class forward who holds US national team records for goals in a game and goals scored as a sub in a calendar year and who has the talent and presence to be the face of a franchise. Quite a stark upgrade from the question marks of last season.

Her backup's likely Goebel, who led the J-League and mobCast cup champions in scoring, so even when Leroux is on national team duty the Reign will still have a capable forward on the field.

We Did What Now?

Keep in mind that this isn't a league in which a wealthy oil baron can swoop in and buy all the best players to improve a roster. There is no free agency. There's a salary cap. There's a tight limit on the number of foreign players. This is a single-entity, parity league through and through. To get something you have to give and to improve in one area you theoretically have to deteriorate in another. But Seattle hasn't done that.

The Reign have improved at every single positional group since last season — in some cases marginally, in some cases absurdly. Part of that is that the team the Reign put on the field last season wasn't as strong as the roster on paper, due to the debilitating absences of Rodriguez and half of Solo and Rapinoe. But the improvement goes way beyond them. As GM, Harvey has worked some roster alchemy to turn what looked like lead into what looks like gold.

The 2014 season is far from kicking off and we shouldn't be assuming a playoff berth yet, but to go from competing for worst team in the league to one of the most talented rosters in the league in one offseason in a league with tightly controlled roster rules is a ridiculous achievement we should all be proud of, even if it hasn't yet shown up in the standings.