It might look a little disjointed on paper, but this new look seems to play to the Sounders' strengths.

On the very first day of Seattle Sounders training camp, Sigi Schmid talked about using a formation that might be best classified as an asymmetrical diamond. Rather than be beholden to a standard look that we get used to when seeing formation graphics on TV or video games, Schmid talked about the need to allow players the freedom to do what they do best.

Hot Time In Old Town has mostly positive things to say about the former Fire man.

Have a right back who can attack as good as any of them? Unleash DeAndre Yedlin down the right side. Have a left back who is practically a third center back? That's fine, there's no need to have Leo Gonzalez bombing down the opposite flank. Do you have a box-to-box midfielder who seems more comfortable when playing wider? Put Brad Evans on the right and provide a bit of cover for your streaking right back. Want to give your most creative player more options? Put Clint Dempsey behind a pair of forwards and match him up with an attacking left mid.

As nice as that may sound in theory, up until now there was a bit of a glaring hole on the left side. Sure, Lamar Neagle has played that role, but he hardly covered himself in glory last season. Tristan Bowen was another option for the role, but whatever you may think of his potential the reality is that he has just four goals and six assists in five MLS seasons.

Marco Pappa, on the other hand, is almost perfectly suited for this position. First of all, he's a naturally left-footed attacking player. That alone is something no other player in contention for a starting spot can really offer.

If there's one major on-field red flag that comes with Pappa, it's his propensity for shooting. To get those 26 goals, Pappa needed to fire off 287 shots. That's an average of 11.03 shots per goal. By comparison, the trigger happy Fredy Montero took a comparatively conservative 8.7 shots per goal. At the same time, the Sounders could really use someone with Pappa's ability to score from outside the penalty area. In 2013, they scored a MLS low one goal from outside the penalty area (coming on a Mauro Rosales free kick). Even when Montero was around, the Sounders have never been a team that scored a ton of long-range goals, but last year teams hardly even needed to concern themselves with defending shots from farther out than 18 yards.

What Pappa's addition also does is push players like Bowen and Neagle into roles for which they are probably better suited. Both attackers will still get plenty of minutes, but instead of being forced into the lineup in less-than-ideal positions, they'll be options off the bench that can give the Sounders some much needed late-game energy or provide a spot start.

Pappa probably isn't the answer to all the Sounders' concerns, but he seems to fit nicely into a need the Sounders clearly had.

Here's how I could see him fitting: 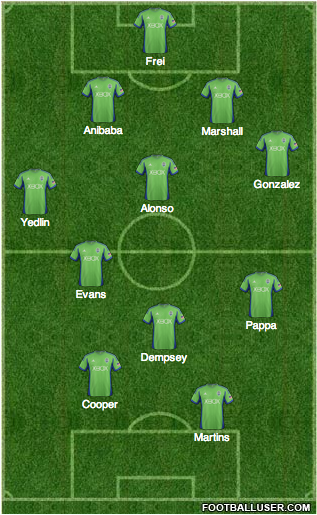