Breaking Down the Breakdowns: Game One

A frame-by-frame look at some of the key plays in Seattle's 1-0 victory over Sporting Kansas City.

Share All sharing options for: Breaking Down the Breakdowns: Game One

A Tactical two-fer today, as I key in on some of the same themes as ScottWinter's fanPost (which is excellent). The difference, of course, is that he relies on diabolical gifs while I appreciate the stark serenity of a still image.

A lot goes on in the course of a soccer match, but if you had to reduce to a single factor the evolution of Seattle's game from early — when Kansas City ran roughshod and was unlucky not to go ahead — to late — when Seattle was in control up to and including their last second winner — a good choice would be the leashing of Graham Zusi. In the first half he had time to pick his head up and punish Seattle with through balls into the box for Dom Dwyer and CJ Sapong. In the second he was marked and shepherded into short passes away from danger.

Here's his distribution in the first half in the center of the attack. Note he only has 6 successful touches — 4 passes and 2 through balls, but they're right down the gut of the Seattle defense into box. The two through balls (on the left) were both very dangerous and both cut out by the speed and last ditch defending of DeAndre Yedlin. 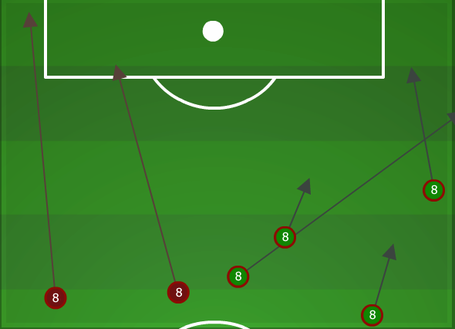 Now here's his second half in the same area. He has more (7) successful touches, but none of them are going anywhere dangerous. 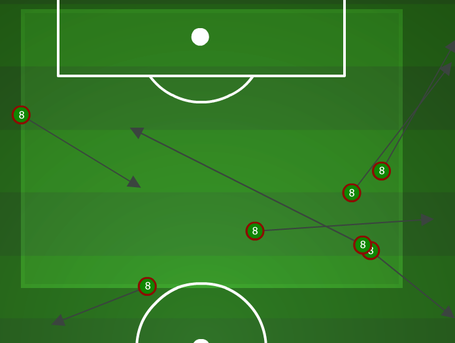 Part of the trouble was likely the fact that Zusi was drifting all over the attacking midfield. Usually he lines up as a winger, but against Seattle it was Jacob Peterson and Sapong on the wings, and Zusi dropped deeper into a midfield pair with Benny Feilhaber, freely roving in the hole. And it seemed like early in the game Alonso was getting lured ahead of him.

So keeping one eye on Zusi, here are some of the key plays in the game:

We talked in the scouting report about Kansas City's full field pressure and the counterattacks that spring from it, and we saw a bracing example just a minute into the game.

The play starts with Lamar Neagle in possession on the right sideline, but he's bottled up by three closing Sporting players, including the fullback Gardner, who's pressuring high up the field. Neagle has no help from above as Oba is staying high and his passing lanes to Alonso and Evans are cut off, so his only play is to drop the ball to Yedlin.

Yedlin receives the ball and Gardner continues the pressure up the sideline, while Peterson stays with Neagle to prevent the easy return pass. Yedlin has a straightforward pass to Evans, but...

Due to some combination of Gardner's pressure and the sloppy conditions, Yedlin slips and shanks the pass, leaving it right out in front of Feilhaber. Gardner alertly sprints up the sideline into the open space behind Yedlin. 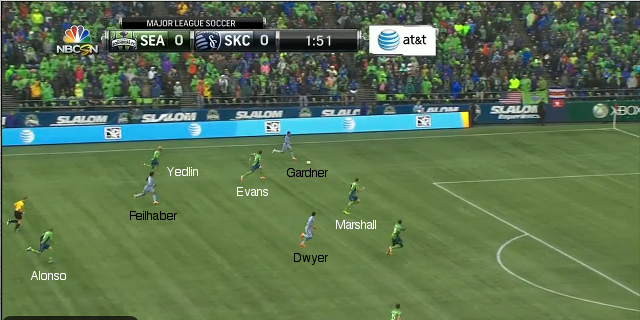 With the counter on, the Sounders are sprinting back to cover. Evans is trying to chase down Gardner. Alonso is trying to get back into the play with Zusi behind him. Here Yedlin makes another mistake. He's clearly not going to catch up to the Kansas City fullback, so his best chance to become relevant again is to pick up Feilhaber, who Evans left. But he loses him and Feilhaber angles into the empty space vacated by Seattle's defenders.

Gardner cuts the ball back to the wide open Feilhaber. Both Alonso and Yedlin desperately try to close him down, but that means Alonso is leaving Zusi, who's trailing right behind him (out of frame).

Feilhaber makes the pass to the onrushing and wide-open Zusi. Yedlin is at a full sprint to close him down and nearly makes it, but Zusi gets off a low hard shot intending to take advantage of the wet surface. Frei ends up making the save but spilling the rebound, which Dwyer is in perfect position to take advantage of after reading Zusi's shot and running past the defense. Fortunately, Frei also gets in front of that shot, but we were very close to being down 1-0 less than 2 minutes into the game.

It's easy enough to say the cause of this dangerous attack was a mistake and a half from Yedlin (who it should be noted went on to have an excellent game), but one of the advantages of full field pressure is that you're there to take advantage of mistakes. If Gardner — Kansas City's left back — isn't 80 yards upfield pressuring the opponent in possession then Yedlin's slip is meaningless or never even happens. Instead they're an inch from a goal.

Another thing the Sporks are good at is winning headers in midfield. They may not be quite as dominant at it as they were in the Kei Kamara era, but it's still a strength. In the 33rd minute, they had a goal kick.

Note that the defensive midfielder Lawrence Olum is pushed up to field this kick, with Feilhaber dropped back into Olum's usual place. Presumably this is because of Olum's ability in the air. The other thing to note here is that Zusi has pushed up into the hole waiting for a flick header and nobody has picked him up. Ideally Alonso is aware of this and closes the range to Zusi.

The strategy of kicking to Olum is vindicated when he beats Evans (Seattle's best midfield header) to the ball and flicks it to Zusi, who scuffs the trap. But it still deflects to a useful area for KC, as Dwyer can pick it up. This is bad for Seattle, but not a disaster. The four Sporting attackers are matched by four defenders.

Dwyer plays a one-two to Zusi and back, which draws Marshall into stepping up to the midfielder and lets Dwyer get behind. He takes a nice touch into open space. It's still not a disaster, as Traore is free and in a good position to pick him up.

Okay, now it's a disaster. Traore slips as he cuts — another casualty of the wet surface. Dwyer is past Marshall into goal and Traore has fallen out of the play. He lines up a hard 20 yard shot...

...which Frei punches away in his best save of the game. On the down side, it's punched straight to Peterson. Mercifully, the KC forward volleys the rebound about 30 yards in the air. A pretty simple play for Kansas City is again inches from the go-ahead goal (twice). Obviously, Traore slipping was bad, but the crucial mistake was leaving Zusi free to rampage in front of Seattle's defense. That's the adjustment that the team made at halftime, and it helped turn the game.

I'd be deservedly tarred and feathered if I didn't break down the game winning goal, so let's do that. I'm sure you've actually seen a hundred times the dribble up the field by Alonso, the pass up to Dempsey, the switch to Okoli, the cross to the box, the Dempsey header, and the scrambled finish. So I won't focus so much on that. Instead I'll focus on the Sporting mistakes that created the opportunity. There were two main ones.

First, Vermes subbed Ike Opara on for Benny Feilhaber in injury time just moments before the play. Injury time subs are a great way to eat 30 seconds or whatever, especially if the outgoing player has mastered the art of walking off the field just slow enough to not get carded. But Feilhaber had been having a solid game holding down the midfield. Subbing out a forward was almost certainly the better choice. Second, the team got greedy. When you're less than a minute away from a road draw against a good team in crap conditions. . especially a team that's burned you in injury time so often, you probably don't want to be taking chances to try to get a winner. 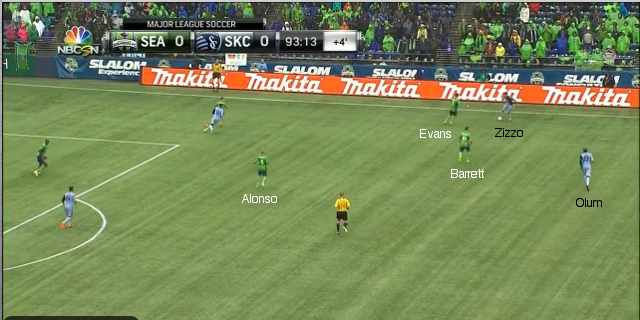 With less than a minute left, Zizzo (Update: whoops, this was Zusi. Wrong Z) has the ball on the right sideline with not a lot of help. The right play here is to tap it back to Olum (or to the fullback who's probably down the sideline). 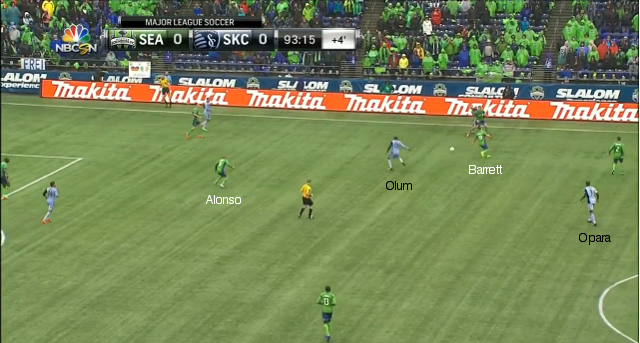 Instead they decide to ATTACK ATTACK and Olum rushes forward to get behind Barrett. But Zusi's pass is deflected by a hounding Evans so it goes behind Olum and into a huge open space in midfield about exactly halfway between Alonso and Opara. The right play for Opara here is to hang back and contain any threat.

Instead he decides to ATTACK ATTACK and he rushes the ball. Unfortunately for him Alonso is faster than he is. The Sounder is going to get the ball first and Opara's momentum is still moving forward.

And now we're off to the races.

I'm sure it's not a coincidence that the two players largely at fault here were substitutes (Update: Actually not. See above. Zusi was at fault here). Decision-making is a skill, just as much as speed or a great shot or passing touch. And if you don't have it, you're going to cost your team games. And if you do have it, you're probably going to be undervalued by fans who don't appreciate it as a skill (Hi Brad).