Diamonds aren't forever, it turns out

Sounders suggest they'll be going with something that looks more like a 4-2-3-1.

Share All sharing options for: Diamonds aren't forever, it turns out

All along, we've been operating under the assumption that the Seattle Sounders would be playing a sort of hyprid-ized version of the diamond. This wasn't just idle speculation, either. On at least a couple occasions, head coach Sigi Schmid has said as much: that Clint Dempsey would be playing behind a couple forward, that Brad Evans would likely be on the right and a more pure-attacking option would be on the left. It made sense, even if it wasn't the most popular option.

But it was all mostly theory. Dempsey, of course, missed all of training camp and didn't join the team until a day before their season opener.

A funny thing happened when he actually took the field. The Sounders didn't play anything that looked remotely diamond-like, asymmetrical or otherwise (just like they hadn't done during preseason). Rather, it looked and played more like a 4-2-3-1/4-3-3 with Martins on top, Dempsey playing more of a withdrawn forward and a pair of attacking wide players joining them.

You could certainly argue that this formation was a bit of out of necessity, as the Sounders were clearly trying to get the winner in their home opener. But after hearing Schmid talk, there's apparently more to it.

"That's probably the way we'll continue to play," Schmid told reporters on Tuesday. "There's Clint, there's Cooper, there's Neagle and there's Pappa. There's a bunch of guys that can play in those slots for us."

For anyone pining to see the end of a diamond, this has to be music to your ears.

If we pull this back a little farther, it probably also means that Brad Evans will be playing a bit more centrally. I doubt he'll be alongside Osvaldo Alonso in a true double-pivot. More likely, Alonso and Evans will have roles that are not quite as rigid. Alonso will most likely spend most of his time in the defensive third, while Evans will be expected to make those late runs he's kind of made his trademark. That also allows Evans a bit more freedom to provide cover when DeAndre Yedlin goes bombing up the sidelines and keeps whoever is playing as the right attacking player from having to worry too much about that part of the field.

Keeping in mind that average position maps are imperfect tools, here's how Saturday's looked (via ESPN): 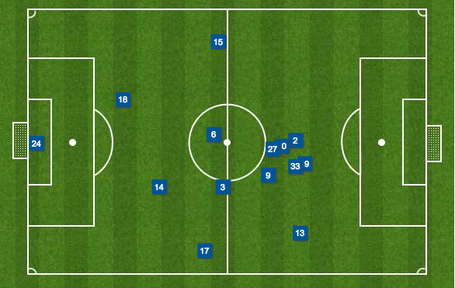 As you can see, both fullbacks were pushed pretty far up the field. It's also a little deceiving as it makes it look as if Lamar Neagle and Marco Pappa were pretty centrally located. That's one of the shortcomings of this tool, though, as they were really mostly hanging out on the wings, but their switching made it look this way on the balance.

Take those two out of the equation and you still have a what amounts to three guys essentially playing forward (well five I suppose, but only three of them were ever on the field at the same time). After Dempsey came on, we also saw Kenny Cooper drift out more wide.

While anyone looking for tactical consistency may be annoyed by this development, it is further proof that Schmid is willing to adjust based on personnel. Maybe this is the formation that best fits, as many have long suggested. Guess we'll find out.