In response, the PSRA posted a burn book of the 'scabs' online.

Dave Clark had the recap for the U.S. U17 Men's National Team's 0-0 draw against the Sounders Academy at Starfire on Monday.

Last year, Corey Rockwell, the AR for Sounders and Timbers match on Oct. 13, 2013 signed a red card and threw it into the stands. The Internet fumed with anger. Finally, Mr. Rockwell headed over to BigSoccer.com to clarify what actually happened and why it really wasn't a big deal at all.

Chad Marshall was the lone Sounder to be named to ProSoccerTalk's MLS Week 1 team of the week.

The replacement referees will stay in MLS after the Professional Referee Organization and Professional Soccer Referees Association failed to close the gap this week. The latest rounds of negotiations were cancelled on Tuesday. The PSRA posted a pretty biting letter referring to the replacement refs on its website as well.

The Sounders opened up the season at No. 3 in MLSSoccer's weekly power rankings. Here are the Castrol Index Weekly Top Plays/ers.

With all talk of expansion going around MLS these days, here is an interesting article that tries to figure out what the optimal number of teams to have in a major league.

Our own Jeremiah Oshan has a great run down of the potential of MLS's partnership with USL Pro, specifically the Galaxy II.

The Vancouver Canucks aren't having the best of years, and Eighty Six Forever says it is now officially time to convert Canadian hockey fans into fans of MLS soccer. It is a nice little ode to soccer, but also one that easily forgets hockey reigns supreme in Canada.

The Columbus Crew moved away from Fox Sports Ohio and onto the Time Warner Cable Sports Channel, this included a 75-mile blackout radius for all other cable providers. Massive Report checks in to see how this will affect all the Ohioans trying to watch Columbus.

Sporting Kansas City announced the signing of Spanish midfielder Antonio Dovale on Tuesday. Dovale will bring some versatility to KC's lineup as he started out at midfielder but was converted to left back for the past couple of seasons.

The San Jose Earthquakes welcomed back midfielder Khari Stephenson after releasing Walter Martinez to open up a roster shot. Stephenson played with the Earthquakes in 2010-12 before moving to Real Salt Lake last season.

CONCACAF has agreed to a partnership deal with MoneyGram to become the official sponsor of the Concacaf Champions League and exclusive rights to the money transfer category. The company also allows naming rights to the golden boot award.

The Guardian has been running a series on suggested rules to improve the quality of play in the game. Yesterday, the paper tackled the idea of added time.

Details and images are starting to come out of FC Barcelona's camp on the upgrade to its home field. The club hopes to have everything finished by 2021, which amongst other things will add more seats to Europe's largest soccer venue.

Poor Stuart Holden can't ever catch a break (or maybe just too many breaks) after Bolton announced he will miss six to nine months with a knee injury.

.@stuholden will be out of action for between six and nine months following an operation on the ligaments in his right knee. #BWFC

Newcastle manager Alan Pardew was hit with a seven-match ban and fined £60,000 for headbutting David Meyler in a scuffle during a win over Hull City on March 1. It is the longest ban handed out to a manager in the history of the Premier League.

Baron Capital, an American investment form, acquired a quarter of the Manchester United shares available on the NYSE, now owning 24 percent of the shares sold by the Glazer family in 2012. Those shares still only represent approximately 2.5 percent ownership of the club. The total cost of Baron Capital's investment is estimated at $151 million.

Arsenal locked up Gedion Zelalem's rights for quite some time. The German youth international is eligible to play for the USA if he wants. At 17, he already made his debut for Arsenal's first team in the FA cup this year.

Here is a little diagram from the Daily Mail that shows how absurd Bayern Munich has been as of late. 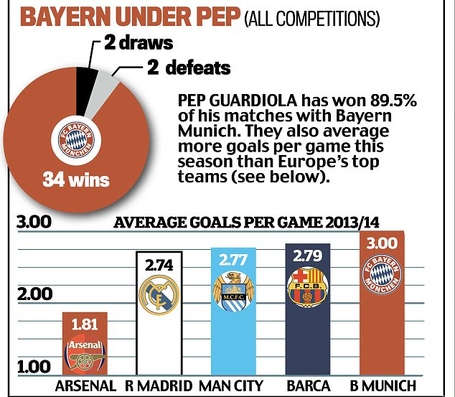 Two members of Russian parliament wrote to FIFA asking it to ban the USMNT from the 2014 World Cup because of the U.S.'s military aggression against several sovereign states. This comes after word that there has been a bit of a push to have Russia barred from the World Cup as well.

Soccer on TV - Five To Watch