Dylan Remick should be the Sounders first choice leftback

The 22-year-old, a year out from his time at Brown University, was easily the most impressive player on the pitch Saturday and deserves consideration as the Seattle Sounders starting leftback moving forward.

Share All sharing options for: Dylan Remick should be the Sounders first choice leftback

Throughout preseason, the Dylan Remick express has rolled along as we approached First Kick. Several outstanding assists, defensive prowess and a willingness to attack were just a few key highlights of what the 22-year-old drafted from Brown University was able to offer the Sounders in his second year with the club. Remick got those chances as an early preseason injury sidelined Seattle Sounders stalwart leftback Leo Gonzalez, yet it's been a looming certainty as First Kick approached that once the Costa Rican was ready to go, Remick would resume his place on the bench.

There are always doubts about performance in preseason and how it carries over the the regular season. Oppositions are unbalanced, working with players they barely know for long stretchs of time, and Remick's ability to translate the ability he showed then to a season opening matchup against the defending MLS Cup Champions was a significant concern. Saturday rolled around, the rain poured down, and like a beacon on the left side of the field Dylan Remick stood out as perhaps the most impressive player on the pitch for the Seattle Sounders.

With the Sounders use of Osvaldo Alonso and Brad Evans in a double pivot, you expect those two to represent the core driving force of the Seattle Sounders offense; and with 79 and 75 touches respectively, they were. However, coming in right behind them were DeAndre Yedlin and Dylan Remick with 75 and 73 touches, evidence of their incredible influence on retaining and using the ball. Furthermore, Remick was a defensive rock for the Sounders winning 5 tackles, earning 4 interceptions, and making 3 clearances on the evening, marauding up and down the left flank. While his pass completion percentage of only 73% is something to keep an eye on, this was against a team that employs high press defense. This naturally pushes players into making more errant passes.But it's tactically where Remick stands to make his most important contribution. 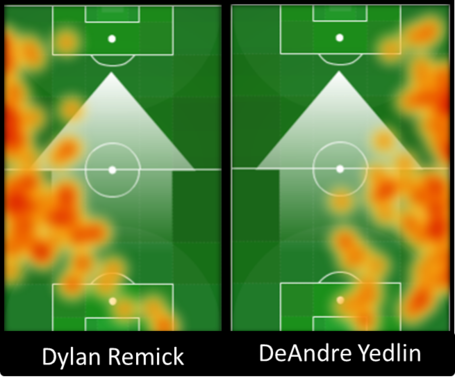 Paired with DeAndre Yedlin on the right, Dylan Remick represents an evolution in the fullback role within MLS. At the top levels, the fullback is by far the most important position in the modern game of soccer: whole games live, die, or are altered based on the ability of teams to limit or restrict opposition fullbacks. On Saturday, the Sounders took one huge tactical step forward when they used two attacking fullbacks to massive effect, stretching a narrow Sporting KC side across the field with nearly flawless aplomb. As their heat maps show, the two of them played far into the Sporting KC half of the field throughout the game. This has a two-fold effect: one, they represent an additional player in attack, both on the overlap with the wide midfielders and as an extra crossing option, and most importantly (in terms of Remick) it pins back the opposition midfielders and fullbacks.

Pinning back the opposition fullbacks leaves opposition sides with two options in possession against the Seattle Sounders: play through the center and challenge the waiting hungry jaws of Osvaldo Alonso: or play it over the top and challenge Chad Marshall, who I'm fairly certain has dragon wings grafted to his body. In this way, Seattle specifically forces oppositions into challenging their two most dominant defensive players if any sustained attempt at possession is to be made.

On the flipside, Leo Gonzalez, with his slower foot speed and emphasis on defense, doesn't have the ability to pin back the opposition in this manner that allows the Sounders to recycle possession. His defensive duties give opposition sides an outlet for their relieving pressure that allows them to build from the back on the ground rather then requiring them to challenge Seattle's defensive monsters. It's not to say that Leo Gonzalez doesn't have the skillset to play this role, but his slower speed, issues in recovery, opens the Seattle defense up to serious counterattack problems that any coach worth his salts would avoid like the plague. That doesn't even mention potential weaknesses in his attacking game.

The tactical option Dylan Remick represents for the Seattle Sounders not only aids their possessive style, but also gives them the ability to rapidly recycle possession. In addition to that tactical advantage, he adds another powerful building block in their possession style, as well as a high quality defensive piece.