Normally when a team acquires a two-time Defensive Player of the Year it would be huge news. Somehow bringing in Chad Marshall from the Crew was quiet and overshadowed. Against Sporting KC some of what he does demonstrated that the defensive structure is shifting.

Share All sharing options for: Chad Marshall changes how the defense plays

The shutout against Sporting Kansas City does not tell the whole story of the defense. More notable may be that there were five key passes and only one went right at the center of the defense. They were only four for 21 in crosses. New addition Chad Marshall had a lot to do with that. He was dominant in the air, but his game is more than just that.

"Chad is a big, big addition for this team. He's a calming factor with the ball and without it," Assistant Coach Ezra Hendrickson told Sounder at Heart this week.

The defense and the transitions to offense are changing. Long balls from the back are going to be less frequent. Without a big target man regularly playing the transition is going to be a bit different. As on Saturday they could start with a headed ball.

"He doesn't blindly just head it. There are times, because sometimes you get pressure from a forward and you aren't able to start your attack right away after winning a header, but when he has a chance to he's able to place and pass the ball with his head. That's also good because you can get guys going on the break," Ezra said. "The key now is for our midfielders, and sometimes the forwards because he heads it so far, to anticipate that and they are on the run already and can pick up those second balls." 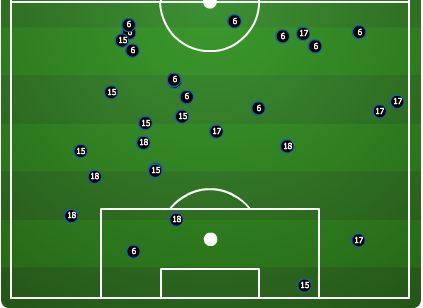 That map is of all of the non-Marshall recoveries (second balls). Not all of them are from Marshall's play. But some of them are. Looking at Chad's defensive actions you can get a better idea of his effect on winning first balls and providing opportunities for second chances. 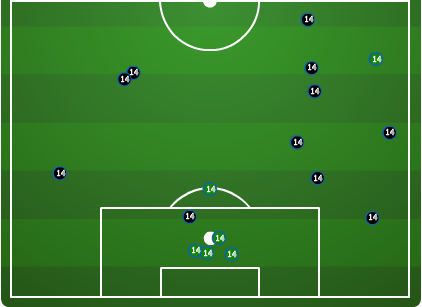 Saturday night had three of the fastest players on the team around Marshall. Both full backs and Alonso can step just a touch quicker to the ball. When Anibaba enters the rotation there is another man who won't lose a step compared to wingers and forwards in the league.

In the short MLS history Seattle's leader on the backline is a mix of Hurtado, Tyrone Marshall and Jeff Parke. All players with good seasons here. None had quite the game of the new Marshall.

"I played with Chad," Hendrickson reminded SaH about their time together in Columbus. "One of the things is that his positioning is very good. He's not slow, but he puts himself in such good positions that he doesn't have to use his speed. He's always there anticipating balls. He's a very strong tackler. Where Tyrone was maybe a faster guy, Chad's positioning is better."

A defender that is in the right space, who is composed in short passing situations and when he wins the aerial duel can start a fast break? That's different for Sounders FC and part of the reason the defense is going to be just a bit better than in past seasons.