Can Lamar Neagle be successful as a wide player?

There's no two ways around it: Neagle has been more successful as a forward than as a midfielder, but the case isn't quite that open and shut.

Share All sharing options for: Can Lamar Neagle be successful as a wide player?

Lamar Neagle is not a perfect player. On that, I think we can all agree. But that might be the only thing Seattle Sounders fans can really come to anything close to a consensus on when it comes to discussing Neagle's positive and negative attributes.

Perhaps more than any other player on the current squad, opinions seems to be most deeply divided on how good Neagle may or may not be. I won't pretend to be able to settle that debate anytime soon, but I do think it's at least worth discussing one of the sub arguments when it comes to Neagle: Is he only useful when used as a forward?

The numbers are pretty clear. Over the last two seasons, Neagle has scored 10 goals across all competitions. Every single one of them came while he was playing up top, mostly in a two-forward set with Obafemi Martins. In the 10 matches he's started as a wide midfielder since rejoining the Sounders, Neagle has not scored and only picked up his first assist a week ago against Toronto FC.

Even if you account for the playing time disparity in the two roles, the situation doesn't look much better. Neagle is basically scoring at a clip of one goal ever two games as a forward and is chipping in an assist once every five games. Those are solid numbers, verging on elite if you could extrapolate them over 30 games.

By contrast, zero goals and 1 assist in 10 starts as a midfielder is absolutely nothing to get excited about. But this is also the same Neagle who scored five goals and had two assists as a wide midfielder in 2011 while only playing about 1,000 minutes.

It's probably a bit unfair to only look at goals and assists, too. As we know, luck can play a significant part in both of those elements.

While it's still hardly perfect, I looked at the available information from Neagle's first three games this year to see if we couldn't find some patterns: 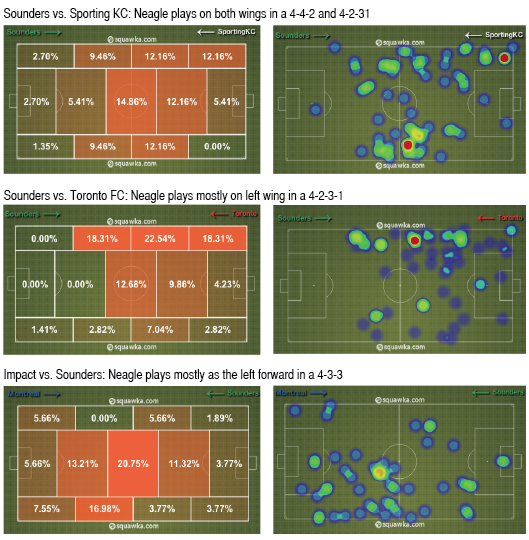 As we've discussed quite a bit, heat maps are hardly perfect. In some ways, they can be misleading. But bear with me here. What I wanted to see was if Neagle was playing much different when he was at forward as opposed to midfielder. Anecdotally, I think we can safely say Neagle was "better" against the Impact, so I'm not trying to use these maps as a qualitative piece of evidence.

We do see some patterns here, but maybe not what you'd expect. Almost no matter where Neagle was positioned, about 30 percent of his action comes in offensive areas of the center of the park.

Interestingly, the big change in the Impact game was not just how rarely he touched the ball on the offensive wings, but that about half his touches were on the defensive side. This was clearly part of the game-plan, as the Sounders were playing deeper and looking for counters with Obafemi Martins often the only true forward. Neagle only attempted 20 passes -- a season low -- but he completed 75 percent of them and nearly ended up with two goals and an assist.

The counter plays right into Neagle's strength though. While Neagle is a useful player for his willingness to track back and harass the opposition, his best moments on offense come when he's got some space and running at players, rather than trying to dribble in tight confines.

If I were to try to draw any real conclusions from this admittedly small sample, it's that Neagle is best deployed in a situation where he's not asked to be a traditional wide player. In that sense, I understand why the decision was made to play him on the left and Marco Pappa on the right against Toronto FC, as it encouraged both players to cut into the middle rather than pump in crosses. There's no reason that Neagle can't be successful when deployed in a wider position, but he's going to need the freedom to cut in a lot. In a fluid 4-2-3-1 setup like the one we saw against Toronto FC, I could see Neagle having some real success. He was allowed to cut in, even encouraged to do that. If he's playing in wider positions, it's probably better if the full back isn't doing as much overlapping. He might not be a goal-every-other-game-style success, but certainly enough to justify his place on the pitch.