Stats: The Hows and Whys of Bus Parking

Seattle let Montreal shoot with impunity in the second half on Sunday? Is that a good idea?

Share All sharing options for: Stats: The Hows and Whys of Bus Parking

One of the most interesting tactical takeaways from the Montreal game was the rictus-inducing defensive shell the Sounders frequently went into late in the second half with a two-goal lead. I'll admit up-front to a bias here. I hate bunkering with the lead. I think the guiding principle is that once you get the lead you should continue doing whatever it was that got you the lead. Sure, if you were lucky to take the lead and it was against the run of play, there's an argument for quitting while you're ahead and protecting your lead. But that's almost never the case with the Sounders, who are a very talented, competitive team built to attack, even on the road. And when Seattle takes a lead it's almost always because they were outplaying the opponent. And seemingly the worst thing they could do at that point would be to stop outplaying the opponent.

I think to some extent the existence of the late bunker exists in soccer for the same reason soccer has so many other statistical and tactical quirks: scoring is rare. A defensive shell with a 4 point lead in basketball — where the players would presumably throw the ball across half the court after a defensive rebound to a single outlet attacking player while the other 4 stay at home on defense — would obviously be absurd. Even that look wouldn't really prevent the opponent from scoring relatively regularly and meanwhile you've dropped your chance of scoring anymore to almost nothing. But because in soccer the most likely result no matter what you do is that the opponent doesn't score, it's easy to see a bunker as successful, even if really it was a bad idea and the opponent ended up not scoring because scoring is rare.

A 'bunker' isn't strictly defined, but some clear signs are: a) even in possession the bunkering team won't have more than 2 or 3 players in the opposition half, b) opposing players are allowed uncontested possession beyond the center circle, and c) even under little or no pressure defenders will boot long clearances rather than try to play out of the back.

On Sunday, the Seattle bunker began in earnest around the 65th minute (notably not just after Obafemi Martins scored the 2nd goal. Seattle actually had some good possession and good chances in the few minutes after that before going defensive). Here's a clear example:

Note Seattle has 9 field players back behind the ball. Only Martins is left in the attacking end offscreen. Sometimes this is justified when the opposing team is suicidally launching their entire 10 (or 11) forward and you need more players to cover. But here Montreal only has 7 attacking players, leaving 3 defenders back. Seattle clearly has the numbers to try to contest the ball, but they're 10 yards off the player in possession deep inside their own half. Andy Rose is notably not doing anything here other than standing in space. He's adopted the bunker mindset. He doesn't want to contest the ball even though he has plenty of cover because it seems too risky. And in the end, that creates risk. This play resulted 15 seconds later in an Andrew Wenger shot from inside the box.

That sequence was followed by some even worse bunkering for two minutes, which included a few good chances from Montreal when Seattle wasn't challenging Justin Mapp on the ball and he provided dangerous crosses. That was way too early for such a deep bunker, and the team eventually recovered and was able to hold possession and create some chances until about the 80th minute, when the bunker was rebuilt. 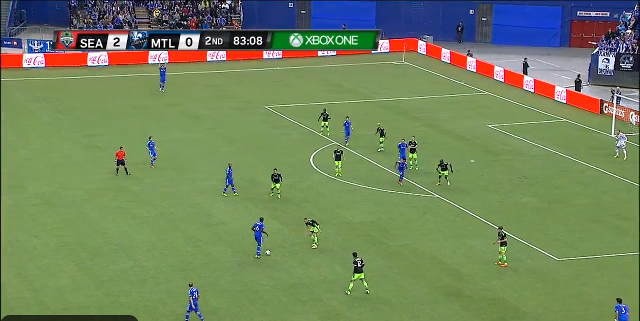 Note here that Rose is backing away from a central defender (Hassoun Camara), who's dribbling forward within 35 yards of the Seattle goal. Again, Rose is backing away from a central defender 35 yards from goal. Also note that Seattle is not only bunkered deep, they're bunkered narrow. They outnumber Montreal 6 to 3 in the box, and the cost of that advantage in numbers is that they've abandoned the flanks. The outcome of this play is that, somewhat predictably, the Impact move the ball to the left flank under no pressure and Heath Pearce is able to dribble to the endline in the box and cut back a very dangerous pass, which is deflected out for an uncontested volleyed shot by Blake Smith, which Djimi Traore is very fortunate to clear off the line. And a minute later, Eric Miller shot off of the post.

In the end, Seattle prevented a goal, but not because they prevented good chances (which is the correct way to prevent a goal). They succeeded because scoring is hard and Montreal failed to do it. Many players and fans went home thinking the bunkering tactics 'succeeded'. But really what happened is that Seattle was outshot 9-4 in the last 20 minutes, allowing 4 shots from inside the box.

So what do the stats say about bunkering? Again we suffer from the fact that we can't track every player's position at all times, so there's no stat that will illustrate a bunker. But we can take hints from the scoreline. Buses are almost always parked when a team has a lead (the exception being a bad team or a road team playing for a draw). Here's a table of the shooting rate (shots / 90), strike rate (goals / shot), and scoring rate (goals / 90) for teams at various scorelines in MLS over the last three years:

It's clear that there are two intersecting trends here. As a team goes further behind, they take more shots. But the success rate of those shots goes down, as their opponent is more defensively compact and the team that's behind takes more speculative chances to get back in the game. In the other direction, teams with leads shoot less often but have a much higher success rate on those shots, as they're likely on a counter against a compromised defense.

The product of those two trends peaks at +2 and +3 goals, where teams with large leads are more likely to score per minute than any other scoreline thanks to the very high strike rate. But not far behind is -1, where the lower strike rate is made up for by the increased number of shots. And note this is an average. To actually take advantage of the trends as a team with a lead, you still need to earn your shots and prevent an opponent's. The average ratio of shots of a team leading by 2 to the team trailing is 10.8 to 14.1, or about 75%. On Sunday Seattle's last 20 minutes (the prime bunkering minutes) had a 44% shot ratio.

Another way to look at it is that each Montreal shot was a weighted coin flip, with about a 9% chance of succeeding (based on the scoreline). Using a binomial distribution with n = 9 shots and p = 9%, you get the odds that Montreal would score some number of goals:

A 20% chance of coming back in that game wasn't a lot, but it was way more than it should have been. Seattle went from being a team outplaying their opponent AND having a lead (which should be nearly insurmountable) to just being a team with a lead. That's the danger of the bunker.

A common defense of the bunker is that if things start to go bad — if your multigoal lead gets cut to a one goal lead — you can just switch out of it. But I think that's too simplistic and rarely works out. There are so many factors working against simply switching back to holding possession. First, despite the narrower score, you're still protecting a lead. And all of the psychological factors that lead to players just holding on still apply. Second, the trailing team — who just scored a goal — will suddenly be full of belief and momentum and morale and will be aggressively trying to repeat the goal, while your team will be demoralized by conceding and more cautious. Third, late in the game you've likely already made defensively-oriented substitutions. . swapping out a forward for a defender or defensive midfielder, say. . which make going back on the attack more difficult.

Many of my memories of past buses parked have been ones the Sounders have been benefited from. In the 2011 playoffs, Real Salt Lake came into CenturyLink Field with a 3-0 lead and a defensive attitude at great odds with their usual possession style. And it nearly cost them a series they should have had in the bag. The retroactive narrative is that of course Seattle lost because it was over after leg one and playoff futility etc, etc. But that conveniently forgets that Seattle was very close to tying that game multiple times and Real Salt Lake looked shell-shocked, giving up chance after chance. Seattle ended up outshooting RSL 17-4 and twice missed high on what would have been the tying goal from shots from inside the box.

Then last season, Seattle became the first MLS team to eliminate a Mexican side in the CCL knockouts when they defeated Tigres 3-1 at home. To be fair, Tigres was down a player for the full second half, but still their defensive shell in the second half was their undoing, as the first 2 goals in the Seattle comeback came from defenders (including one from central defender Djimi Traore) who were left free to push deep into the opposing half by a bunkered opponent.

Some of my favorite memories as a Seattle fan came from an opponent trying to bunker with a lead. And I guess my overall point is, I'm not sure why we should be in the business of giving those memories to our opponents.