Sounder at Heart readers were generally pleased with the players' performances in Sunday's 2-0 road win in Montreal. As of 5 p.m. Wednesday, 477 people had cast votes in this week's community player ratings. Ten of the starting 11 finished with ratings of "adequate" (5) or higher, led by Obafemi Martins' 7.92.

Here's a look at the scores from the fans. Thanks to Philip Pirrip for the suggestion last week that led to a much better format this week. Reader scores follow the player's name, followed by my ratings from Monday in parenthesis and then the difference between those two numbers in italics.

Also below the ratings we'll share a candlestick chart mapping out the voting.

Djimi Traore: 5.95 (5) +0.95 Readers were much stronger behind Djimi than my ratings published Monday, giving him a nearly 1 point higher rating, on average, than the 5 he earned from me. Perhaps that is not a surprise given MLS actually named Traore to its first 11 for the week. I was mighty surprised by that honor, especially considering that Chad Marshall seemed to be the more active of the two and was completely dominant in the air, winning 100 percent of his headers. I wonder how much weight the folks at MLSsoccer.com give to the big plays, as Djimi clearly had one with his goal-line clearance.

Dylan Remick: 4.61 (4) +0.61 Comments with the ratings story earlier in this week showed that some readers felt I was too hard on Dylan. The ratings here reflect that, with readers pushing his rating closer to the "adequate" 5 score than the "flawed" 4. To me the ratings difference isn't a big deal, I'm glad everyone expresses their feelings. More important was the discussion of my criticism of particular aspects of the performance, for example the reader who pointed out it could have been coach's design that Justin Mapp was beating Dylan to the right and getting off crosses. Perhaps coaches told Dylan not to let Mapp cut in to his favored left foot under any circumstances, even if that meant giving up a cross or two. Makes sense.

Lamar Neagle: 7.17 (7) +0.17 Based on the comments so far this season, I'd guess that Lamar might end up being the most talked about Sounder this year. Everyone seems to agree that he is better when he is playing closer to goal and perhaps is not as effective when he is forced further out wide. If that's the case it certainly lends itself to the thought that the 4-3-3 is a better formation for Lamar. I will say that personally I reserve judgment this early in the year. It's possible that Lamar will continue to improve and have an impact even when in a four-man midfield. I guess we'll see. I imagine we will see plenty of different formations this year as we face injuries and national team callups, giving us a big 2014 base from which to have the discussion.

Cam Weaver (86th minute): 4.93 (incomplete) ~ I wanted to put a note in here to say that as many people chose to give Cam an "incomplete," a zero on the subs voting chart, than actually entered a rating. Those who did enter a rating gave him about a 5, which is pretty similar to all of the subs in this game - whom it appears the group thinks was OK, but nothing special on Sunday.

A graphic look at the ratings. The horizontal lines are at the median of each player's ratings from readers. The lines above and below will extend to the 75 and 25th percentiles respectively, though the ratings are clustered enough that it would be rare for both to differ from the median. In theory, a player with very high variance would have longer lines. 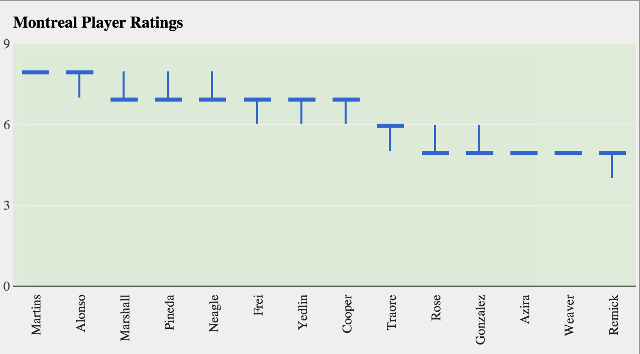