The Sounders broke out a 4-3-3 against the Impact and could well use it again with Clint Dempsey still out.

The 4-3-3 made a rather dramatic debut in the Seattle Sounders' 2-0 win over the Montreal Impact last week. The main impetus behind it seems to have been two things: matching up with the Impact's 4-5-1 and coping with Clint Dempsey's absence.

As it were, those two elements are still at work heading into Saturday's encounter with the Columbus Crew.

Let's look at some of the other elements that could go into Sigi's decision:

The Crew are likely to deploy a 4-2-3-1 that looks and behaves quite similarly to the Sounders' version. That means Federico Higuain is deployed in almost more of a withdrawn striker/No. 10 role, in basically the same mold as Clint Dempsey would be. Tony Tchani fills the more box-to-box Brad Evans role; Will Trapp is their version of Osvaldo Alonso; and Bernardo Anor and Hector Jimenez are the wide mids.

While the 4-3-3 matches up nicely with the Crew, at least this week one of the reasons to use it is that it makes good use of the Sounders' own personnel.

Gonzalo Pineda showed last week that he's an absolute plus. He was ostensibly deployed alongside Andy Rose as dual box-to-box midfielders. We saw how dangerous he could be on set pieces, serving in a perfect ball and picking up the assist on Lamar Neagle's goal but he was also a calming force making simple passes and keeping the ball moving. He ended up 48-for-57, completing just four fewer passes than Alonso.

Here's the average position map from the first 45 minutes against the Impact: 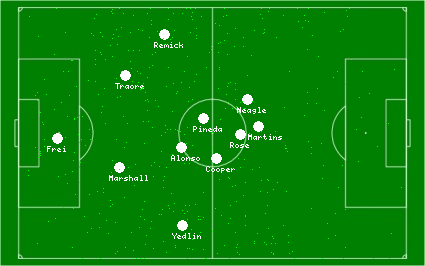 Essentially, Pineda gives the Sounders a lot of what Marco Pappa would give on set pieces but without quite as much attacking flare -- but also considerably less risk. As long as Dempsey is out, Pineda seems like a natural play.

The 4-3-3 would also install Evans -- assuming he's healthy -- at a much more comfortable box-to-box role. Evans' shortcomings are well documented when it comes to being a central playmaker, but that's not what he'd be asked to do in this formation. Essentially, he'd be Andy Rose-plus, a midfielder who can win aerial duels, is a willing defender, can make the incisive pass when needed and is a capable finisher.

Schmid is notoriously hard to predict when it comes to starting lineups -- especially in a week like this -- but he's also prone to using the old "if it ain't broke, don't fix it" mentality. Given that, I'm guessing he tries to the 4-3-3 again.

My suspicion is that Dylan Remick will get another shot at left back, as Sigi seems to be in no hurry to rush Leo Gonzalez back until he's really 100 percent fit. The rest of the defense seems pretty solid, so I doubt there will be any changes there.

Lamar Neagle is coming off his best game, frankly, is quite well suited for a wide forward in the 4-3-3. His willingness to track back is a lot of what this formation work. The other forward is tougher, but I think Kenny Cooper gets the nod. I suppose Sigi could use Pappa here, but Cooper played well enough that I don't think that's entirely necessary. Plus Pappa would likely turn this into more of a 4-2-3-1 and that could really use a classic central playmaker. I suspect Pappa will get another chance once Dempsey returns.