A fan group in Southern California wants to purchase the Goats.

Times Square is lighting up with Rave Green: MLS took out an ad in New York's #1 Tourist Trap advertising the coming of the 2014 MLS season. It features Clint Dempsey and one of those teams that wears a lot of blue. I think it's Vancouver. Wait, no, Montreal. San Jose? Aww, come on. Uhh, Philadelphia? Dallas? NYC2? COME ON!

It wasn't a long (or particularly fruitful) stay at Craven Cottage for Dempsey, but he still gets a warm and fond farewell from the Fulham faithful here on SB Nation. He now has to pull off a Kearse, twisting around one way joining the National Team before spinning back the other and being a key figure for his club.

There's more cool news out of Chivas below, but more relevant to Seattle is their reception of Eriq Zavaleta on loan. Sounder at Heart already covered the actual story, but here's the local view from So-Cal.

Two Sounders make it onto MLSsoccer's "Top 20 Goalscorers in MLS".

AC Fiorentina is coming to the Emerald City and teaming up with AC Seattle to spread their development philosophy in the Northwest. 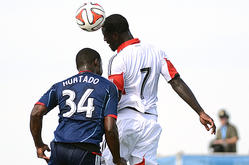 With the season about to start, MLS has released a huge PDF of league facts and records. This kind of document is a holy tome for those of us in the sports journalism world. So if you're wondering, for example, what Seattle's record against Sporting KC at home is, that number is in there. They also made my research on an upcoming attendance article much easier.

The league is currently the owner of Chivas USA, and they won't want to hold onto that team any longer than they have to. Finding a buyer for the second LA team is a top priority. Chivas supporters group Black Army 1850 is trying to make their job easy by purchasing the team themselves. It almost certainly won't come to fruition, both because the group is unlikely to come up with the money and due to the reluctance of major American sports leagues to allow fans to be owners (ala Green Bay). That doesn't mean I can't root for their success. Seriously, you can't make me stop.

The Vancouver Whitecaps claim that they aren't a Superclub, but if rumors about picking up Chilean Pedro Morales are true, they might be full of it.

People may not agree (maybe even YOU), but I consider Bill Hamid to be one of the better keepers in MLS. Hamid credits Kasey Keller for helping him over the offseason during a January camp.

He has been spending the offseason taking shots from Eddie Johnson, who has looked good so far but has yet to make the DC offense a known commodity. Eddie sat down with the News Tribune and talked about a number of things, including "getting used to" not playing in front of 40,000 fans on the regular, and how Seattle is his offseason home now.

RFK Stadium is hallowed ground in American soccer, and as we all know now is more out of shape than a certain SAH writer after a trip through the chips aisle. So when Spain comes to the Nation's capital in June as part of a doubleheader with the D.C. United-Columbus Crew match, it will be at the NFL's FedEx Field. Perhaps the problem at RFK is that for the last 50 years, it has been taken care of by Groundskeeper Willie.

Surprisingly, it appears MLS players actually expect referees to look out for their safety. That is the jist behind the release that the Players Union sent out on the subject of the referee lockout. If you want an idea of what MLS will look like in a more physical form, one need only look to the match played in Vancouver's BC Place last night. There isn't much time left for the league to make this right.

With two cities in Texas already home to MLS teams, and two more vying for inclusion only a short distance away, it appears that Austin and San Antonio may be in an either/or situation for inclusion at the top of the US Soccer food chain.

Hot Time in Old Town wonders if MLS will ever be able to (or even want to) make the transition away from Single Entity, and away from the salary capped nature of the league. Also, Dat Jersey. 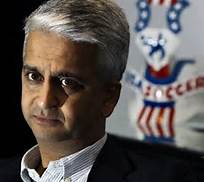 Put on those surprised faces: Sunil Gulati is back for another term as President of U.S. Soccer after winning a unanimous vote.

Michael Bradley and Tim Ream are both saying "no thank you" to the uncertainty of the U.S.-Ukraine Friendly, something we wish Dempsey could do right about now.

Another Union story, this one from World Footballers Union declaring that they will take legal action against the transfer system.

Brazil continues to be unprepared for the World Cup, now only 100 days away. The venue for the opening game is significantly behind schedule, forcing builders to aim for "operational".

Seemingly attempting to get in Vince McMahon's good graces, Newcastle manager Alan Pardew headbutted a player in their recent game against Hull City. He was fined 100,000 dollars by the club. Expect those sorts of fines to go away once Vince takes control.

After not paying its players, including recent signing/drama queen Camilo, Mexico's Quaretaro are facing some very serious consequences. (Perhaps Camilo should have stayed in Vancouver?)

Trinidad and Tobago striker Kevon Carter collapsed and died during a training session.

Sounders season 40 starts in five days, folks. Today is a good day to Let it Go.