With only 60% of last year's minutes returning the depth chart is a bit different than last year. Preseason even sorted out a few of the questions and raised the possibility of others.

Looking back just a year ago and comparing to the 2014 version of the depth chart the change is readily apparent. On a healthy and fit starting XI seven players were not with the club for First Kick 2013. One is slipping to a new role.

Entering preseason there were questions about who would start at left mid. The acquisition of Marco Pappa answered that. His performance after joining the squad indicate that he will be a key player this year. Another question was which keeper would win that contest. Stefan Frei seems to have edged out Marcus Hahnemann.

The competition for starting centerback is tighter. Djimi Traore had a minor injury that held him out of some of preseason. Jalil Anibaba also played quite a bit at right back, most of that was due to the absence of Yedlin early in camp. Currently I'm about 60% sure that Anibaba gets more starts at CB than Traore (barring injuries).

Overall the roster is younger and yet more experienced in MLS than any previous edition of Sounders FC. There is a reason for the confidence in trophies this season. The emergence of Remick and Okoli as talented youngsters that can change games amplifies a deep squad with seasoned vets as the most likely backup at most positions.

A pure second team is stacked with speed on the left side while the pure First XI has it scattered in all sections of the pitch. 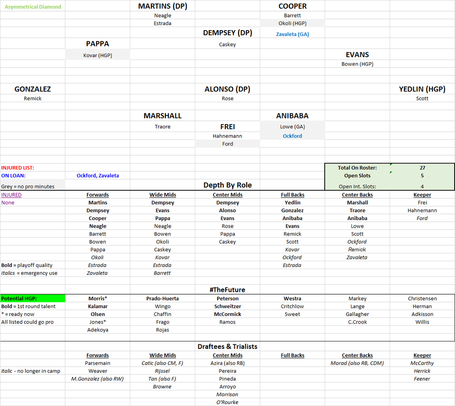 * a key was added to each section as well as notation of DP, HGP and GA players.

There are several things that can change the top two sections. With so many roster spots open a few trialists are likely to be signed. Cubero could sign any day, or not at all.