Robbie will be expected to remain in LA

A certain awesome SB Nation leader and excellent air bass player provided Black and Red United with a scouting report on recent Sounder and constant (Sounder at Heart) Alex Caskey. Unfortunately, BaRU has yet to reciprocate with a look at who the Sounders may pick up with that pick we traded for him. You know, the third pick in the 2016 draft.

Not everyone is exactly enthusiastic about the moves Seattle made in the offseason, but Ives at least seems to have faith that the Sounders will continue to experience success in 2014. World Soccer Talk is perhaps a bit more guarded, wondering whether Clint Dempsey is going to bounce back and play to his ability, and if the Sounders can step off of the chalkboard and onto the field. Seemingly all season previews, including this one from Fox Sports, address the moves Seattle made from the perspective of changing locker room chemistry.

Btw, LEVYfilms picked up field passes today. Hope we can do something special this year. Sleep well on the plane Deuce. You'll be home soon.

Fans of slow-motion sports footage (also known as Every Single Person on the Planet) will be pleased to hear that LEVY will be back at it with the excellent game footage again this season.

The Seattle Reign don't have a monopoly on USWNT contributors. Sounders Women defender Jaelene Hinkle joined the U-23s for a tournament in Spain.

Big, huge look at the season about to charge into our heads.

Robbie Keane is 33 years old, going on 34 this July, but he is still among the most productive strikers in MLS. As such, the LA Galaxy have seen fit to extend his contract (though the length of the extension is yet unknown). Already among the oldest rosters in Major League Soccer, how much longer can the Keane-Donovan duo continue to produce at the level they have for the last three years?

A month ago, the Vancouver Whitecaps looked like a bit of a joke. Now, in the waning hours before the beginning of the season, the 'Caps have flipped expectations on their head. Their latest move to add Chilean midfielder Pedro Morales has gone official. It may not quite make up for the loss of Camilo, but adding prime La Liga talent is never a bad thing. They also traded away Matt Watson to Chicago for an international slot.

Scratch another team off the list: the New York Red Bulls are launching a USL Pro team in 2015. Will it play somewhere within the burrows boroughs?

Even as a member of the original 10, the Colorado Rapids had never taken as many points as they did in the 2013 season. And yet, this season may be the most confusing and unpredictable yet in their existence. Burgundy Wave recaps all the craziness.

Chicago Fire fans DO NOT like their new home jersey, as evidenced by the video of the unveiling party. Knowing their closest friends in MLS, I'm surprised a "You effed up!" chant didn't break out. For a reminder, here's a picture of the chest. Look at the gradiant. LOOK AT IT.

Sports fans in Ontario are getting their first look at what a new, expanded BMO Field might look like in a few years. Changes include a home stand roof as well as significantly increased seating capacity.

DC United is having a hard time finding places to practice in the week leading up to the season; all the fields in the area are buried under a big helping of the white stuff.

Atlanta is looking to the success of yesterday's Mexico-Nigeria as an indicator for what MLS could be for the three-sport town.

Folks who run onto the field of play from the stands are meant to be admonished for their dickishness. Most of the time they are big burly drunk dudes just looking to get their five minutes of fame (or tased, if they are into that sort of thing). Most streakers aren't as stupidly adorable as this little guy who DIDN'T EVEN GO TO JAIL! Seriously, what kind of lesson are they teaching by not putting him in handcuffs and marching him downtown? 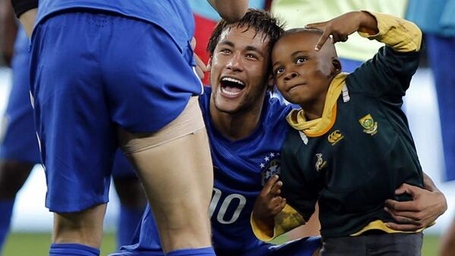 Kid runs onto the pitch after Brazil-South Africa soccer game. But he didn't get in trouble.. http://t.co/2Mz9G7qmSE pic.twitter.com/OGYeF4pZNP

Oh fine, ridiculously cute kid. You win. Argh, it's like he has powers!

Jeremiah gave his look at the USMNT loss in Greece yesterday. Now, see what some other national voices are saying about Dempsey and co. In covering the match and the bizarre circumstances leading up to it, ESPN didn't lose a step.

Finally, meet the 13 year-old boy who didn't waste all his time watching grown men play a game, and instead built a fusion reactor. If you're reading, mom and dad, I'm sorry. I'm so sorry I'm not a fission expert and spend my time watching sports all day.