The Sounders kick off the 2014 season against the 2013 champions, and they look like they haven't aged a day.

Share All sharing options for: Sporting KC Scouting Report: To Beat the Best

There have been MLS champions who snuck into the playoffs, went on a hot streak, found themselves holding an MLS Cup to their and everyone else's surprise, and then went back to being mediocre. The 2010 Colorado Rapids, for example, finished 5th in the West, won the Cup, and then went on to barely make (or miss) the playoffs for three more years without a hint of glory.

Then there were teams that confidently won it, but with a veteran roster that couldn't keep up that form or had to be dismantled. The 2012 Galaxy, for example, lost talisman David Beckham and had to rely on a year older Landon Donovan and Robbie Keane and in 2013 were two points from not making the playoffs, where they bowed out in the first round to Real Salt Lake.

I come bearing bad news for the rest of MLS: Sporting Kansas City is neither of those teams. They weren't lucky winners last season. They dominated both real and statistical rankings for the entire season (and for multiple seasons previous), falling one point short of the Supporters Shield. And they have lost none of their edge. Their core is young and their only significant loss in the offseason was goalkeeper Jimmy Nielsen (who has taken a coaching job to train the next generation in tongue-waggling). But no matter, as they have Andy Gruenebaum — who had the exact same save percentage (75) as Nielsen in 2012, his last full season — and Eric Kronberg, whom they apparently like even more than Gruenebaum.

Given the small amount of player turnover and the fact that Peter Vermes is still in charge, we can be confident that Sporting's style of play will be unchanged. And that style revolves around a relentless commitment to fitness and pressure that will see their opponents hounded out of possession for 90 minutes, and every turnover threatening to spark a stampeding counterattack. That pressure also serves to keep pressure off of their defensive line — which is largely responsible for their giving up less than a goal a game last season — and frees their fullbacks to push up the wings into the attack.

All of which is to say that Seattle isn't getting cut any slack on First Kick. In a season in which the team is under intense pressure to outperform their already consistently good results, they start off with what could be their toughest home match of the year.

Here's the average position map for Sporting in the MLS Cup final match in December. The lack of roster turnover means a map from last season is actually useful, but there are some caveats. Holding mid Oriol Rosell left the game injured in the 9th minute after only 4 touches, which is why he's located in such an odd place. He was replaced by Lawrence Olum who occupied Rosell's usual position in the defensive middle of Sporting's 4-3-3. 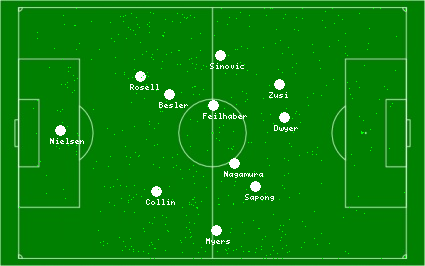 With so much support from the midfield trio of Rosell, Paulo Nagamura, and Benny Feilhaber, both fullbacks are eager to get up the sideline and provide crosses into the attacking three. Besides Zusi, the members of that attacking band aren't really set. The team dealt away Teal Bunbury in the offseason, leaving CJ Sapong and Claudio Bieler as the likely starters. But there's also lower league revelation Dom Dwyer, Soony Saad, and Sal Zizzo, who the team acquired from Portland just after the season ended. With Sapong apparently still nursing an injury I'd guess the front line to be Bieler in the middle and Zusi and Zizzo on the wings. Also, that's fun to say.

For the Sounders, there aren't many lineup questions coming out of preseason. If Leo Gonzalez is still carrying an injury he might be left off in favor of Dylan Remick. And Clint Dempsey almost certainly won't start after going the full 90 in two matches this week in two different countries and then flying back to Seattle. But that's not a lineup shift, since they've played without him all preseason, and it's likely Marco Pappa will once again slot into the attacking midfield role with Lamar Neagle to the left, Brad Evans on the right, and Osvaldo Alonso behind cleaning out attacks.

This may be a game for Neagle to shine. If they can catch Chance Myers pushed up too far he can attack the space behind him, either getting free attacking room or forcing Collin to shift out to cover him, opening up space for Pappa, Obafemi Martins, and Kenny Cooper.

At the other end the key will be holding the ball under pressure and not giving up too many counterattacks. Alonso's ability to pass in tight spaces will be critical, but much will come down to whether Evans can match him and avoid coughing the ball up to Zusi and Feilhaber. If Sapong indeed isn't playing that also gives Seattle some relief in the air. Gone are the days when Kei Kamara, Bunbury, and Sapong would dominate the air and combine for 100 headed shots a year. Collin is still a danger on set pieces (as he was in the Cup final), but otherwise most of the danger should come on the ground.

Much hangs in the balance in this game. There's an air of disgruntlement hung over from the collapse at the end of last season, and starting off the year with a home loss would could quickly sour the mood. On the other hand, a win or even a draw in our only meeting this year with the defending champions — without our best player integrated into the squad — would give us an early leg up in a tough playoff race in the West.