For everyone who loves graphs.

What does the release of 2014 salary information tell us about the continuing growth of Major League Soccer and its growth in this early season? For those readers who are less than fond of scanning tables embedded in the Players Union pdf, we offer some context. 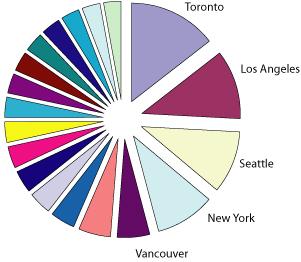 The top 5 teams in total guaranteed compensation presently account for slightly over half the money payed out to the players in Major League Soccer. This is not uncommon for the recent years of the league, due to the large amount of money paid to a few individuals. Of the 555 players listed, 12 (2.16%) will earn more than a million dollars this season, and those 12 play for only 6 different teams. How does this disparity between the few and the 98% compare to the recent and distant past? 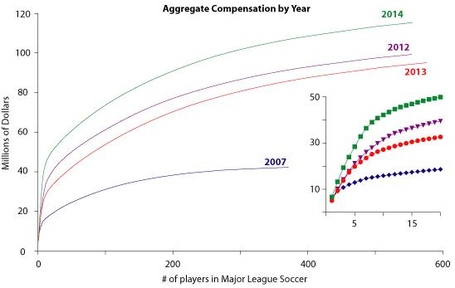 This graph depicts the aggregate salary of all players in Major League Soccer, added together in descending order of individual compensation. The inset graph shows the increase due to individual players among the top 20 compensated players. In each of the 4 depicted seasons, the top 20 players take in between a third to a half of the total money paid out by the league. However, the steeper slope of the line in recent years, particularly 2014, in players 100-300 and on certainly demonstrates that non-marquee players have benefited from the growth of the league. 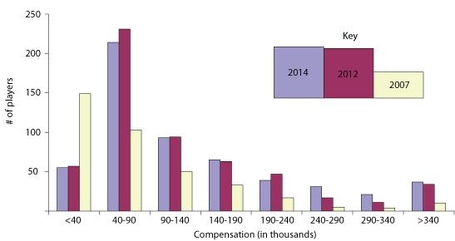 The more conventional histogram illustrates a similar point. The promising development of 2014, in comparison to 2012 and 2013, is that the league has not only increased its DP and near-DP level compensation, but also significantly increased the number of players receiving $240K-$340K. If the money is spent wisely, this must help MLS compete for a higher level of talent than has previously entered the league and offset any potential dilution of talent brought about by expansion.

The diminishing median salary of some high-spending teams is a peculiar feature of the 2014 data, and may represent some demands of cap pressure to seek low-salary reserves when carrying 3 Designated Players. However...

...MLS teams have not discovered any method to turn guaranteed compensation into guaranteed results on the field. This remains a high-parity league, and "difference-makers" appear at both the high end and the low end of the salary scale. Miserly teams certainly run an elevated risk of failure, but smart spending can still beat out the wealthy. I hope that remains the case as the league continues to grow.