Deuce and Oba score high again, but readers less happy with many other starters.

There seems to be general agreement that, with the exception of strikers Clint Dempsey and Obafemi Martins, the Sounders were not great in the 3-2 come-from-behind victory at FC Dallas last weekend. More than 770 readers submitted ratings as of 6 p.m. Tuesday and Martins and Dempsey were by far the highest rated, with Martins receiving a 7.23 average rating and Dempsey an 8.61 for a performance that earned him his second straight MLS Player of the Week award. Most of the other players received scored somewhere between 4.50 and 6.

With me travelling to Frisco from my Austin home for this week’s game, Jeremiah Oshan took over the ratings for the week. Jeremiah, if you don’t know, is not only manager of Sounder at Heart, but SB Nation’s MLS blog manager, the Sounders beat writer for MLSsoccer.com, and a host of the Nos Audietis podcast. He is further inside this team than any of the rest of us who contributed a rating and I have a ton of respect for his eye for the game and for this team. Still, readers differed from Jeremiah’s ratings quite a bit on some players, especially on those who he was most critical, with a the community scoring DeAndre Yedlin, Gonzalo Pineda, Lamar Neagle and Kenny Cooper more than a full point higher than Jeremiah. That’s a pretty similar result to my harshest ratings last week and I think it will eventually lead to some interesting discussions in the community. Do we expect too little of Sounders FC players because they are "ours"? Are we reluctant to score them poorly because we are supporters? Or is it possibly the opposite – that we expect much more out of our players than they realistically are capable of? I will do more work on ratings trends when we get further into the season, but I’d be interested to read your thoughts below.

DeAndre Yedlin: 4.53 (3) +1.53 Either score you look at here, people were clearly disappointed in DeAndre’s play in this game. I don’t think it was just the obvious and uncalled-for push that led to a penalty. DeAndre has struggled at times this year closing down his mark and keeping them from getting off a forward-moving pass or cross. He brings so much to the table, including amazing closing speed that helps make up for mistakes. But we all hope there are fewer and fewer mistakes to make up for as the season rolls on.

Chad Marshall: 6.82 (8) -1.18 I mentioned earlier this year that I think Chad is going to be hard to rate. He is just so solidly consistent. He makes few mistakes, wins 99 percent of the balls in the air that come his way, cleans up for the other defenders often, and is a real threat on the offensive end. I think both the 8 and the near-7 ratings here are both defensible. I suspect Chad’s ratings will be somewhere in this range nearly every game, barring some out-of-character mistake.

Gonzalo Pineda: 5.41 (4) +1.41 Watching the game in person I had a palpable sense that Gonzalo and Ozzie have not played together enough. One of the most notable issues was the fact that they often both moved far forward at the same time. When Ozzie is paired with Brad Evans in the middle, Ozzie tends to play further back and Brad makes a lot of the forward runs. Working next to a more defensive-minded midfielder, Ozzie has been moving forward more, but Gonzalo has not stayed back to cover as Brad would do in those situations. Gonzalo and Ozzie simply can’t both move so far up field and leave the defense undermanned. That’s especially true when the manager chooses two forwards with limited defensive ability in Neagle and Cooper, and when Yedlin is depended on to move forward so regularly. There just aren’t enough bodies in defense, and the space between the defensive line and the midfielders is too deep with both Ozzie and Gonzalo pushing forward. I suspect this fact was a large part of the conversation at the half in Frisco. Both players seemed to sit further back in the second half and the team defending improved. I think it’s possible that Gonzalo will continue to start when Brad returns, with Brad a better two-way choice on the wings than Neagle or Cooper. But Gonzalo won’t hold on to a starting position if this problem continues to surface, despite his obvious skills in passing and ball control.

Lamar Neagle: 4.80 (3) +1.80 A lot of the discussion with Jeremiah’s ratings centered on Lamar and his occasional poor performance. We just started ratings on Sounder at Heart this year, but I believe if we had done them last year we would find high ratings when he plays striker and much lower ratings when he is on the outside of the midfield. This week’s performance was one of those frustrating ones. And you could tell Lamar was frustrated as well. I believe the referee did the Sounders a significant favor when he did not give Lamar a second yellow card in the first half on a tackle that was clearly card-worthy. Those two very poor tackles are partly behind the discussion this week, but really only partly. The other part is just how little impact he has on a game from a wing position. But remember, we are only 10 days removed from a substitute performance for Lamar in which he completely changed the game from the right wing and helped lead the Sounders comeback in Portland.

Clint Dempsey: 8.61 (9) -0.39 Many, many people gave Clint a 10 again this week. He was marvelous. Just fantastic. He seems to be exactly what was promised when Sounders FC brought him in last year and made him the highest-paid player in MLS. It was doubly fantastic to watch this game live in Dallas, surrounded by big groups of Texans wearing Sounders Dempsey jerseys. He seemed to be genuinely happy playing in this game and showing off in front of his friends and family.

Marco Pappa (68th minute): 6.22 (7) -0.78 Are we, as a community, over the horrible mistakes Marco made against Toronto? I would hope so, and this rating seems to show that the community is ready to put the past behind them and reward Marco when he performs well, which he did this week. He’s still a little slow in the decision-making at times, and that can lead to unnecessary turnovers. But his passing and ball control are top-notch. He can make a real difference in the game and for more than just 22 minutes. For your discussion, I’d suggest a midfield of Pappa, Alonso, Pineda and Evans. It would be a sacrifice of speed in attack for an increase of skill. Thoughts?

And from Sidereal, a graphic look at the ratings ... 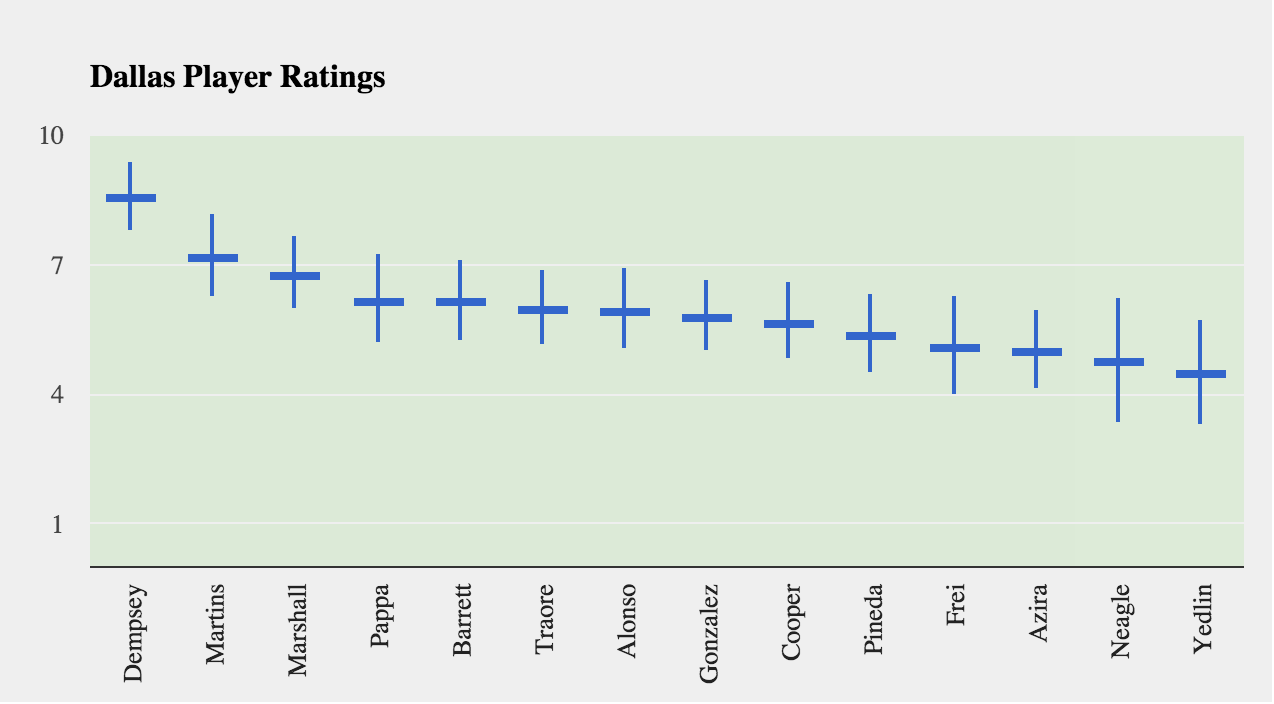