The Sounders complete their long road trip against an intriguing - but not very good - Chivas team.

Chivas USA has been through a real roller-coaster ride through the last few seasons. I don't mean their results, unless you think a bumper car slamming into a wall, flipping over, and bursting into flames counts as a roller coaster. But the perception of the team by most MLS neutrals has wildly swung from The League's Greatest Mistake to Team Racism to Plucky Underdogs in just a couple of seasons. It helps that when they fail, they fail big. Sure, any DC United can just be bad for season after season. That's boring. Chivas hires El Chelis, then fires him a month later, then adds an ethnicity test to their Academy, stars on 60 Minutes, then sells the club back to the league, and then — presumably — drops the mic. Also, Cubo Torres does the robot when he scores. Also, they have a player named Bofo.

For Sounders fans, there's a particular affinity. Mauro Rosales, one the greatest character guys in the team's history, moved to Chivas when Seattle needed his DP slot for Osvaldo Alonso. And Chivas kindly took on the Eriq Zavaleta project when the Sounders couldn't find a place (or a position) for him. Now he's getting regular first team minutes in the first division and learning an MLS position, none of which was going to happen with Seattle.

But back to what happens on the field, are they any good? The answer is, once again, not really:

Last week Seattle faced the team with the fewest shots per game in the league, though it ended up being a contest thanks to two very derpy Dallas goals. Now they face the team with the second fewest shots in the league. That's not usually a recipe for success. You can see from the possession and pass numbers that Chivas is just not a team that has the ball a lot (which make it all the more amazing that they out-possessed Porterball in Portland last week). That's fine if you're a good counter-attacking team or if you can be dangerous on set pieces, but Chivas is really neither. They don't have the speed or the quick transition passing to get to teams on the counter and they have what's probably one of the smallest attacking groups in the league, which is unlikely to do much damage on headers in the box.

In defense, they'll be without the services of Zavaleta, who won't play against his parent club. Fortunately for them, they'll be getting Bobby Burling back from injury for a like-for-like swap that's almost certainly an upgrade next to Carlos Bocanegra. And I'd expect Andrew Jean-Baptiste, usually a center back, to start again at left back after looking like the man of the match against his former club last week, opposite Eric Avila on the right. That back line is protected by Argentine defensive midfielder Augustin Pelletieri, who thus far has chosen to protect it by fouling the hell out of his opponents and picking up cards, including a red in the 13th minute against Vancouver. I'd expect Pelletieri to have the primary responsibility on Clint Dempsey when he drops into midfield, so much may rest on how much hacking he can get away with.

In the attacking midfield they've been playing the valiantly beaver-tailed Thomas McNamara, but he unfortunately suffered a knee injury in the last match. Alicia of the Goat Parade predicts he'll be replaced by Homegrown Player Marco Delgado and I'll take her word for it. If they continue to play a 4-2-3-1 as they did in Portland, that attacking midfield role is critical, and playing a very young player with 1 career assist in 20 games played seems a gamble, but Chivas is in gamble territory these days.

Chivas' playmakers are really on the wings. Rosales is on the right and Argentine Leandro Barrera is on the left and combined they have 5 of the team's 8 assists, mostly to Torres, who has 5 of the team's 7 goals (though 2 are penalties).

So the key to stopping Chivas is stopping the service to Torres from the wings. Leo Gonzalez seems a near perfect foil to Rosales on the left. Mau doesn't have the speed to get by Leo, so Gonzalez has a chance to man-mark him out of the match. With Brad Evans back on the field, he can combine with DeAndre Yedlin (who will no doubt be eager to recover from an awful game in Dallas) to shut down Barrera. That will leave Osvaldo Alonso to clean up any buildup in the center and that will leave Torres completely on an island to face double teams from Chad Marshall and Djimi Traore. 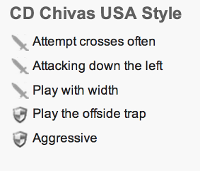 If the Alonso/Delgado matchup does happen in the middle, that's a potential font of counterattacks from Seattle. I'd expect Alonso to be able to harry the young midfielder all game, producing a good number of turnovers. The real question for Seattle is who the ball would go to in that attack. Obafemi Martins and Dempsey are givens, but the two wing players will be some combination of Marco Pappa, Kenny Cooper, and Lamar Neagle. Pappa has looked very good in substitute appearances after his howler against Toronto, and this may be a good matchup to ease him back into the starting rotation. On a lark, I'll guess the pair as Pappa and Cooper, with Neagle the first player off the bench.

This matchup strongly favors Seattle. Balls bounce funny (as Frei well knows) and you can never take a road game for granted, but every matchup here looks good for the Sounders. Especially Martins and Dempsey against their defense. Bocanegra is a fine player, but he can't shut them both down himself. Burling is a house, perfectly shaped to dominate balls in the air, but that's not how Seattle plays anymore. Pelletieri defends by fouling until he can't get away with it anymore, but that's just another opportunity to get Pappa or Dempsey on a dead ball.

Recent Sounders history suggests this game will feature goals galore. And I can certainly see the argument for some Sounders scoring. After all, Chivas hasn't had a shutout all season. But given the one-dimensionality of the Goats' attack, this seems a much more likely game for the Seattle defense to finally settle down and shut an opponent out.