Please take every link for the grain of salt that it is considering yesterday's designation -- hopefully everything in here is true.

Everyone thought Sigi Schmid was everything but happy with the final result of the Colombus Crew win on Saturday, especially considering the nature of the how the game played out in the final minutes. Video caught Schmid having an animated chat with Chad Marshall, but according to Joshua Mayers, it turns out that Schmid just wanted to know what was going on.

Columbus Crew goalkeeper Steve Clark is the at the top Castrol Index ratings after his five save performance against the Sounders. Seattle was shut out of the top-10 with Osvaldo Alonso coming in highest at No. 12. Speaking of more Crew news, Columbus moved up five spots to No. 2 in the latest MLS power rankings. The Sounders dropped six spots to No. 7 because of the loss.

With Cascadia emotions running high this week, ex-Sounder (blargh) Steve Zakuani will be avoiding the press, according to Don Ruiz. Ruiz said the Portland Timbers have informed the Sounders media that Zakuani will not be available for comment. His status for the game is up in the air because of a hamstring injury.

RSL Soapbox had a couple of prank worthy April Fool's joke, although the re-branding of the club name does make quite a bit of sense. Definitely the winner out of all MLS clubs for jokes on Tuesday was the Colorado Rapids' announcement that the team would wear the official Caribous of Colorado uniforms, last seen in 1978. 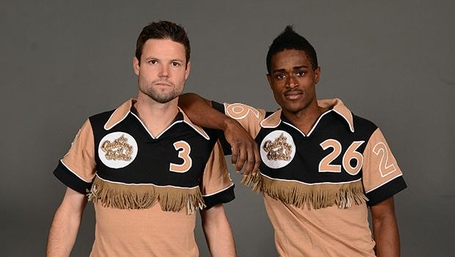 The voting is opening until midnight on Wednesday for the Player of the Month in March. Michael Bradley, Will Bruin, Mauro Diaz, Frederico Higuain and Nick Rimando are the five non-Sounders to choose from.

The USMNT revealed the latest national team away kit for 2014, and it is being met with mixed reviews on social media. Some people, like Mr. Levi Pack enjoy the simplistic design. Others, like Mr. Kevin are less impressed.

Really want the new away kit for the USMNT.

Potential USMNT future savior and all around hyped youngster Julian Green will most likely make his debut on Wednesday. Jurgen Klinsman was quick to remind everyone of what Green will bring to the table this year, saying he is a player to be developed.

Games between the U.S. and Mexico are always heated and it doesn't get any easier for Klinsman and his fluid back line rotation. Brad Evans, of course, is injured, and DaMarcus Beasley and Michael Orozco weren't released by their Mexican club Puebla because the Wednesday match doesn't fall on a FIFA fixture date. The stage is set for DeAndre Yedlin to see some solid time at right back, thanks to a bit of unsportsmanlike conduct on the Mexican side.

The relationship, or lack thereof, between Chelsea and Dutch club Vitesse keeps on taking some bizarre turns. This one is pretty special after former owner Merab Jordania claimed Chelsea intentionally prevented Vitesse from winning the league. He also threatened to cut off the fingers of Vitesse's CEO, so there is that as well.

Real Madrid midfielder Sami Kehdira is set to return from a knee injury soon. The German tore ligaments back in November and still isn't fully training, but he is looking to be completely ready for the World Cup.

The Independent had a rather excellent April Fool's headline (or possibly real headline).

Norwich City players will reimburse traveling fans after a 3-0 defeat to Swansea on Saturday. Close to 900 fans make the trek to support their squad in the stadium furthest from home, as Norwich City fell completely flat in the match.

I actually clipped this link legitimately, then actually read it. Still, a rather clever prank.

Edison Cavani didn't come to PSG cheaply and it might be a short lived union. The Uruguayan player had to adapt his style of play when he joined a team that lines up in a 4-3-3 formation. Cavani minced words, but suggested he wouldn't be opposed to changing venues this upcoming summer.

ESPN released a new World Cup commercial. It is quite good.