The number of people taking part in the Sounder at Heart community player ratings rose this week, with 539 votes submitted as of 7 p.m. Tuesday night. The ratings were fairly positive, despite the heartbreaking 2-1 loss. That is likely fed by a feeling that the team was hurt by questionable refereeing on both of Columbus' goals. It's worth noting that Djimi Traore was the only player who finished below the 5 "adequate" rating, a reflection on his questionable choices that led to the red card, penalty kick and first goal for Columbus.

Here's a look at this week's community ratings. Reader scores follow the player's name, followed by my ratings in parenthesis and then the difference between those two numbers in italics.

Chad Marshall: 6.83 (6) +0.83 I have the feeling that rating Marshall is going to be relatively difficult throughout the season. It is hard to find bad things about his performances and perhaps one becomes overly used to his strong performances. Frankly it would be surprising to see him lose a contested header in the defensive end at this point. As I have explained in previous ratings stories, I sit and watch the game with a notebook, jotting down notes and especially marking when someone does something beyond what I would expect someone in their position to do. My notes gave Marshall a plus-7 against Toronto, plus-6 against Montreal and plus-4 against Columbus. That explains why I ended up with him at "good" this week, but not "great." Still I completely understand why the community went higher.

Djimi Traore: 4.47 (5) -0.53 I will admit that I teetered between a 4 and 5 for Djimi when I did my ratings. In the end I guess I went with the conclusion that the red card was overly harsh and that despite the obvious contact, referees regularly ignore much harder fouls in the box. I prefer to stick to a straight 1-10 scale as I feel there are a lot of options in there that cover most realities in a game. But honestly I think 4.5 is likely more accurate in this case- somewhere between a flawed performance and an adequate one. I think it's telling that is where the community ended up. There is a lot of good and bad potential with community ratings. They are certainly not scientific and can be heavily influenced by emotions - both from actions during the game and from how we feel about players outside of what happened in a game. But I have faith in the Sounder at Heart community. This very accurate and fair rating from the community reinforces that faith.

Gonzalo Pineda: 6.73 (7) -0.27 I am slightly surprised that both Alonso and Pineda finished below the scores I gave them. To me those two players were the best on the field for the Sounders on Saturday - Alonso for his dogged tackling and his incredibly accurate and productive passing and Pineda for his constant activity, good positioning and passing and a couple of nice free kicks. It's worth noting that Alonso had the highest rating of the week from the community and Pineda the fourth-highest behind Alonso, Cooper and Marshall.

Obafemi Martins: 6.66 (6) +0.66 Both Martins and Cooper got near to 7 in community rating this week; Cooper's score likely due to a well-taken goal, Martins for a lot of work up front. Neagle, on the other hand, was judged by the community to be below the 6 I gave him. From the comments on the voting thread I would say that some people were especially frustrated with the shot Neagle took from just outside the 18 yard box that was tipped over. Some people suggested he should have chosen to pass to Martins on that play to perhaps set up a higher-percentage chance on the goal.

A graphic look at the ratings. The horizontal lines are at the median of each player's ratings from readers. The lines above and below will extend to the 75 and 25th percentiles respectively, though the ratings are clustered enough that it would be rare for both to differ from the median. In theory, a player with very high variance would have longer lines. 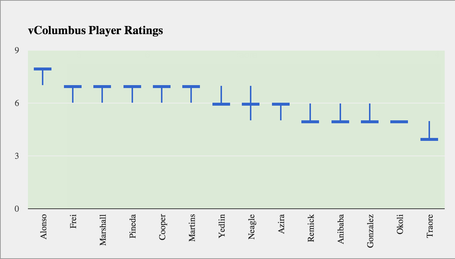