Seattle is now 2nd in the West and 2nd overall after seven games played. Here's a recap of what happened on the pitch in week seven. This is the bare minimum you need to know. If you have MLS Live you should know which matches to watch during the week.

Week seven action saw 22 goals in ten games with six shutouts. Seven red cards were shown this week. There's an interesting thing happening as relates to the division between the Haves and the Have-Notes. Unlike most leagues in the world the Haves do not dominate the standings (it is early), but what they do is play more effectively.

Here are the Western Conference playoff teams from MLSSoccer.com/Standings which includes the new tie-breakers.

New York Red Bulls v Philadelphia Union - two match weeks are starting and the Union go first. The also were the first team to lose (2-1) to New York. Hooray for firsts! Henry netted goal one. But the real takeaway in this game is that Red Bull's wide mids are pretty good. Sam scored off an Alexander assist. Only 4% of their passes are crosses, so it's a fun type of flank action. Le Toux scored a PK to take an early lead in the FSoW.

Philadelphia Union v Houston Dynamo - Nil-Nil draws aren't always boring, but when the Union it probably will be. Philly managed zero shots on target. A two game week nets the Union a single point. Sarkodie got a 2nd yellow for time wasting. Some think this is cruel, but he could have just thrown the ball in and not get carded again. The game continued for 15 minutes with Philly up a man. I say again "zero shots on target."

Chicago Fire v New England Revolution - Revs pressure early. That's pretty cool, but it also leaves openings for speedsters like Amarikwa to get behind for Chicago's first. Fire give up the tying goal when Nyarko takes out Alston in the box (also why is Nyarko there?). Nguyen nails the PK. A lot of this game was played 10v11 (Amarikwa earned his 2nd, but his 1st yellow was baffling) and then 10v10 when Anangono wasted a penalty that should have burned down Bridgeview. Draw City East 1-1. Still winless.

Colorado Rapids v San Jose Earthquakes - Do you like long balls and long shots? If so watch this. If not just know that there was only a single shot on target and only 15 total attempts. If you worship at the altar of punt & pray sometimes those prayers don't come true. 0-0.

Vancouver Whitecaps v LA Galaxy - You're just kind of watching and the Galaxy are doing their thing. Getting a goal from Ishizaki (he's Swedish you know). It's looking like they'll get a nice road win. Then halftime happens. Robinson busts out the double-tactical substitution. Twenty minutes later he uses his third. The Game Changes. Mattocks draws the 'Caps level. Keane puts LA up again, but it wasn't going to last. Manneh gets YVR a home point with the 2-2 result.

Columbus Crew v D.C. United - EJ didn't score. He did get taken out in what should have been and clearly was a red card/penalty. The referee crew refused to answer questions about this call. Columbus is fun to watch as long as you ignore Gonzalez. He keeps getting away with stuff that is just plain wrong. Espindola netted DC a goal and it looked like a road win. Then in the 90th minute while down a man Jiminez draw the Crew level at 1-1. From now on just watch the last five minutes of Columbus games.

Sporting Kansas City v Montreal Impact - Montreal didn't show up, why should you? That's harsh but not as harsh as the 4-0 score in KC's favor. Sure, it only started with an own goal (Mallace), but Collin and Dwyer and Dwyer done piled on.

FC Dallas v Toronto FC - It took TFC 60 days to sign former J-League, S-League, Danish 1st Division, and A-League player Nakajima-Farran. He scored his 2nd goal to take the early lead against the league leaders. The Reds forgot something about the new Toros. They love the dead ball. Hedges scored with his head. Perez scored with his foot. Dallas won 2-1 because they just kill you with set-pieces. If they meld that with Pareja's system they could just take the Shield.

Real Salt Lake v Portland Timbers - Draw City did not draw. They also did not win. Rimando is amazing - just flat amazing. He won that game for RSL, well he and Grabavoy. RSL 1-0. This image from WhoScored sheds some insight. Porterball's 16% longballs hit sheds some more. 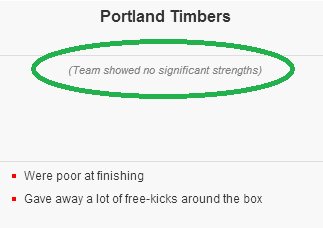 Former Sounder of the Week

To the teams that still don't have a win, we pity you. There is pity in Seattle, you deserve some.