Fans continue to back dynamic duo of Dempsey and Martins.

With more than 560 ratings submitted, no Sounder finished lower than 5.41, which is halfway between adequate and good on the ratings scale. The community ratings were generally higher than those posted by me on Sunday, with only Gonzalo Pineda and Marco Pappa receiving (slightly) lower scores from the community, on average, than the 6 that I gave them.

Looking through the numbers there were some interesting swings. Some of those who submitted rated the entire slate of players much higher, with Clint Dempsey and Obafemi Martins even receiving a smattering of perfect 10s. Other were a bit harsher, punishing players they felt didn’t contribute enough. On average, though, it seems like the Sounder at Heart community agreed with my basic notion that this a win was good, and no one was below adequate in their performance, but that they would like to see a more consistent performance before they hand out a "great" 8 or more..

DeAndre Yedlin: 5.41 (5) +0.41 Those of you who read through the comments know I took the biggest heat of the season for the 5 I gave DeAndre for this game, particularly from one community member who felt the rating was too low and showed a lack of expertise on my part. I think chief among the complaints was my comment that DeAndre may need to cut down on going forward as often when his teammates are turning over the ball as much as they did against CUSA. To me the most interesting part of that discussion was when site editor Dave Clark mentioned how many different people within the Sounders organization have told him that DeAndre is supposed to go forward a lot, that his teammates all know that, and that other players are specifically told to be ready to cover for those runs. It’s a debatable tactic, and one debated in our comment thread, but I can understand why it’s part of this squad. It plays to DeAndre’s strengths. Jeremiah wrote a good piece on the topic for mlssoccer.com yesterday. Read that here. Also, to be clear, I don’t think there is anything wrong with a 5 in this rating system. I don’t consider it an indictment in any way. I suspect at the end of the year most of my ratings will be in the 5-6 range and I imagine most community ratings will be similar.

Gonzalo Pineda: 5.73 (6) -0.27 My scores for Pineda are regularly higher than the community’s scores, even if only a little bit like this week. Since his first performance I have pegged Gonzalo as a real asset for this team and as he rounds more into form, I expect that to prove even more true. As long as he and Ozzie continue to cover together comfortably, as they did against Chivas, I suspect he will remain in the lineup. It will be interesting to see how much time, if any, he loses to a healthy Brad Evans. My personal suspicion is that Gonzalo will continue earning many minutes next to Alonso, giving Brad more free reign as an outside midfielder.

Marco Pappa: 5.82 (6) -0.18 Someone stated in Sunday’s comments that ratings are obviously opinions and two people can see the same thing and come up with very different points of view. That was born out in the comments thread when one person commented that they thought Marco was "one of the best players on the pitch" and another said "am I the only one who thinks Pappa is a total loss at this point?" That’s the nature of these ratings, folks. The good news is hundreds of people take part every week and it sort of evens things out.

Clint Dempsey: 7.53 (6) +1.53 Deuce’s rating is the biggest difference between my ratings and the community this week. I looked through my notes again and still think the number of truly impactful things Clint did was down quite a bit from the Portland and Dallas games, in which I scored him with a 9 and 8 respectively. I’m trying to be consistent week in and week out and stick by my system even when my gut tells me something different. That was the case this week. I "felt" like Clint deserved a 7, but the notes in my notebook didn’t seem to back that up. Glad to see that the community corrected me on this. A 7 for the captain in that game is fine by me.

Obafemi Martins: 7.61 (7) +0.61 I was glad to see that Oba received the highest marks from the community for this game. I faced a bit of criticism for choosing him man of the match, but I stick by that. Strikers are different kinds of animals and different things are expected of them in my book. I have watched Oba play for many years, in Italy and at Newcastle in England. He is a guy who creates pressure, makes good decisions in high-pressure, in-the-box situations and finishes often when set up by a teammate. I’m not a huge stat guy when it comes to soccer. So much goes on that people have a hard time measuring. But when it comes to strikers it has to come down to goals and assists. Oba appears to be in fine form in that sense and it is helping this squad win games.

And from Sidereal, a graphic look at the ratings. The horizontal lines are at the mean of each player's ratings from readers. The lines above and below will extend one standard deviation in either direction. 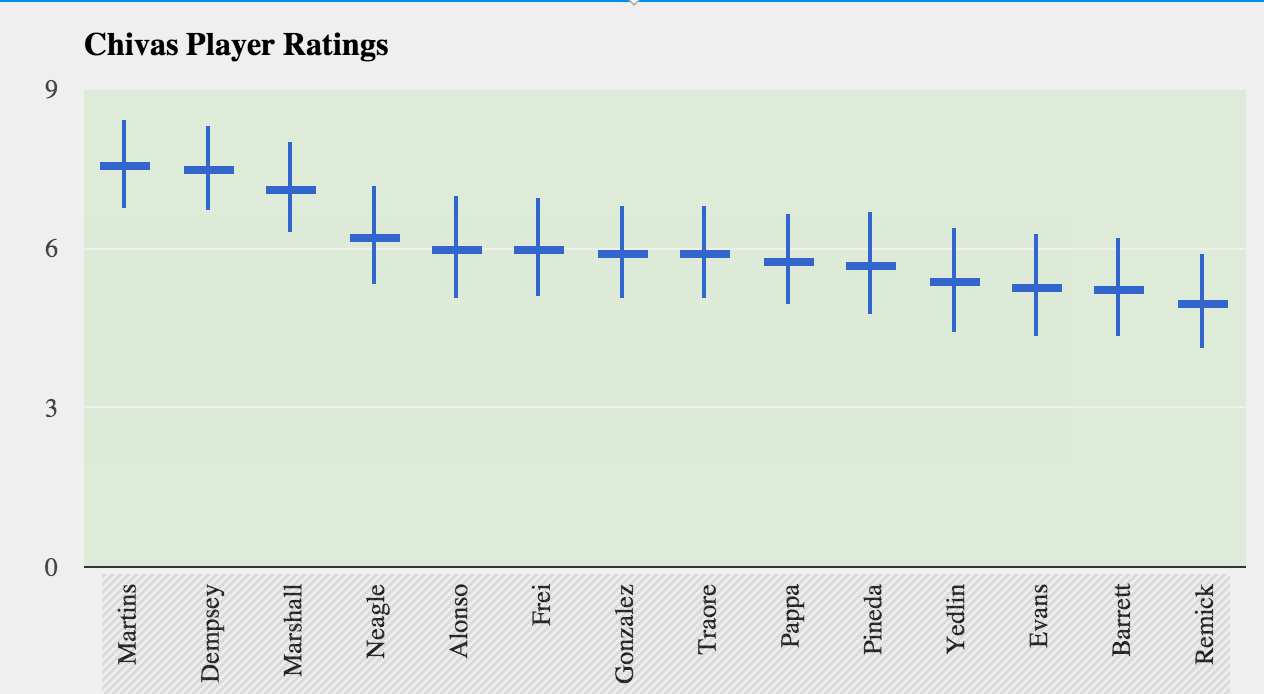