An attacker is zipping in towards the goal from the left side, coming right across the corner of the penalty area. A defender lunges towards the ball, feet up off the ground a bit, and makes contact with the attacker from the side/rear. The referee blows his whistle... what's the call?

Share All sharing options for: Adventures in Refereeing- Discernment vs Discretion (pt 1)

One of the very first things that referees need to be able to do is to discern when contact happens.  It sounds simple, but at full speed with a flat angle, it can be considerably more difficult than it sounds to simply see whether contact was even there to begin with.

The Laws Of The Game (LOTG) that comprise the rule-set for soccer also give referees a considerable amount of latitude to apply their discretion on whether or not a particular action is worthy of being ignored, called a foul, justifies a caution (signaled by a yellow card) or even justifies being sent off from the game (signified by a red card).

What's more, in the interests of keeping a flowing game going, referees are given discretion to grant "advantage" to a fouled team- meaning they can continue playing and attacking towards the enemy goal.  Compare this to basketball, where a very common (and incredibly annoying) tactic late in the game is for the defending team to foul the offense in order to stop play and force a chance at a turnover, so the defenders can get the ball back.

In a way, it's an attempt at making a refs's life easier to give them this discretion.  A referee can say he saw a play (he discerned the contact) but he didn't think it was worthy of being deemed a foul (he applied his discretion to what he saw).

Of course, when we are talking about pro sports, these plays happen extremely quickly; and there are physical limits to how well the human eyeball (not to mention the brain) can scan and perceive something like this.  We can't always assume that the ref sees things clearly (and heaven knows, we have plenty of examples where they didn't).

When we evaluate calls, then, we have to keep in mind what exactly we're being critical of- if we're to be fair to the guys who have a pretty tough job.

Here's a video of the call in the Chivas game.  (Sadly, there is no good video of the incident in the game I was reffing.)

(Or check it out at http://matchcenter.mlssoccer.com/matchcenter/2014-04-19-chivas-usa-vs-seattle-sounders-fc/details/video/14328)

Now, imagine yourself with a much different viewpoint.  Instead of having a nice HD camera, shooting from an angle above the pitch, on video that can be slowed to slo-mo or even stopped, you're the referee- you're running along (so your eyes are bouncing on each step) and you see that play extremely quickly and the Chivas player goes down and you have to decide what to do.

We've seen this play many times in soccer, and it could probably have gone any number of ways.

The next question is where did it take place- and this is again a question of discernment.  The initial contact appears to be outside of the area, as seen in this screenshot: 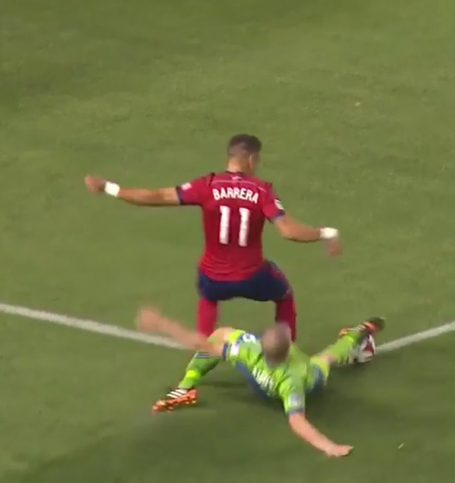 So the ref could have called a foul and a direct free kick from just on the edge of the area.

But the play also zips right into the area, and it's very easy to see how the ref might have thought that the contact (and thus the foul) happened over or across the line marking the edge of the penalty area.  What's more, if the contact- the foul- continues into the penalty area, FIFA's guidance is that it's supposed to be a penalty kick (the actual guidance talks about "giving the most advantage to the fouled team").

So the ref could have called a foul inside of the area and awarded a penalty kick.  However, it appears that the ref decides that the contact is outside of the box, thus, no PK.

What's more, when Alonso is fouling Barrera, it's contact from behind.  When Alonso launches himself at the ball Barrera is actually alongside of him, but as a general rule a tackle from behind can very easily be deemed misconduct.

The nature of the misconduct could be deemed "unsporting behavior" ("UB", which is a catch-all for many fouls or behavior) or even, in a real stretch, "serious foul play" (SFB).  If it's UB, Alonso should be issued a caution, and if it's deemed SFB, Alonso should be sent off.

What's critical here is that this is a matter not of discernment, but of discretion.  The LOTG put the decision for this onto the referee, and while there are official guidelines and advice offered to refs, it's still in their hands.

So to review the possible outcomes of this play:

Depending on what the referee saw (discerned) and what judgement he applies (discretion), any of these combinations could be a potential outcome of this play!

The point here is this: When we are looking at a ref's call, after the fact, it behooves us to keep in mind that refereeing is very tough; that often their view of an incident isn't nearly as good as ours; that they not only have to make that snap decision on whether or not a foul actually ocurred; and finally when it comes to how "bad" the foul was, whether it constitutes misconduct to a point where they need to issue a caution or a sending-off.

This has turned into a long post, so we'll end it there for now- and later we'll pick up the discussion of discretion, and how a referee is allowed to apply it.

Oh, in the under-14 game refereed by yours truly?  Same decision as the pro ref- PK, no card issued... except the team awarded the PK didn't score on it, which made me pretty happy- because as soon as I called it, I was sorry.  The more I thought about it the more I thought it was a bit too harsh for what had actually happened.

(Yes, referees experience regret; more experienced referees take it out back and drown it immediately, while us rookie referees worry about it for a day or so.)