On Saturday the three-match road trip is over. Seattle returns to CenturyLink at 1PM to avenge last Fall's crushing loss to the Rapids and reconfirm the side's home strength.

Last time these two sides met it was a win, in the Playoffs. That's not what people remember though. Unfortunately the regular season game was more notable. When Colorado pummeled Seattle Sounders FC and dropped a nickel up at Dick's Sporting Goods Park it started the end times of 2013.

The Playoff win was a correction, but the next round reconfirmed that bitter taste. Seattle has a very different squad. The Colorado Rapids are slightly different. Most of the players are the same, but they lost their coach and now have MLS legend Pablo Mastroeni in charge. Sounders FC is slightly favored in Saturday's game, but it is not a gimme.

Chris from Burgundy Wave answers Three Questions to help prepare you for another wet day at the CLink.

SaH: The Rapids have a lot of attacking players, but are scoring less than half a goal a game from run-of-play. What's the issue with converting talent to goals this early season?

BW: Nobody is quite sure, which has been the frustrating part of it. The midfield has been fabulous for the Rapids this season and they're getting the forwards into the positions they need to be, but every single forward has seemed half a step off from where they should be. Gabriel Torres hasn't found the shots he found last year, Deshorn Brown hasn't had the tenacity he had last year, etc. It doesn't seem to be something that can easily be fixed; one of the lesser known guys like Charles Eloundou might have to step up and get the team out of its goal-scoring funk. We might see some roster shuffling up top for the Rapids in the next few weeks because of that, as Pablo will need his forwards to start doing a lot more since his switch to a diamond 4-4-2.

SaH: Clint Irwin's return coincided with two shutouts. Is that solely due to his play or are there other changes?

BW: Clint Irwin has certainly had something to do with it. John Berner didn't do a terrible job stepping in for the first three matches of the season, but he doesn't have the presence in the box or goalkeeping intelligence that Irwin possesses. We can't give all of the credit to Irwin for the shutout streak, though. His return also coincided with Shane O'Neill moving from the right back spot to the center spot again, and with the signing of Thomas Piermayr. Piermayr has immediately stepped in and provided very good two-way right back play, better than O'Neill had been providing, on the right side, and O'Neill starting over Marvell Wynne in the center has been predictably an upgrade.

SaH: Shane O'Neill is training down in SoCal with the U-20s. Is he going to play this weekend? What's his ability to slot as a starting level centerback or right back meant to Colorado?

BW: O'Neill was joined by Dillon Serna and Marlon Hairston down in that camp, as well, but none of the three are expected to miss any time against the Sounders. The Rapids have had a few instances this year where players have had to take trips around, including a situation where new signing Thomas Piermayr had to fly from Vancouver to Austria to Toronto in the span of a couple of days and still played 90 minutes against Toronto FC on the weekend. Especially since it looks like the midfield may be weaker than usual against the Sounders with both Dillon Powers and Vicente Sanchez questionable, Pablo might want to put out his best defense possible, which unquestionably includes Shane O'Neill.

As for what he means to the team, he's immensely important, especially at center back. Pablo Mastroeni tried out Marvell Wynne back at CB to start the season, moving O'Neill over to the right, but Wynne once again showed that he's not a top tier MLS CB unless he's got an incredibly stout defensive midfield in front of him to cover up for his positioning. As I said above, O'Neill moving back in after Wynne was suspended was big for the Rapids. He's not fast, but he's incredibly smart and good with positioning the majority of the time, especially for a 20-year-old. It also sounds odd to say, but he adds an interesting dimension to the attack as a center back moreso than he ever does on the right side. He's prone to making 50-60 yard runs up the field from the center of defense, and defending players rarely ever step in to stop him, which gives the Rapids chances to make runs up the field while he trots up. He's already a multi-dimensional player and he'll only get better as he gets older, so we love him in Colorado.

Significant Absences: Brian Mullan (lolol) is the only player I think we can be sure will miss the match. Jose Mari, Vicente Sanchez, Marc Burch, Chris Klute and Dillon Powers are all questionable, but Klute played a full 90 last week and will likely start again with the LB corps being a bit thin.

BW: Clint Dempsey finally started doing Clint Dempsey things in the past two weeks, what clicked for him or the team that has finally turned him into the goalscorer we expected?

SaH: Scoring goals can be kind of random. Plenty of Clint's shots last Fall looked good, but were blocked, saved, or a touch off the mark. Now that the shots or falling in his favor he looks amazing. It isn't just a regression correction though. He's playing a bit higher and a bit wider (on the left of course). Though he didn't spend training camp with Seattle, his time with Fulham did an important thing. It made certain he got to full fitness and trained at a level slightly higher than MLS (only slightly, it's Fulham).

Rather than coming to the league slightly out of shape and getting injured he's now Clint Dempsey. This is what's expected. It isn't just the expectation of MLS fans, but fans of the US National Team. There's little reason to think that he will slump again. The Oba/Clint dynamic is amazing, right up there with Donovan/Keane as the top modern pairing in the USA.

BW: The Sounders have given up more goals than any other Western Conference team currently in the Top 5 despite the addition of Chad Marshall. What's been the issue for the Sounders D? Has Marshall played up to expectations?

SaH: Marshall is amazing. His skills in the air and transitioning to an attack out of the back are at a level beyond normal men. He's surrounded by others that are good to great as well. There are communication issues. Goals are coming either from the gap between the CBs and Alonso or starting out right in the space behind Yedlin. People aren't stepping into those gaps. Anibaba didn't close twice against Portland. A mix of Marshall, Alonso and Pineda are supposed to shift to the right when Yedlin bombs forward. The run-of-play defensive issues really come down to that.

Two PKs. That odd corner by the Crew. Several Goal of the Week nominees. The defense should finish the season as one of the better ones. This year the defensive slump is taking place at the beginning of the season and Seattle is still winning. That feels a lot better than it did in 2013.

BW: What exactly is a Geoduck, and have you ever eaten one? I'd like to know if we have to worry about Shane O'Neill getting some sort of food poisoning before the match. 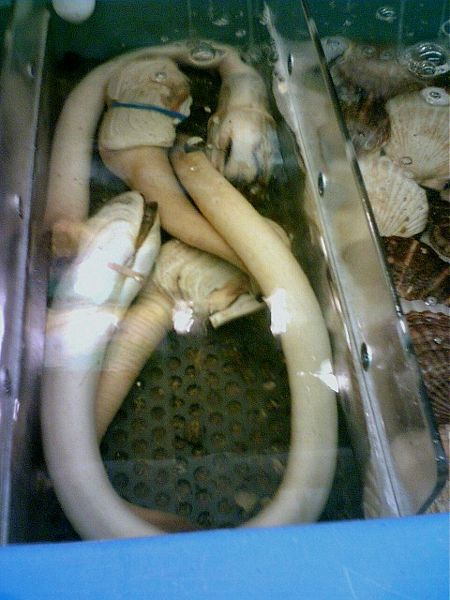 That looks pretty disgusting, but when Top Chef Seattle was here it was one of the proteins a lot of cheftestants wanted to use. It can be prepared to be really delicious, I guess.

Let's go to the tape

Absences: Lowe and Parsemain are on the DL. Evans and Rose are recently back from relatively minor injuries and both should be 90 minutes fit.

Projected lineup: Frei; Gonzalez, Traore, Marshall, Yedlin; Pineda, Alonso; Evans; Dempsey, Martins, Neagle
I should note that Pappa could start over Neagle and I wouldn't be surprised. Evans would then be the RM in a bucket 4-4-2