This week the Sounders pit their high-octane offense (and somewhat derpy defense) against a team that doesn't score or concede many goals. Something has to give.

This weekend's match against Colorado may be an instance of an un-shutoutable force colliding with an unscoreable object. Seattle has been involved in some high scoring games, to the extent that the 25 goals that have been scored in their 7 games is second in the league only to Dallas' 27 (which itself involves the Sounders). On the other hand, Colorado has seen 13 goals in their 6, the lowest goal-per-game rate in the league. And when you consider that 5 of those came in one game against Kansas City, the remaining 8 in 5 makes for a pretty dour spectacle. To scout the team I watched their 0-0 draw with San Jose from last week, and I can tell you confidently that it was very dour. Dooooooooouuuuuuuurrrrrrr.

The question coming into this season was whether the dynamic "RapKids" would be able to maintain their momentum under new head coach Pablo Mastroeni after Oscar Pareja moved on to Dallas. And the answer is 'kind of'. On the strength of a decent defense and incredibly cautious midfield they've gotten good results. That game against KC was their only loss and the only time they've given up more than 1 goal in a match. But their offense has been powered primarily by penalty kicks, which is obviously unsustainable. In fact they've only scored four non-penalty goals all season, two of which were Chara-esque bombs from defensive midfielder Jose Mari when they were up a man against Vancouver.

This will in fact be the third consecutive Sounders game against a team struggling to get shots. We wrote two weeks ago about Dallas' absurd goal rate despite the fact that they had the fewest shots in the league (which they've improved upon since then). And Chivas was in the bottom two in shots per game. And now Colorado is (drumroll...) 18th in shots.

Some of that lack of punch has to be coming from their timidity at home. See this screenshot of a moment early in their game against San Jose. Note that this is a home game against one of the worst teams in the league. Vicente Sanchez, their best playmaker, has moved into the attack and he's stuck because he literally has nobody in the offensive half to pass to. 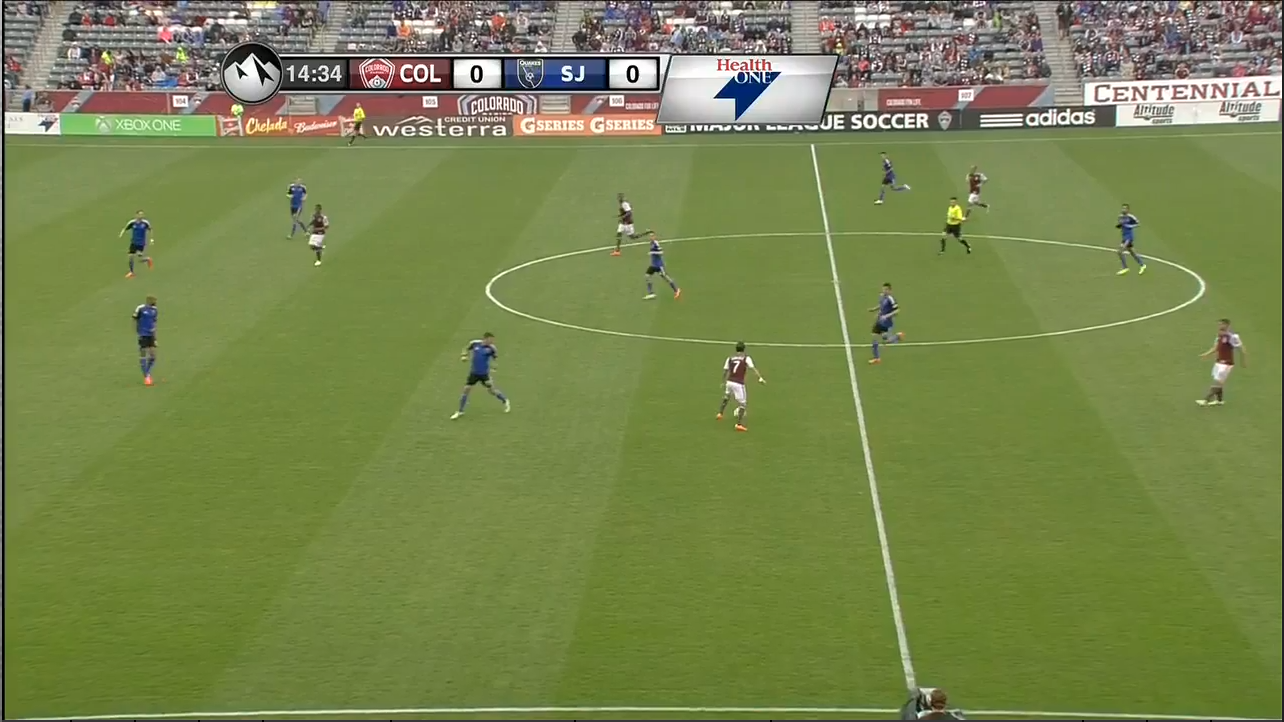 This is at home. Against one of the worst teams in the league. And neither of his fellow two midfielders — Nick LaBrocca and Dillon Powers — has the slightest interest in moving into the attacking half.

Mastroeni built an outstanding career as a no-nonsense defensive midfielder, so I guess it makes sense that he's setting up his team as one gigantic defensive midfielder — stay compact, don't take risks, keep the ball in front of you. Watching a game you feel kind of sorry for Sanchez, who's actually trying to do things, and you wonder what the heck happened to Powers, Chris Klute, and Deshorn Brown, who were three of the most exciting young players in the league last season. Mastroeni has switched the team to a diamond midfield and the team is clearly struggling to adjust.

Much of the problem is that their forwards have not played well enough to create their own chances. Brown looks locked into a sophomore slump and is snatching at everything. Edson Buddle is continuing the long twilight of his career in his quest to reach the 100 goal milestone, but doesn't look like he can create separation anymore. Gabby Torres, Colorado's first ever Designated Player, has as many offside calls (4) as shots (4) this season. And young Cameroonian forward Charles Eloundou has played all of 21 minutes this year. It doesn't help them that they have little build-up. The Rapids lead the league in long balls per game with 63. They're pure route-one.

Still, the midfield is deep and the defense has become solid now that Shane O'Neill is again pairing up with Drew Moor in the center. He was moved to make room for new Austrian right back Thomas Piermayr, who looks good enough. And Klute is still the young left back who was hearing national team whispers last season, though he's been stunted somewhat by Mastroeni's tactics. They're covered by the base of the diamond, who thus far looks to be second round draft pick Jared Watts. Obviously a player that raw is going to need time to adjust to the pro game, which is probably why the sides of the diamond are hesitant to push too far up and leave him exposed. Powers would normally be (an important) one of those sides, but he's questionable for the game. So we may have a Nathan Sturgis return to CenturyLink instead.

One relief for Seattle may be that Colorado isn't particularly foul-prone. That may change against the Sounders, as it has for other teams, but for now they have one of the lowest fouls per minute rates in the league. In fact, they're not particularly physical at all. They're last in the league at duels won, last in the league at tackles won per game, and second to last in recoveries. Honestly, a team with those stats has no business being near the top of the standings. Thus far they've gotten along just filling passing lanes against a pretty weak schedule.

If Mastroeni keeps up the diamond, the key for Seattle will be to attack it with width and with fast switches of the ball to take advantage of the midfield's narrowness. An interesting factor is that Leo Gonzalez is likely out for this match, setting up a probable start for Dylan Remick. Leo's the more defensively stout player, but given Colorado's timidity Remick might be the better start here anyway. His penetrating forays up the left touchline mirror DeAndre Yedlin's on the other side and can help provide the width to bypass the Rapids midfield.

If Seattle is relying on the wingbacks for width, they'll want a responsive midfield to help cover. And conveniently, Brad Evans may be available again for this match. His positioning is generally excellent and he can cover for Yedlin, which has occasionally been a problem while Evans has been out. A pair of him and Osvaldo Alonso should provide adequate cover for the fullbacks as well as the distribution to the flanks. In addition I'd strongly consider starting Gonzalo Pineda, who's also grown into a solid presence in the midfield.

That's basically an argument for a 4-3-3 or a 4-2-3-1. That's an awkward request for the front line, since Obafemi Martins and Clint Dempsey have clearly played very well as a forward pair. To make a 4-3-3 work you'd probably have Dempsey coming in from one wing and Lamar Neagle or Kenny Cooper from the other. Still, I think it's worth a shout given the ability to free the fullbacks.

The (frankly much more likely) alternative is the buckety 4-4-2 Seattle has played in Evans' absence, with Brad either swapping in for Pineda as a holding mid or at right mid for Neagle (who would likely shift to the left). Though I'd prefer the other one, that's a lineup I'd be happy to see and I think either one is good enough to either trouble the Rapids defense all game or force them to pin back enough to prevent trouble that the Sounders are under little pressure themselves and can spend the game trying to unlock a packed in defense. That's an assignment that's often eluded Seattle in years past, but one that Martins and Dempsey seem to be perfectly suited for.