There's still plenty of room for improvement, but the last two weeks the Sounders have shown they are capable of some stellar buildup play.

Ever since the Seattle Sounders first hired Sigi Schmid, the promise was that they would play an aggressive, attacking style of soccer. That was the guiding principle, at least in theory, throughout the Sounders' six years in MLS.

As we know, principles are nice and might sound great, but the reality hasn't always been the same. The Sounders may want to attack, they may have players who suit an attacking style, but winning games has and will always been the real guiding principle and pragmatism has often won out.

But there have also been times where these philosophies have intersected. This might be one of those times.

The Sounders are currently on 14 goals through seven matches, a solid 2 goals per game average. That's the second best in MLS, with just one of those goals coming from the penalty spot.

It's not just the number of goals, either. It's how they are scoring them. They are doing it from set pieces, from counter-attacks and, most satisfying to those among us who strive to play the "beautiful game, with patient passes and killer final balls. Against FC Dallas, the Sounders had an eight-pass sequence lead to the game-winner. Here it is in its sped-up glory (the first pass is off camera):

Against Chivas USA, the Sounders improved on that, stringing together 10 passes on the game-winner. Again, the sped-up version with handy, dandy counter:

This was an even better example of patience in the build up. As you can see, the Sounders were content to pass the ball around the back quite a bit before finally moving it into the attacking half. But once they did, it was Gonzalo Pineda who had the pass that opened everything up.

With Chivas down to 10 men, they were stuck mostly guarding space rather than players. Pineda found himself at the midfield stripe with no one within 10 yards of him. 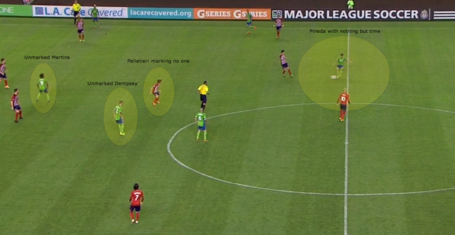 Pineda deserves full credit here for not wasting that space. A less experienced player may have been tempted to take a couple touches and survey the field, but Pineda quick picked up his head and sent in a 35-yard pass on the deck to Obafemi Martins who was left wide open despite having two defenders relatively near him.

It's also notable that Pineda looked to Martins, rather than Dempsey or even the totally unmarked Osvaldo Alonso. If the ball had gone to Dempsey or Alonso, those two deep defenders probably don't get drawn out. Worth noting that the biggest culprit here may end up being Augustin Pelletieri, who is totally caught in no-man's land.

Once Martins gets the ball, there's not much Chivas can really do other than hope the Sounders mess up. Martins' one-touch pass to Dempsey is the exact opposite, and the ball is quickly heading toward the Chivas goal with plenty of defenders but none of whom are well positioned to stop the play.

Neagle is another complicating factor for Chivas. And while none of the four defenders seem remotely worried about him streaking in off the wing, you can rest assured that Dan Kennedy was aware of him. In fact, if Dempsey had chose to, he probably could have sent a ball toward the goal for Neagle. The dangers there, though, would have been Kennedy coming off his line to snatch it away.

Of course Dempsey doesn't do that, and hangs onto the ball for a couple more touches before putting in Martins. 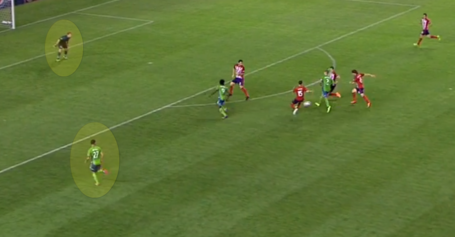 The only chance Kennedy has here is coming off his line. I have to believe that Neagle's run is at least giving Kennedy some pause. Even if that pause was only for a breath, it was just enough as Martins runs onto the pass and chips Kennedy just before the goalkeeper arrives.

The recurring theme here is the Sounders' ability to pick out the right play and to do so decisively. That we've seen plays like this two weeks in a row suggests it's a repeatable skill. If so, we should be in for a fun year.