Sigi Schmid is establishing a team identity and it isn't as simple as "Clint Dempsey." It is about a pace of play and the demonstration of belief in a higher talent level than most teams in MLS have at their disposal.

The Seattle Sounders FC attack is potent. The goal-scoring numbers make that clear. It isn't just Clint Dempsey, but a multi-headed beast that is outscoring opponents at a strong rate. The defense is giving up goals. Shutouts are rare and that could indicate that this will be an issue that could be exploited throughout the year. 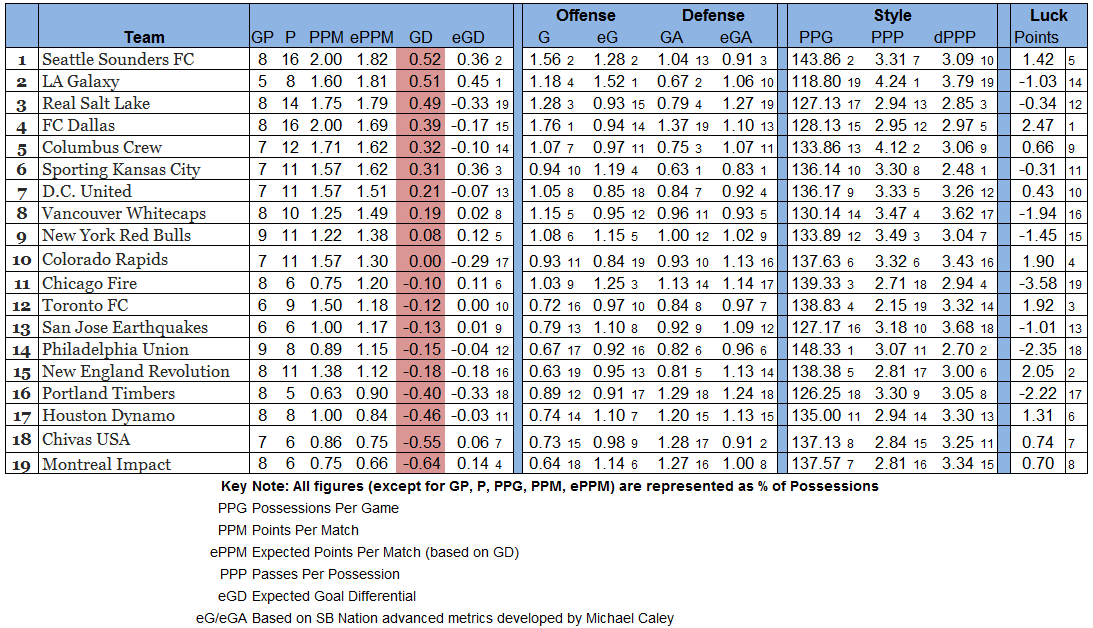 Seattle's attack, defense and pace all in top 3 in MLS

Seattle's Run & Gun is creating the perception that the team is weak defensively, but it is only perception. The pace of play for the team is frantic. They push the ball forward on the ground, through the center of the midfield, as quickly as possible. Risky passes are second nature and of almost no concern.

The nature of this strategic choice is most easily recognized in multi-pass scoring sequences. This one took 19 seconds and six passes to go from defensive 18 to a goal.

With ball winners scattered throughout the midfield in addition to a defense that forces turnovers Seattle's core philosophy of rapid transition is sped up from previous seasons. When a Seattle player gets the ball patience is infrequent. If they don't have an obvious pass they may just try the insane. The midfield is just the space between where they score and where they never want to see the opposition.

There is a confidence that a Sounder will score more often than a non-Sounder will score. This confidence is reflected in actual behavior and numbers. By pushing forward in a Paul Westhead-meets-soccer Run & Gun (if you prefer an American football metaphor think 'Hurry-up Offense') the quality of players and depth of the bench are demonstrated. If Seattle players tire, they are replaced by two-time 18-goal scorer, a US National Teamer, a 45-goals-in-history journeyman. When a team like the Philadelphia Union gets tired they replace their starters with Conor Casey or Antoine Hoppenot.

Pace of play leads Seattle to scoring advantages in the final 30 minutes of the game, too. But pace also establishes the nature of the game being played. Weak teams throughout sports will try to limit the total number of possessions and slow down the game. Teams with lesser talent do this because by narrowing the margins they increase the influence of chance or luck in the result. In a game like soccer with only 2.5 goals per match, chance/luck have huge influences. One goal is 40% of the expected goals in a game. In MLS so far this year, there are actually 2.82 expected goals per game and one goal is 35.4% of that total.

But in games with the Sounders, that expected goal number goes up to 3.15 (second highest in the league). A single goal is only 31.7% of the result. Every goal is less important in a Seattle match than the standard MLS or soccer match, because there are going to be more of them. The Run & Gun lowers the value of individual goals. By picking up the pace, Seattle decreases the influence of luck and further asserts player quality advantages.

At the end of the year, with this kind of tempo Seattle's pace should also help maximize its goal differential. The Galaxy have a higher expected goal differential per 100 possessions, but average to this point in the season 77.7% of the possessions that Sounders FC does. In a tempo-free environment, LA would be ahead of Seattle, but pace is a real, measurable thing. The up-tempo nature of the Rave Green means that if early patterns hold, the Sounders will have a higher expected goal differential than the Galaxy. This means that the advantages Sigi's team has against weaker teams will display on the table and in tie-breakers (GD is the 2nd tie-breaker after wins).

It is still early. So there is a fairly high variance between zonal-based expected goal models (TempoFreeSoccer actually applies the SBN model) and actual goals. Those should regress or normalize over the year. There is less variance in the possession per game metric and passes per attacking/defending possession. For example the Galaxy do not have a single match over the league average of possessions per match. Seattle has two games below league average and five above league average. There is also an interesting note. In MLS, as the season goes on, most teams slow down and concentrate on longer passing sequences. Passes per possession will go up. Several MLS sides, Seattle being one of them, will likely average more than 4 passes per possession by the end of the year. If you are the type that thinks that the number of passes before a turnover is an indicator of league quality, you'll note that this year is already better than last year when you compare the ppp numbers from 2013 to 2014.