Clint Dempsey gets the highest individual score of the year so far for his commanding performance in the 4-1 domination of the Rapids.

Sounder at Heart readers loved what they saw in Seattle Sounders FC’s impressive 4-1 victory over Colorado on Saturday. DeAndre Yedlin and Djimi Traore finished just fractions below a "good" score with 707 ratings cast in this week’s community player ratings. All the rest of the players finished with even higher ratings, especially the strike force of Obafemi Martins and Clint Dempsey, who both were above the 8 average that signifies "great" in our ratings chart. Both Oba and Deuece received many perfect 10s from the community this week.

Chad Marshall: 7.28 (8) -0.72. There was some discussion about Chad’s role in the goal scored by Colorado. That may explain why more people scored him a 7 than an 8 this week. I’m still not convinced he did anything wrong. On the plus side he got an assist on the goal from the corner kick. Either way readers still scored him "very good" in the victory.

Gonzalo Pineda: 6.71 (8) -1.29 The difference between my scores and the community’s scores was highest on the Sounders two central midfielders, Alonso and Pineda. Both finished right near a "very good" 7 with community raters while I had Pineda at 8 and Alonso at 9. I’d love to hear some discussion with this one on why all of you think that is. Was I simply too high in my judgment? I personally thought that both were stellar, Alonso in particular. His passing was nearly perfect at 94 percent on 83 pass attempts. As much as the attacking credit needs to go to Dempsey and Martins, I think this win was as much to do about how this pair completely controlled the midfield, neutralizing the Rapids’ new diamond formation with the exception of the first 10 minutes and the Rapids’ goal-scoring sequence.

Lamar Neagle: 6.72 (7) -0.28. I generally try to ignore the really obvious outliers when I talk about the community ratings. Some people don’t take it as seriously, I guess. Thankfully so many people are taking part in this new-for-2014 feature that the averages remain valid despite one or two outliers. Still, I’m really curious about the one person who gave Lamar a 2 for this game. The rest of this person’s ratings seemed reasonably close to the rest of the community. It may be a case of someone maybe hitting the wrong button. But I am genuinely curious. So if the man or woman who gave Lamar a 2 is out there and really meant to give him a 2, I’d love to hear from you what you saw that would cause you to give out an "awful" rating when so many others thought he was "very good." And everybody else, if this person does step forward, be kind and let them say their piece without recrimination. Maybe we will all learn something.

Clint Dempsey: 8.84 (9) -0.16 Deuce’s rating here is the highest community rating of the season for an individual – well-deserved for an outstanding show of passing, ball-control, threat-creation and finishing. More than 100 people gave Clint a 10 rating for the performance. Clint was everything we were promised when he was signed in this one. And I’m sure the community agrees with me when I say "keep it up."

And from Sidereal, a graphic look at the ratings: 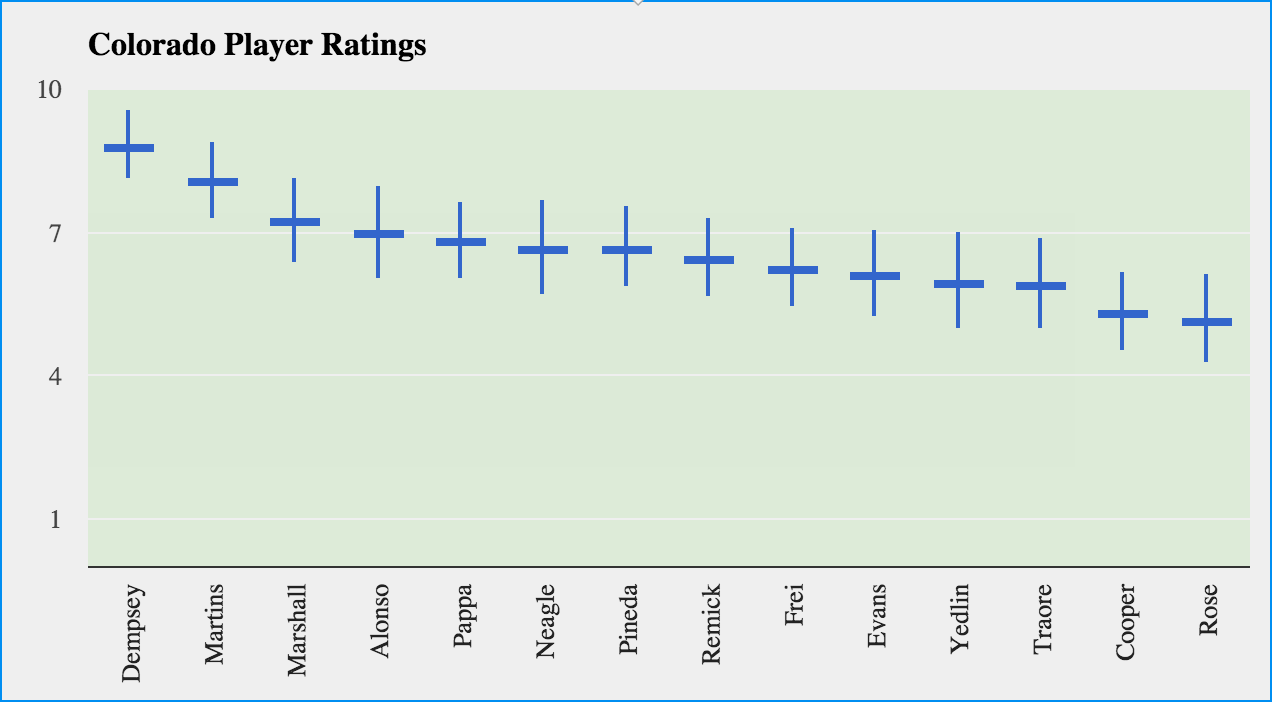